Wednesday Webcomics: I Love Yoo Is Fun and Addicting

It’s winter in my neck of the woods, and if you’re looking for a nice webcomic to binge read as you curl up on the couch with a cup of cocoa, I highly recommend I Love Yoo, hosted by Webtoon.

If you’re unfamiliar with Webtoon (as I was until this year’s SDCC), it’s a website that allows creators to host their comics. Anyone can publish on Webtoon (in the Discover section), and if you’re lucky, the Webtoon team will move your comic into the Featured section. This isn’t about Webtoon (which is amazing and everyone should check it out), but it is the inspiration. You see, I just started down the Webtoon rabbit hole about a month ago, and I’ve found so many great comics, I decided to try and do weekly recommendations for the stuff that I’m interested in. It was difficult to decide on which comic to recommend first, but honestly, it had to be I Love Yoo by Quimchee.

The comic centers around Shin-Ae Yoo, a young girl with a troubled past who through a series of unfortunate events finds herself the subject of fascination of half-brothers Yeong-Gi and Kousuke. No stranger to family drama of her own, Shin-Ae becomes enmeshed in the Hirahara family spectacle. 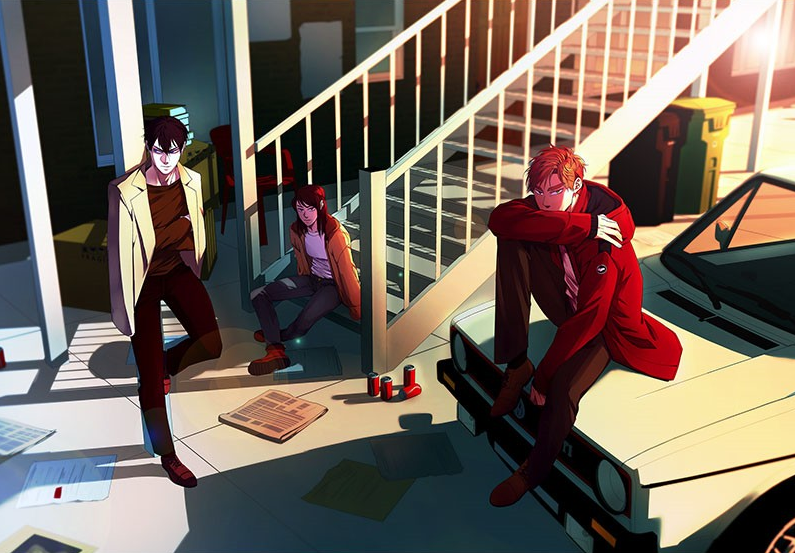 I Love Yoo is like a CW drama. There’s a lot of pretty people and a lot of crazy happenings and plenty of possibilities for any of you shippers out there. Should Shin-Ae end up with charming Yeong-Gi, reserved Kousuke, or dark horse candidate, cute as a button Dieter? Or should Shin-Ae not end up with anyone, because she’s a strong, independent woman who don’t need no man?

All of the characters are layered and compelling. You can’t trust your first impression of anyone because you’ll probably end up changing your mind at some point (except for Sang-Chul, you’ll probably always think he’s a jerk). You can’t help but want to know more about them and get invested in their lives.

A few of the comics I subscribe to on Webtoon have just begun publishing recently, so I only had a few chapters to catch up on. I Love Yoo has over 80. I stayed up until 4am to finish because I just couldn’t stop reading. It’s just a really entertaining story, and there is so much going on. Aside from watching the potential relationships unfold, there are a few mysteries that I need solved pronto. Some stuff you can figure out from hints dropped throughout the story (and sometimes from observant people in the comments section); for example, after a while, it’s fairly obvious that Yeong-Gi and Kousuke have different mothers, even if Shin-Ae hasn’t discovered that yet. But for other things – like what exactly happened between Shin-Ae’s parents (they split up in the prologue, and her mother takes her sister, leaving Shin-Ae with her dad) – have yet to be revealed.

Besides the story being entertaining, I’m a huge fan of the art style. I’ve always loved the anime style, even before I watched anime, and Quimchee is a great artist. Much of the chapters are filled with typical comic (or manga) panels and occasionally gorgeous full-length illustrations like the one pictured. (I actually had to scale the page down to take a screenshot.) Some of the chapters even have original music (a feature of Webtoon).

I’m a fan of all the comics I’ve subscribed to on Webtoon, but I’m addicted to I Love Yoo. I’ve read it all the way through three times already.

I Love Yoo by Quimchee updates on Fridays.