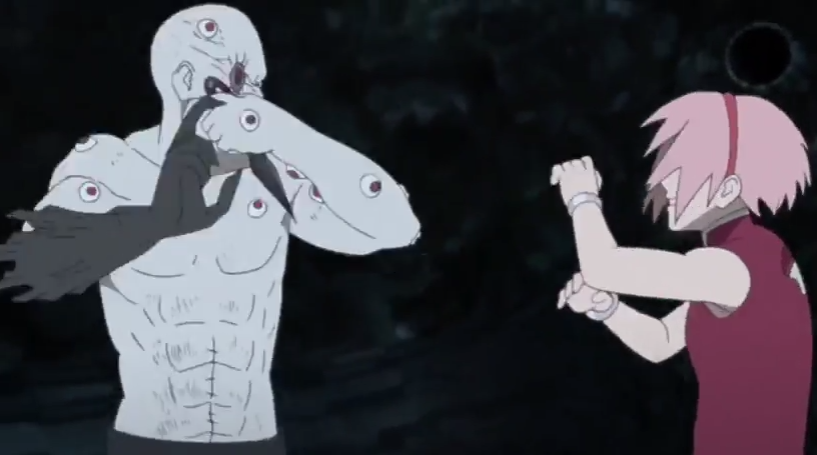 I don’t know about you all but I really enjoyed this week’s episode of Boruto: Naruto Next Generations. “Bonds Come in All Shapes” took everything good from Naruto Gaiden’s final chapter and made it better!

Even though Sakura is the main female character in the Naruto franchise, she hasn’t been given as much focus as the male leads. However, “Bonds Come in All Shapes” allowed her to shine a bit. The episode showed Sakura’s fight with Shin which the mini-manga series skipped.

Seeing Sakura having a taijutsu battle with Shin was awesome. The animation was also cool, showing how fast Sakura is at dodging weapons that Shin can control. While some fans might feel that the taijutsu battle could’ve been better, you need to realize that Sakura was fighting someone who has more than half his body covered in Sharingan-possessing eyeballs.

“Bonds Come in All Shapes” also went on to add extra fight scenes that showed how well Sakura and Sasuke worked together during a fight. I loved the sequence where Sasuke swapped places with Sakura. He knew Sakura’s plan to defeat Shin without talking to her and went along with her strategy.

The manga did reveal that Sakura and Sasuke were on a mission when she was pregnant so those two probably have experience with combo-attacks and two-person strategies.

“Bonds Come in All Shapes” brought an end to Shin’s arc as a villain. His little clones killed him because he wasn’t perfect anymore. I don’t know if the Boruto anime will ever address this, but the fact that Kabuto’s orphanage has a mini-army of Sharingan possessing children is going to attract people wanting to take such a power.

We also found out that Salad doubting whether or not Sakura’s her real mother was a massive troll that Kishimoto probably added to rile up the fandom when the manga came out. Some fans might be disappointed by the revelation but having Karin be Salad’s mother was going to take the franchise deeper into soap opera territory. So, I’m glad it didn’t go down that route.

What you thought of Boruto: Naruto Next Generations this week? Did you enjoy “Bonds Come in All Shapes”? Let us know.

1 thought on “Boruto: Naruto Next Generations 1×23 Review – Bonds Come in All Shapes”