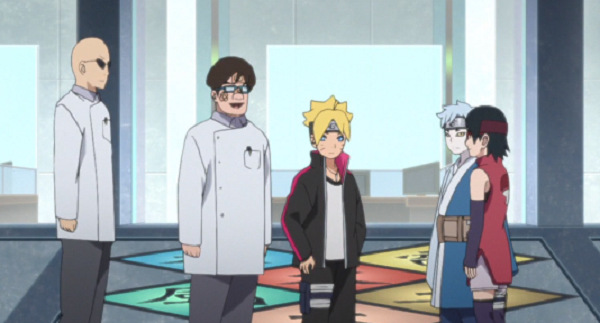 This week’s episode of Boruto: Naruto Next Generations, titled ‘The Byakuya Gang Surfaces,’ showed that the current arc will focus on Shikadai along with Team 7.

I didn’t review last week’s episode because it was boring. The only thing it did was set things up for ‘The Byakuya Gang Surfaces,’ an arc which I’m interested in seeing more of because of the role Shikadai is hinted to play in it. I like Salad and Mitsuki, however, I do think the anime needs to flesh out the rest of the characters too. And even though the manga hasn’t, the anime can, if the writers decide to.

We got to know that last week’s plot concerning the man in the bank was a diversion. Turns out the jewels from the bank were stolen by someone who’s able to not trigger any of the alarms. I liked how it was Salad who figured out the thief possessed a Kekkei Genkai and used Ice Style jutsu to rob the bank.

Of course, Boruto decided to apprehend the thief on his own, and it didn’t work out as he planned. I was surprised to see Salad siding with him. I thought she would have the sense to involve a grownup. Again, the fact that Team 7 doesn’t get into any kind of trouble for acting alone, when they’re told not to, feels stupid.

‘The Byakuya Gang Surfaces’ touched on a very serious topic, considering it’s an anime primarily for kids. It talked about whether or not stealing from the rich (even if they’re corrupt) to help the poor is the right thing to do. Boruto clearly has his doubts, and I’m interested to see the answer this arc will offer.

Coming to Shikadai, even though he’s more or less a carbon copy of Shikamaru, I like seeing him show up in the anime. He met a new character this week, a young boy the episode hinted at being the thief, and I hope we get to see Shikadai learn something from his encounter.

Also, we got to see Katasuke help Team 7.

What did you think of Boruto this week? Did you enjoy ‘The Byakuya Gang Surfaces’? Is the gang’s name supposed to mean something? Let us know.