I’m a huge fan of the Jurassic Park franchise and I was excited to watch Jurassic World. While I had my problems with the overall plot of the film, what annoyed me the most were some of the fan responses regarding the human female lead, Claire Dearing, played by Bryce Dallas Howard.

The promotional material before the film’s release set her up as character that the audience wouldn’t like from the start. She was presented as a stuck-up businesswoman; someone who the male lead, Owen Grady (Chris Pratt) made fun of. In all of the promotional material, Owen Grady was presented as the hero of Jurassic World: a hero who trained raptors!

However, once I started watching Jurassic World it became obvious to me that the whole film was going to revolve around Claire and a bunch of female dinosaurs. You can’t deny that compared to male led films, female led ones are close to nonexistent, especially big budget franchise films like Jurassic World. That’s why a character like Claire felt refreshing to me even though the whole plot had a lot of problems. But I’m not going to talk about plot holes and stupid decisions made by the characters. I’m going to talk about Claire Dearing and how she was the human heroine of Jurassic World. That’s not to say I don’t think of the T.Rex and the raptors as heroines too. More girl power I say!

Claire is the first main character we see in the film and immediately the audience gets the idea about who she is: a stuck-up businesswoman who has no time for a family. Now if you look past the surface you can see why she acts the way she does. Claire is the park’s operations manager, and so it’s part of her job to dress the way she does in the film. She can’t just walk around in a t-shirt and have a non-serious air around her, cracking jokes with the other employees. I mean, the film could’ve had her character wear a t-shirt and jeans but that would’ve looked more unbelievable to the audience than her running around in heels (which I will get to later).

The fact that she’s a park’s operations manager shows how intelligent and a capable person she is. She must’ve beaten countless people to get hired at the most successful park in the world. We all know how care-free the owner, Mr. Masrani, is and that’s why Claire has a lot to handle on her plate. In a sense, she is the de facto owner of the park. She’s also quick on her feet and very aware of her surroundings. She helped avoid the spill Jake Johnson’s character, Lowery Cruthers, would’ve made with his coffee before the dinosaur crisis occurred.

Judging by some fan 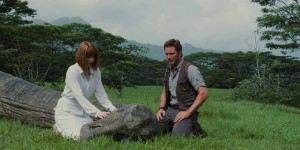 reactions, they seemed to have taken initial scenes between Owen and Claire to heart. The whole conversation the two had at Owen’s cabin made me cringe. If you go and listen to the dialogue again you’ll be able to understand what the real problem is. It wasn’t about Claire being a businesswoman and being stuck up. To me, it was about Claire not loosening up to Owen and sleeping with him. I mean he pointed at sex twice in the whole conversation and made it into something that Claire was incapable of doing, as far as he knew. It might have come across as comedic to some but to me it felt creepy and bordering on workplace sexual harassment. But I guess Claire didn’t think that because the two were supposed to be the romantic leads in the film. Yes, Owen looked fine as hell training raptors but he came across as a jerk during the jokes he made at Claire’s expense.

As for her not having any humanity in the film? Well, that’s just being hateful towards a character just for the sake of it. Thinking of dinosaurs as assets makes her job easier. She is not a zoologist, etc. She is a businesswoman and knows how to use ‘assets’ for the park’s profit. She doesn’t need to be close to the dinosaurs. That’s Owen’s job along with the other caretakers. It’s not like she lets the dinosaurs not get proper medical attention or starves them to death while managing the park.

She does have humanity in her, and that’s why she was so upset when she and Owen saw a herd of Apatosaurus attacked by the Indominus Rex. Her feelings were already there. She did think of dinosaurs as living beings or else she wouldn’t have shown such emotion.

She also immediately left everything to search for her nephews. She could’ve waited to send out some rescue unit to get the boys back or have Owen search for them alone. But she participated in rescuing them and didn’t sit behind the safety of the control room. She wouldn’t have done that if she didn’t love her family.

You might argue that she didn’t spend time with her nephews. Well, you can’t deny she was busy the day the boys were sent to her. You need to understand that their parents didn’t send them for a vacation. They sent them to their aunt so they could go over their divorce. Who knows how haphazardly the whole plan was made with Claire’s sister sending the boys to her the same day she had an important business meeting.

As the film progressed, the ‘real’ Claire came into light and that’s what I enjoyed. She took off her businesswoman persona because that wasn’t required of her anymore when the park started to fall apart. The real Claire put her own life on the line to protect her family and not because she magically started liking kids because of her ticking biological clock.

I personally liked the scene where Claire saved Owen from a Dimorphodon. Typically movies would have the hero save the heroine and get a kiss as a prize. But in Jurassic World we got to see Claire save Owen who then gifted her with a kiss.

The one scene that played down her character was when after saving her nephews they wanted to stay with Owen instead of her. Keep in mind that the nephews hadn’t seen Owen doing any heroic stuff but they had seen Claire shoot down a dinosaur and save Owen’s life. I guess the boys just liked Owen because he was a guy and their aunt was…well, a woman in heels.

Coming to the controversial footwear, I understand some fans having a problem with Claire running around the forest in heels. For me, while the choice of footwear was not the best, I think it made sense because she got ready for a business meeting that day. Had she known the park was going to fall apart, she would’ve wore something more practical. The director of Jurassic World, Colin Trevorrow, and Bryce Dallas Howard also had a lot to say on the matter of Claire’s shoes.

So, can a woman run around in two-inch heels while being chased by dinosaurs? Well, the actress actually ran in those heels during the filming of the movie. And I’ve personally seen women and young girls run around in much higher heels in case of emergencies. Seeing women not lose their balance in heels while competing with boys to be first in line when registering for next semester courses has always surprised me. And besides, Catwoman (a fictional character like Claire, with no superpowers) has been facing powerful beings for years and she hasn’t taken off her heels to do it.

To me the best part about Jurassic World is that the other characters, and the audience included, were more or less hoping for Claire to fail in some way. Her sister, Owen, and even Masrani told her to let loose and change for what they thought was better. Owen even raised his eyebrows at her choice of clothes when they went to look for the kids. 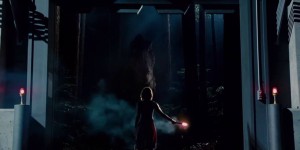 But Claire remained true to herself. She didn’t lose her balance once (talking about the heels here), and proved to everyone that she could do what was required of her and look good while doing it. She didn’t take Owen’s hand when they ran from the Indominus Rex and thankfully the writers didn’t demean her choice by making her fall due to a sprained ankle later on in the film. Instead she ended up being the one to save the hero and the kids from the Indominus Rex by putting her life on the line to bring out Tyrannosaurs Rex into the field.

Claire is the one who got the most character development in Jurassic World as we saw her shed her layers and show her true self. Compared to her, the rest of the characters, even Owen, felt like one-note cardboard cut-outs.

I liked Claire’s character. Is she the best female character ever? No. But she is definitely a refreshing sight to see in a film that seems to place being a male in high priority in almost every human involved scene.

Jurassic Park, which came out in 1993, did a far better job with gender equality. Dr. Ellie Sattler (Laura Dern) was never dragged down to raise a male character. Everyone took the female paleobotanist seriously and she was never made fun of even when Dr. Ian Malcolm (Jeff Goldblum) flirted with her.

Dr. Ellie and Claire are completely different characters and it’s not fair to compare them. Claire shows a different kind of female power. She shows someone who is in a dominating position in a man’s world and has to prove herself more than once to be taken seriously even if she has to do it in heels. I think that’s something a lot of females have to go through in their lives especially when surrounded by males in a workplace.

What did you think of Claire Dearing from Jurassic World? Do you think she deserves more from the fans? Let us know!

Avatar Studios Will Expand the World of Aang and Korra

“Scooby-Doo! The Sword and the Scoob” – DVD Review!

5 thoughts on “Character Analysis: Why Claire Dearing is the unsung heroine of Jurassic World!”