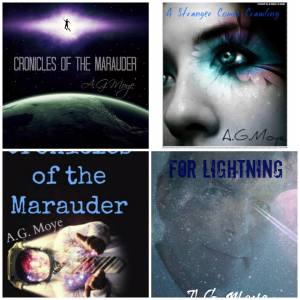 Today I have science fiction writer A. G. Moye with me. Check out our exclusive interview with the author where we talk about his enjoyable Chronicles of the Marauder series and up-coming works!

My father died when I was eleven, being one of the older children, I was expected to babysit the others. My mother remarried four years later and we moved from Arkansas to California. Boy, was that a culture shock! I started writing for fun. It became a stress reliever later to escape the trials of raising children and broken marriage. I remarried but kept writing. My second wife hated my stories; too much sex for her. It was 1987 when I purchased my first computer [and] I started the Lightning in the Tunnel series. The love of my life, Sammi, I married in 2000, and after reading, pushed me to publish. I didn’t know a thing about publishing, but I was soon to learn. Since 2010; I have learned a lot. I tend to work on two or three books at a time so when they are published, I seem to flood the market. This year I published one, but have three in editing and three I am working on.

When did you first start writing? What was your first written work (it doesn’t necessarily have to be published)?

I wrote some in school, but can’t remember much about those stories. The first book I completed was named The Adventures of Brandi, in long hand, it’s now in the hayloft. I re-read, updated, made changes and published it as Brandi’s Nightmare, my only mystery book.

What other authors have influenced your work.

Robert Heinlien jumps first in my mind; I loved his Tunnel in the Sky and have read it several times. F.M.Busby and Issac Asimov also come to mind. Jean Auel, I wish I could tell a story as good as she does. As you notice, I prefer science fiction, but do read other genres. 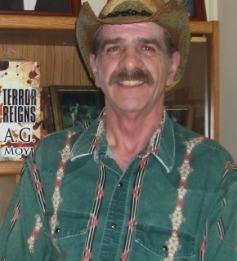 What can you tell about your Chronicles of the Marauder Series?

These stories chronicle Neil’s adventures in space. Upon meeting alien life forms, the story follows the relationships between the crew of the Marauder and the aliens. Neil becomes the moderator between humans and aliens, blending them into the Marauder.

What kind of readers will the series appeal to and how is it different from the rest of the works in the genre? I particularly found Neil quite interesting.

Science fiction fans that crave adventure and loveable aliens. Unlike most sci-fi captains, Neil was a convicted felon.

Upon Neil’s birth, he was put up for adoption. A family adopted him until the woman found she was with child, and returned him to the orphanage. She named him Neil Armstrong Andrews, the only good that came from it. Neil had a chip on his shoulder, winding up going from foster home to foster home, before growing up in the orphanage. Neil was smart, young and intelligent. After leaving the orphanage, he attended college on scholarships. He met and fell in love with a young rich woman, they elope. Although her family disfavor her choice, they accept it and welcome him into their world. His wife becomes pregnant and Neil is so happy he tells everyone. At one significant party, he brags about his wife being with child to her rich friends while playing billiards.

One young socialite comments, “Neil, are you sure you are the father? She has been bedded a time or two, even after she married”. Neil explodes, striking the man. One of his cohorts comes to his aid, Neil grabs the nearest pool stick and beats them within an inch of their life. The police arrive and Neil is arrested. His wife and her family disown him, leaving him to face the charges. He pleads guilty at the advice of his lawyer and goes to prison.

While he’s there, the family has the marriage annulled and she quickly remarries a rich man. Neil was distraught not knowing whether she had a boy or girl. Prison life had an effect on Neil, he was determined to change. Released on probation, Neil attends anger management classes.

Years pass and Neil’s luck finally changes. He won the lottery! Not just any lottery, but the largest lottery in history. With his newfound wealth, Neil pursued his lifelong dream of going into space. Using the Internet, he contacts scientists with unusual abilities. Neil enlists these misfit scientists and engineers to design and build the Marauder. The design was for interplanetary travel in the galaxy and the cost of the ship exceeded his winnings. Neil approaches others, but the Chinese and Australians were his biggest investors. Neil’s probation prevented him from traveling. So as a way of building his dream, “A Board of Directors” was created to build the Marauder. The rest is history, Marauder history, that is!

Out of all the number of books you wrote, which one is your favorite and why?

It’s a tie, Terror Reigns and Chronicles of the Marauder. Terror Reigns, because it is the first one of the Lightning in the Tunnel series, where I felt I became a decent writer. Chronicles, because I love the story and the main character, Neil. Even though in Book Two, Sockan (an alien) has my attention, Storm stands out, but Neil is still number one.

You also run two blogs. What can you tell us about them?

A lot of people are curious about starting their own blogs. Is there any advice you can give to people who have just started blogging?

Do not be discouraged if it is not successful right away. Comment on other bloggers’ post[s] and follow as many as you have time. Your blog will slowly draw followers and some will comment, especially if you keep it up. Follow all that follow you even if you don’t agree with some of the things they say on them. Find your voice and stick to it. Time is on your side.

Are there any future works we should know about? What can you tell us about them?

Right now, I am, as usual working on a couple of books. The one called IronHeart is a literary fiction, not a science fiction. It’s a story about a young man that has been living in a shell and his parents are killed in a car crash. He is forced to grow up where he learns his mother was a former prostitute and ran a ring of high class hookers.

His father had a secret life as a paid assassin with another family he was unaware of. CJ met his half brother and sister who knew about him, but he didn’t know they existed. CJ’s world only consisted of football and football only. Abrupt changes force CJ into a new world as he learns about females and their charms. He has a host of supporting characters that influence his development into a man.

You can check out A. G. Moye’s Amazon author page for more of his works.

Have you read books by A. G. Moye yet? Let us know!