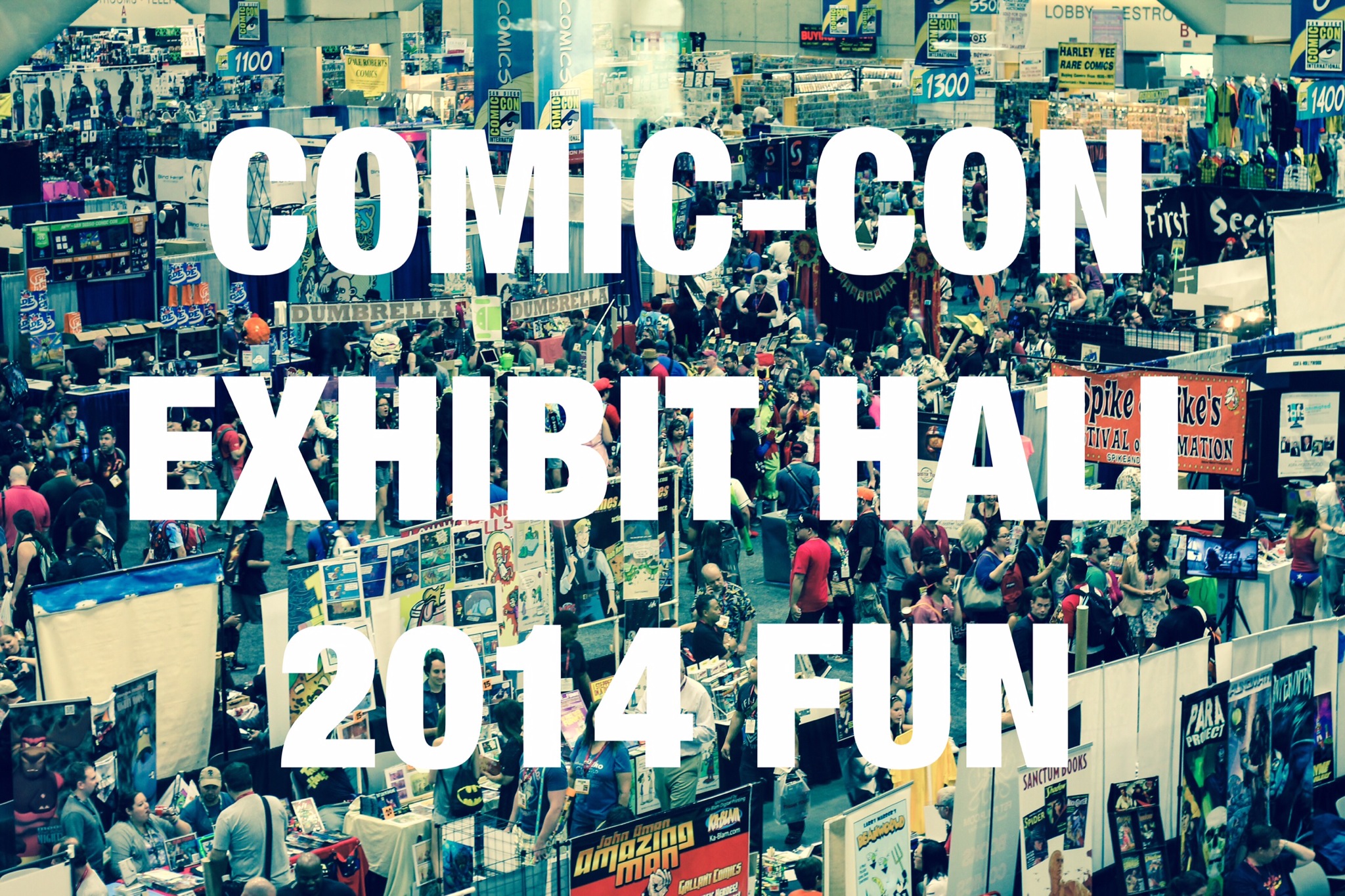 Looking back to the great San Diego Comic Con of 2014, the Exhibit Hall was the most wonderful place.

The Exhibit Hall is my favorite area of the SDCC, where dreams come true. Also a place where friendships begin, mighty contests, long hunts, great rewards, rare sights happen. This year, the area was also a place of surprises. Many exclusives did not sell out as fast as thought (many available online after the show). The area also opened as early as 9:00 am on the full days; surely an extra thrill for exhibits, dealers, and eager attendees.

I took some pictures, with added notes below; detailing my experiences and observations. This is my 20th year in a row exploring this massive room, now 615,700 square feet. This roughly takes a half-hour of slow walking through heavy human traffic to cross between the furthest ends apart. In between, there is lots of everything.

Here below, are highlights of my 2014 Exhibit Hall trek..

Welcome to the epic-center of the Exhibit Hall, where achievements come with patience. This year is more tame and orderly since most big Hollywood studios have either retreated to the back of the Exhibit Hall (Warner, ABC, NBC), or moved their operations outside the convention center (Dreamworks, Disney, SyFy). Much of the crowd was due to excessive lines involving the obtaining collectible show exclusives, free swag, and stalking celebs for pics. 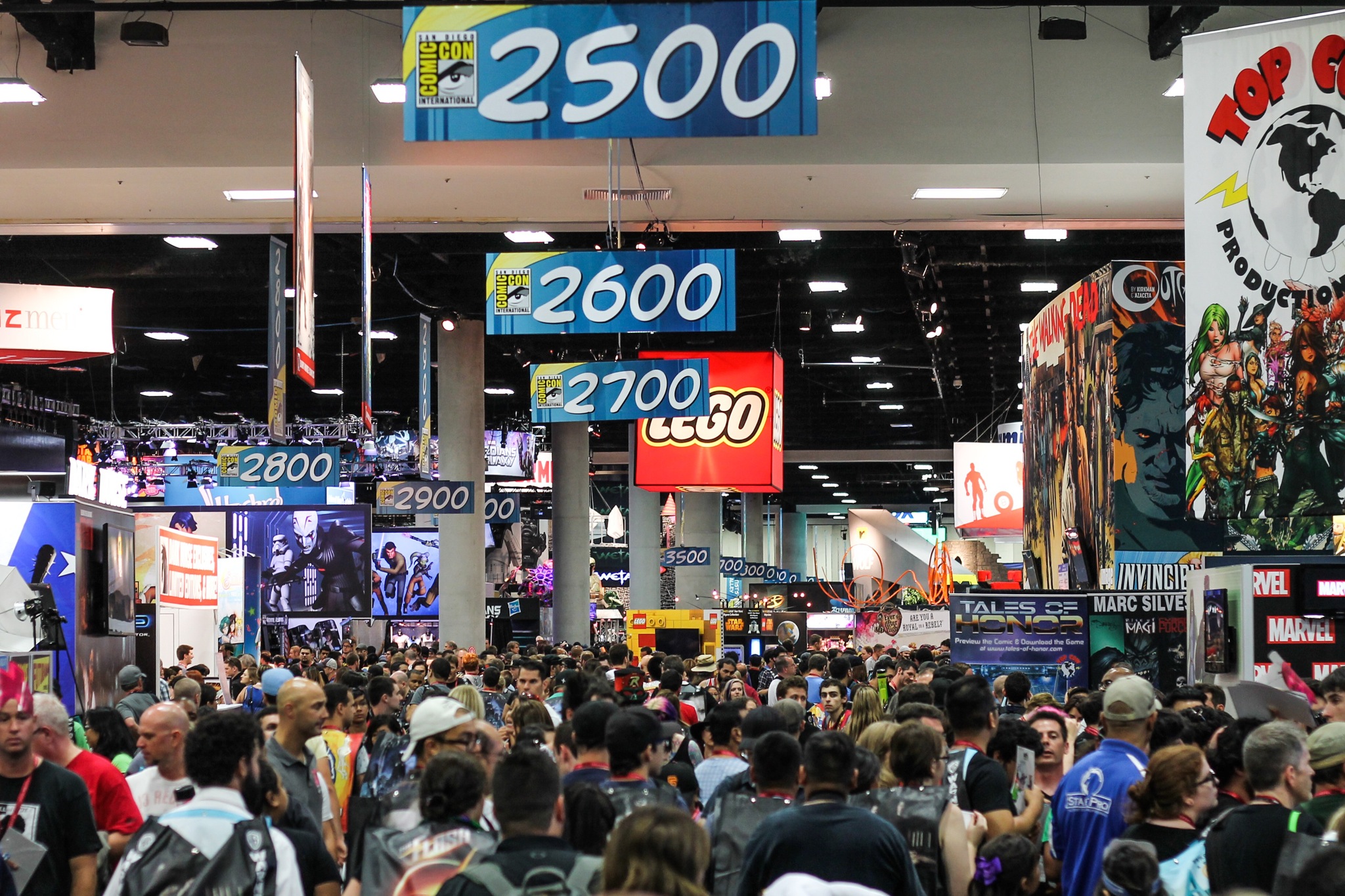 The Mattel/Hot Wheels booth, featuring the Vadermobile, or something like that. “The ability to destroy a planet is insignificant next to the power of a six-speed manual transmission,” said nearby Sith Lord driver. 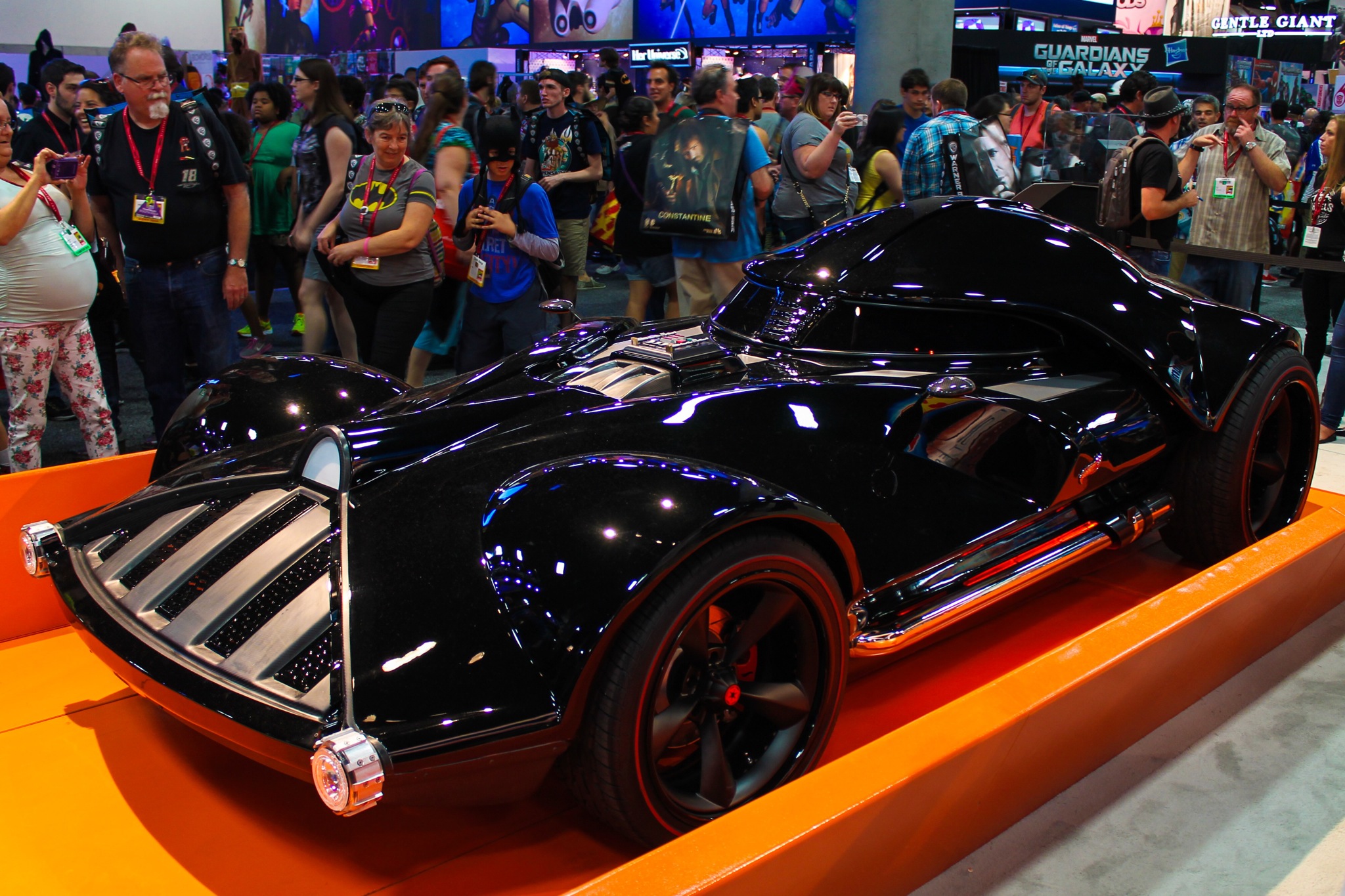 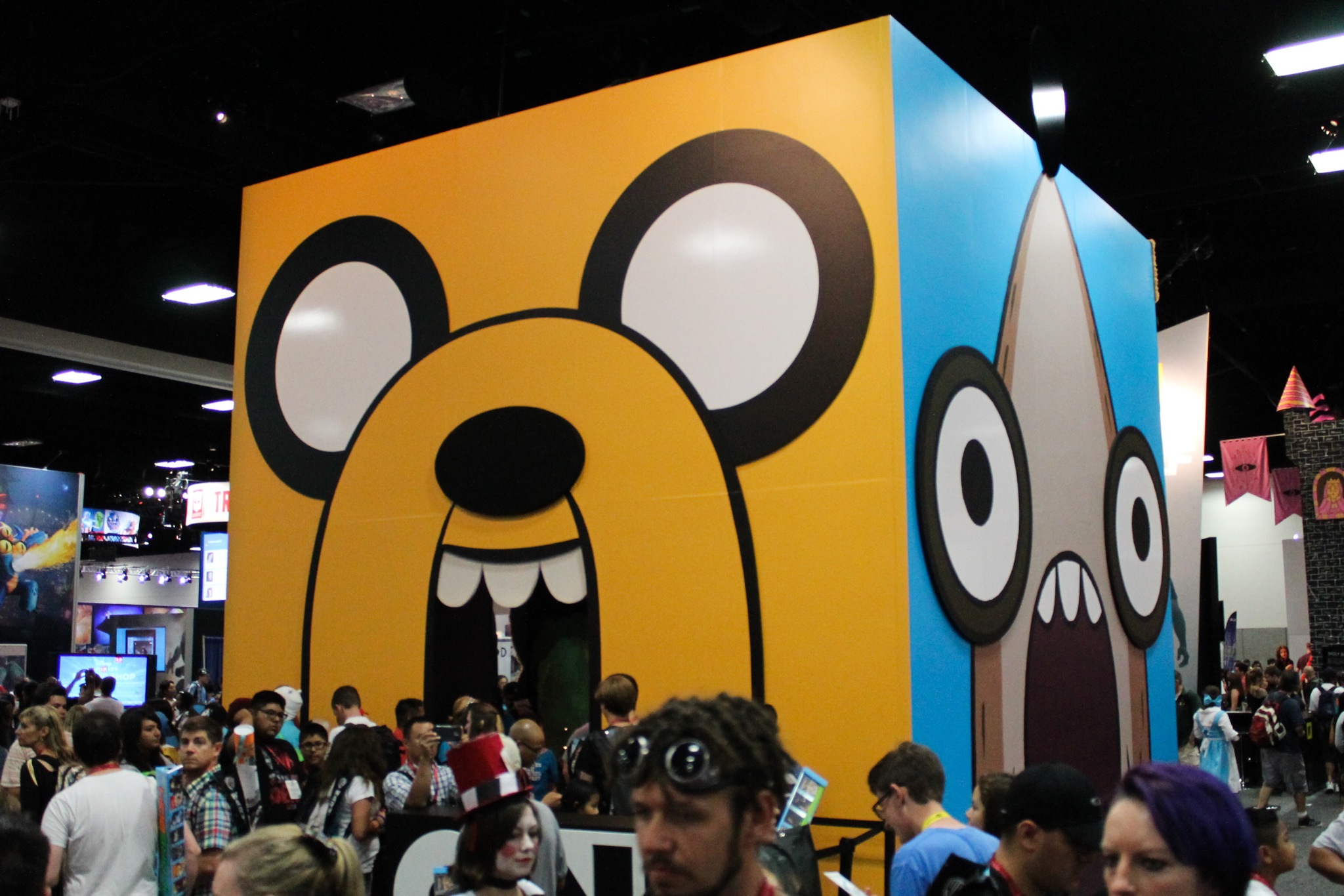 The DC Booth killed it with their usual promotion of comic book properties (never stop with those pins). But this year, much was dedicated to the 75th anniversary of Batman with costumes displays, and questionable art deco cowls. 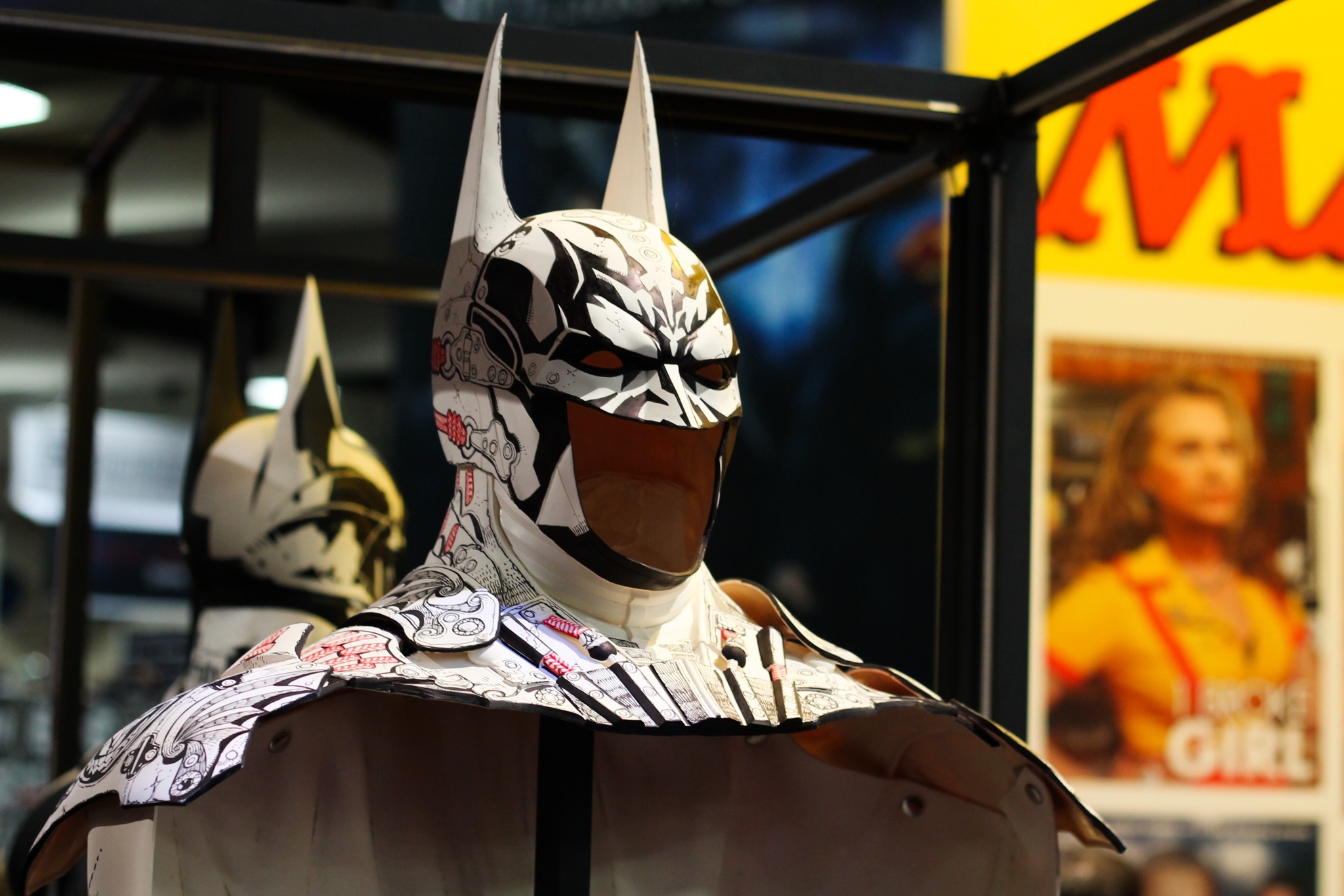 Guardians of the Galaxy was clearly the most anticipated science fiction/geek/comic book movie franchise this summer. Booths with related licensed product were wise to feature the talking gun wielding raccoon. Here, Lego put the coolness to epic Groot-level heights. 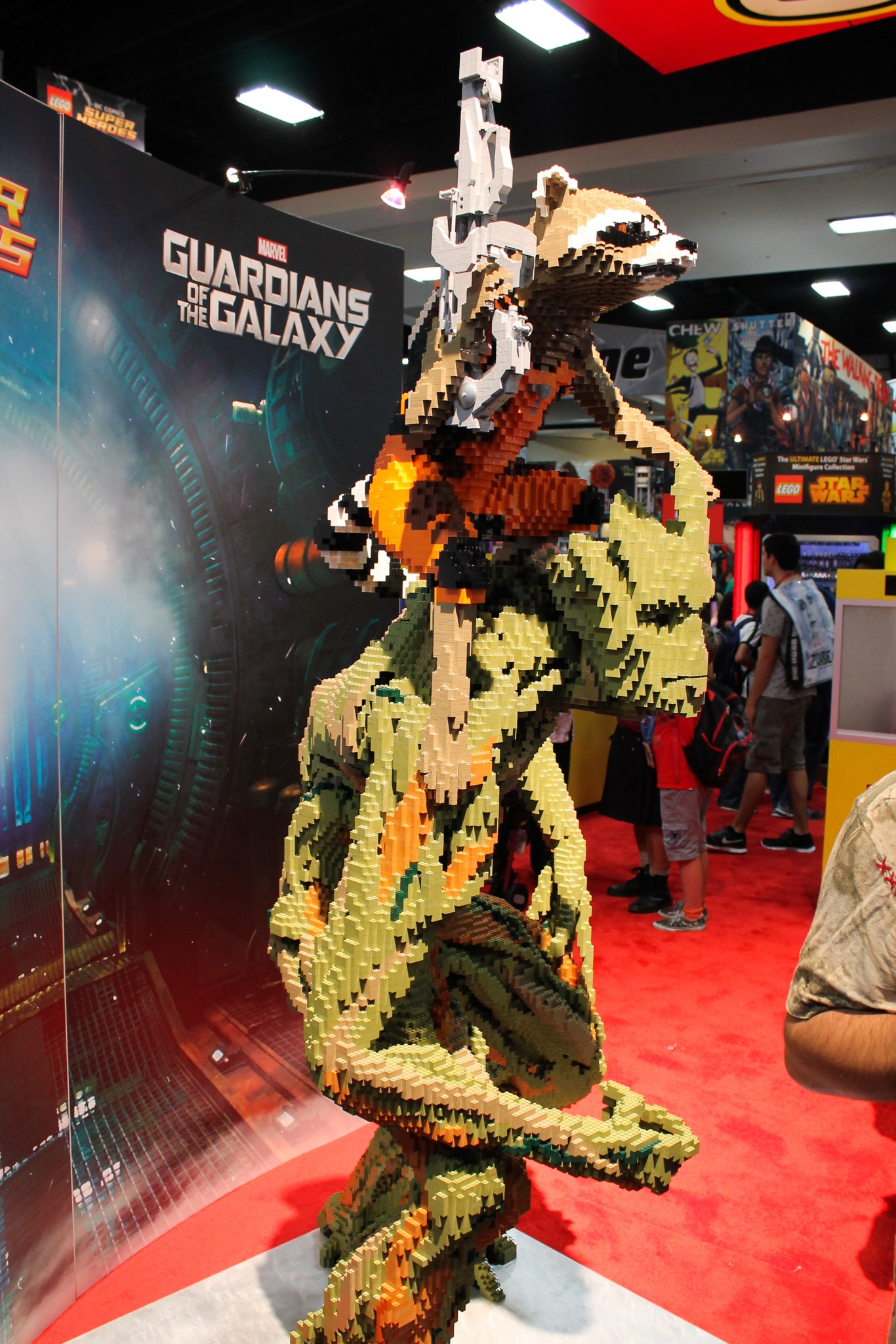 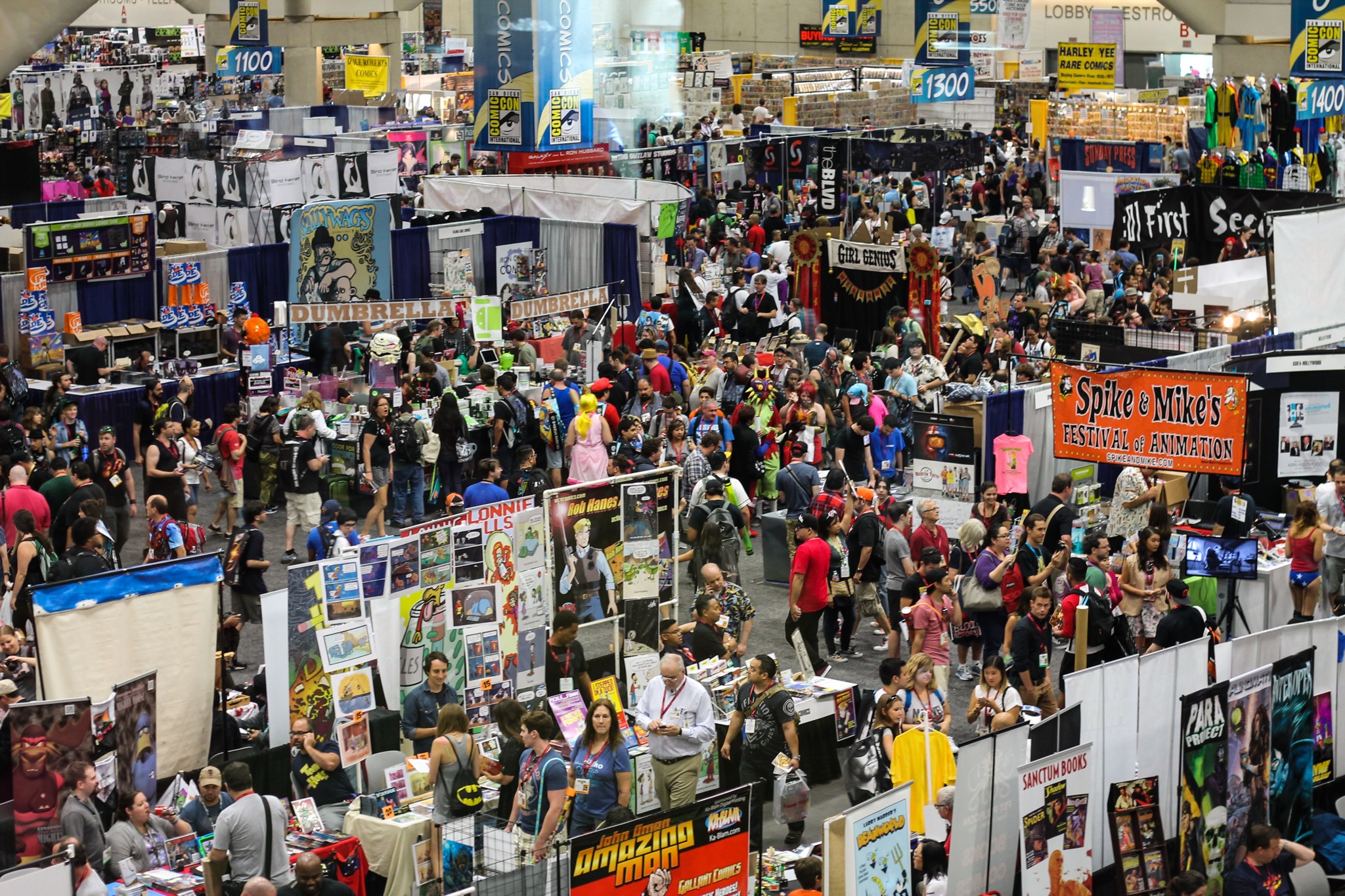 This is a typical comics booth where back issues can be sold. Back issues in my opinion, are dying. With so much accessible in digital form and inexpensive trade paperback collections, the novelty of collecting back issues has dwindled to hardcore collectors and nostalgic print enthusiasts. Still, they make for pretty displays. 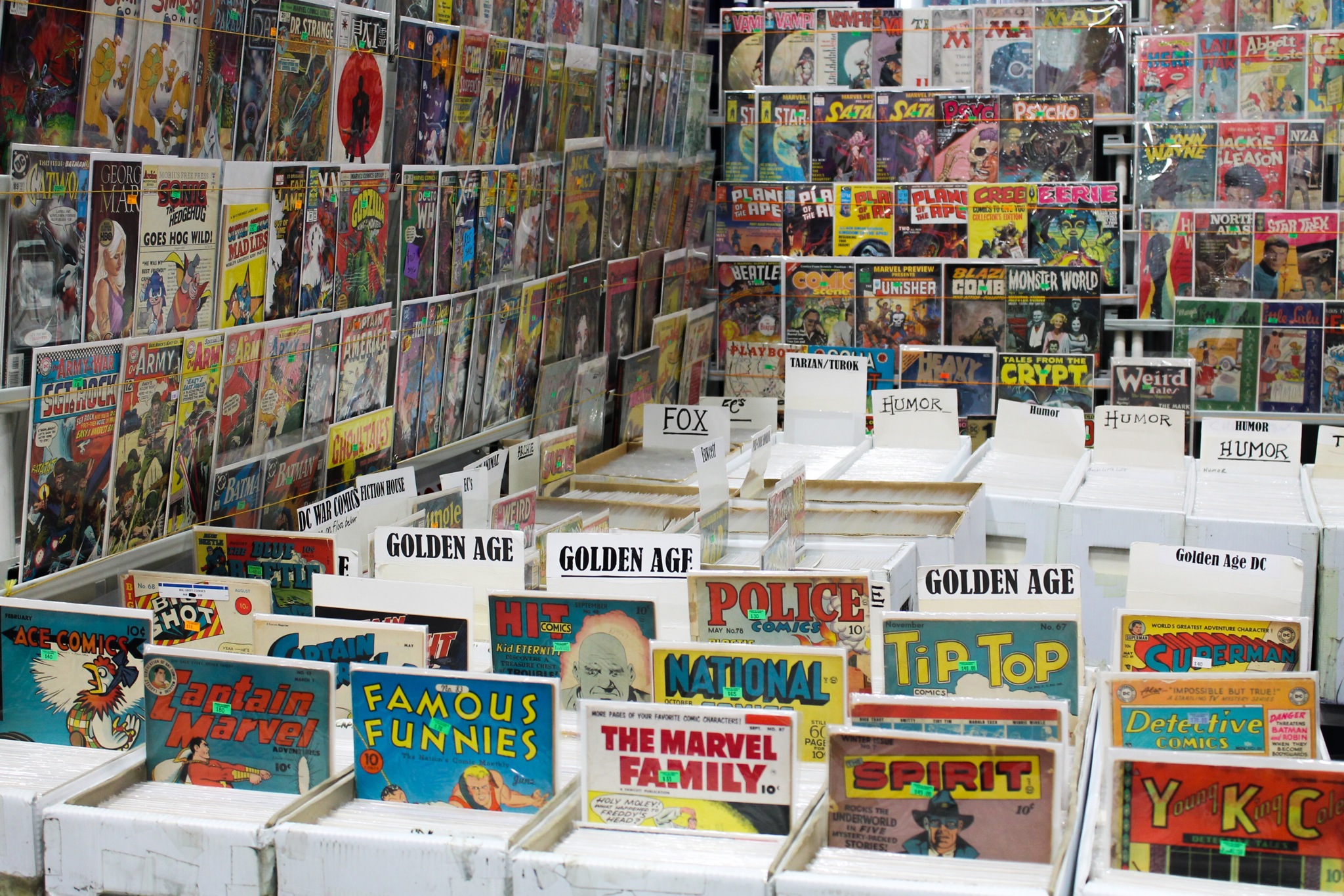 The Image Comics booth, the most recommended booth to con-goers curious about comics. Some personal series recommendations from this booth I now read and love are: Saga, Chew, East of West, A Voice in the Dark, Rat Queens, Invincible, Pretty Deadly. 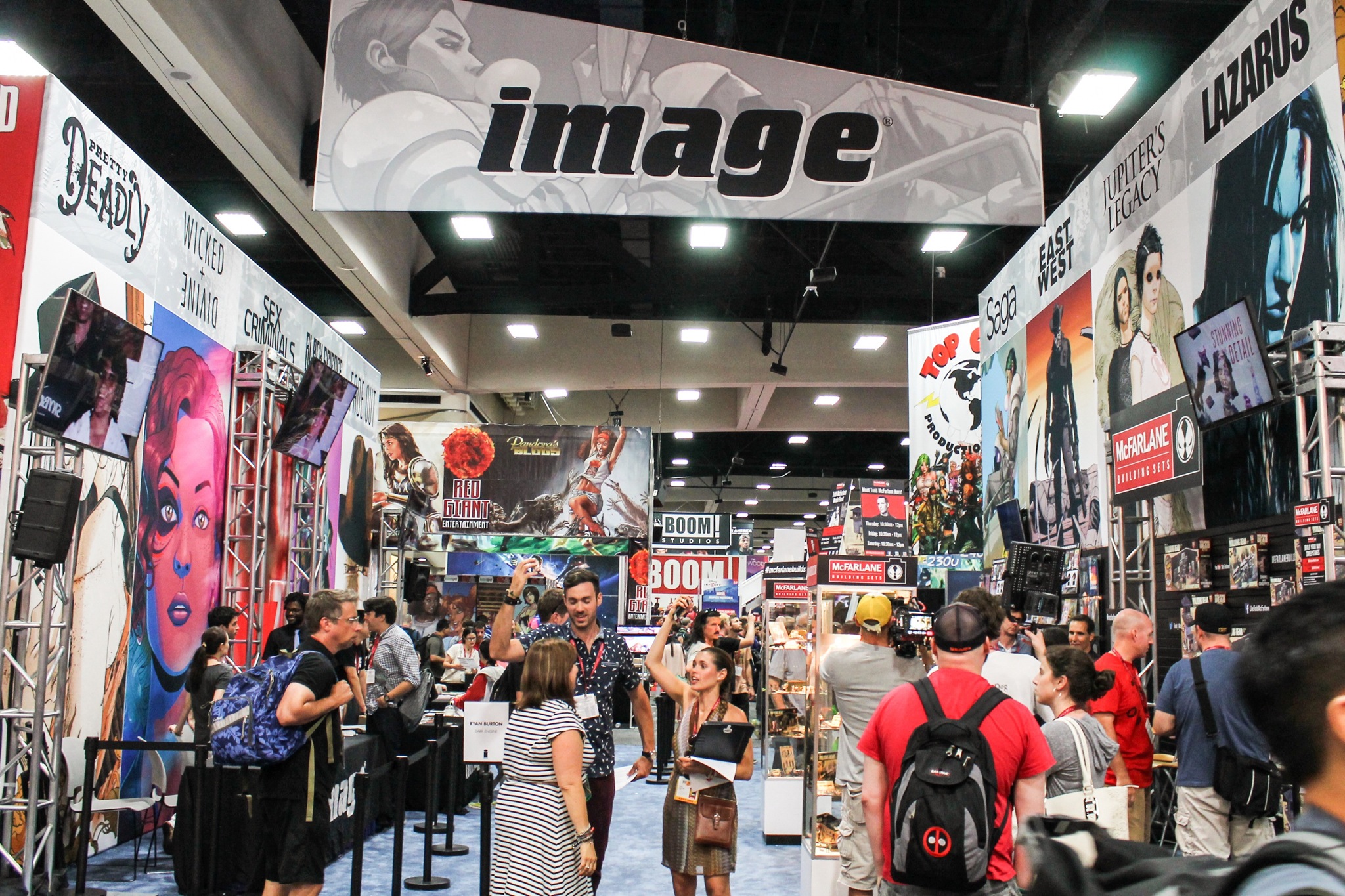 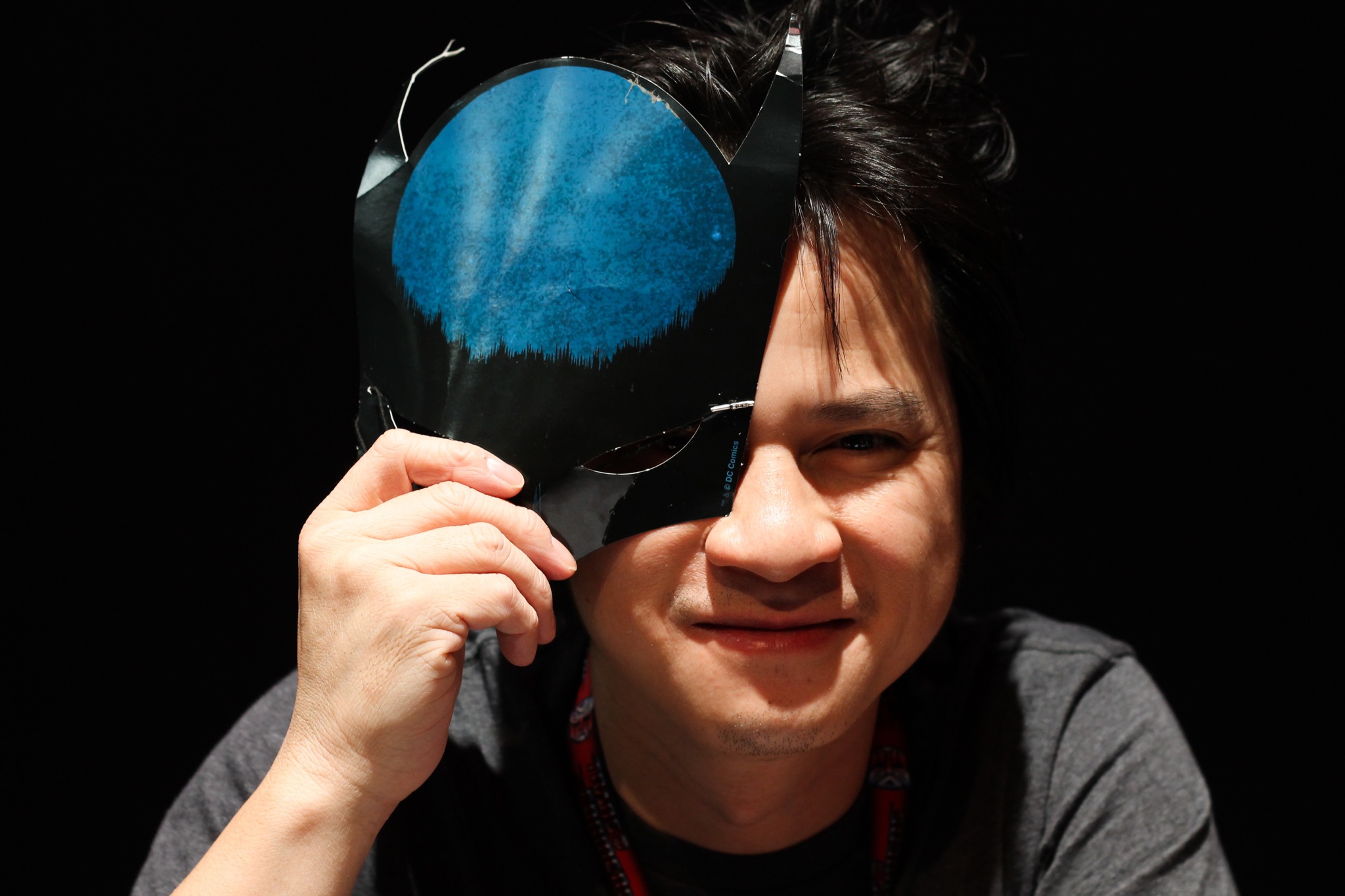 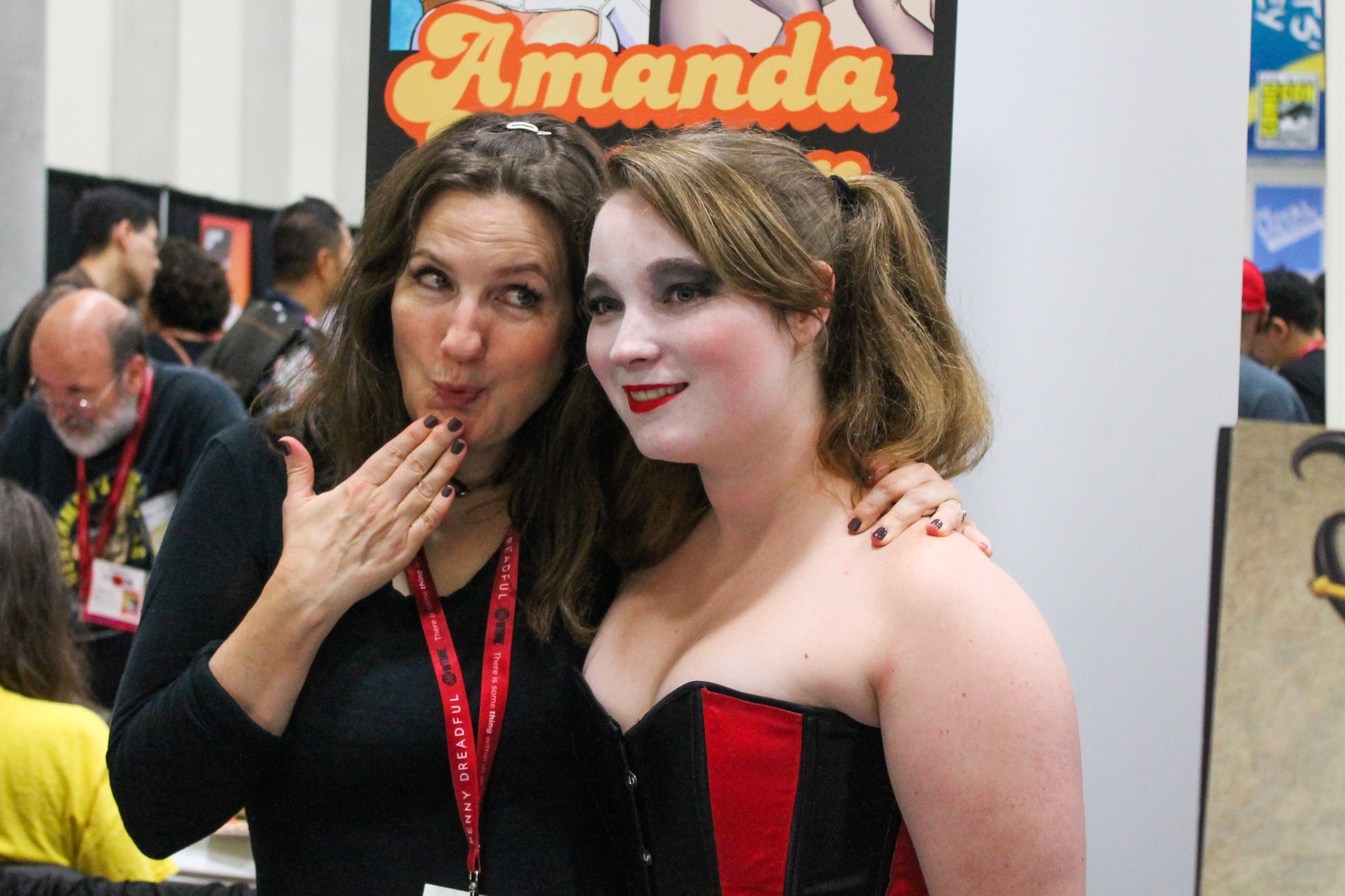 Jae Lee, one of my favorite longtime artists out there (and doing amazing work with the Batman/Superman series). 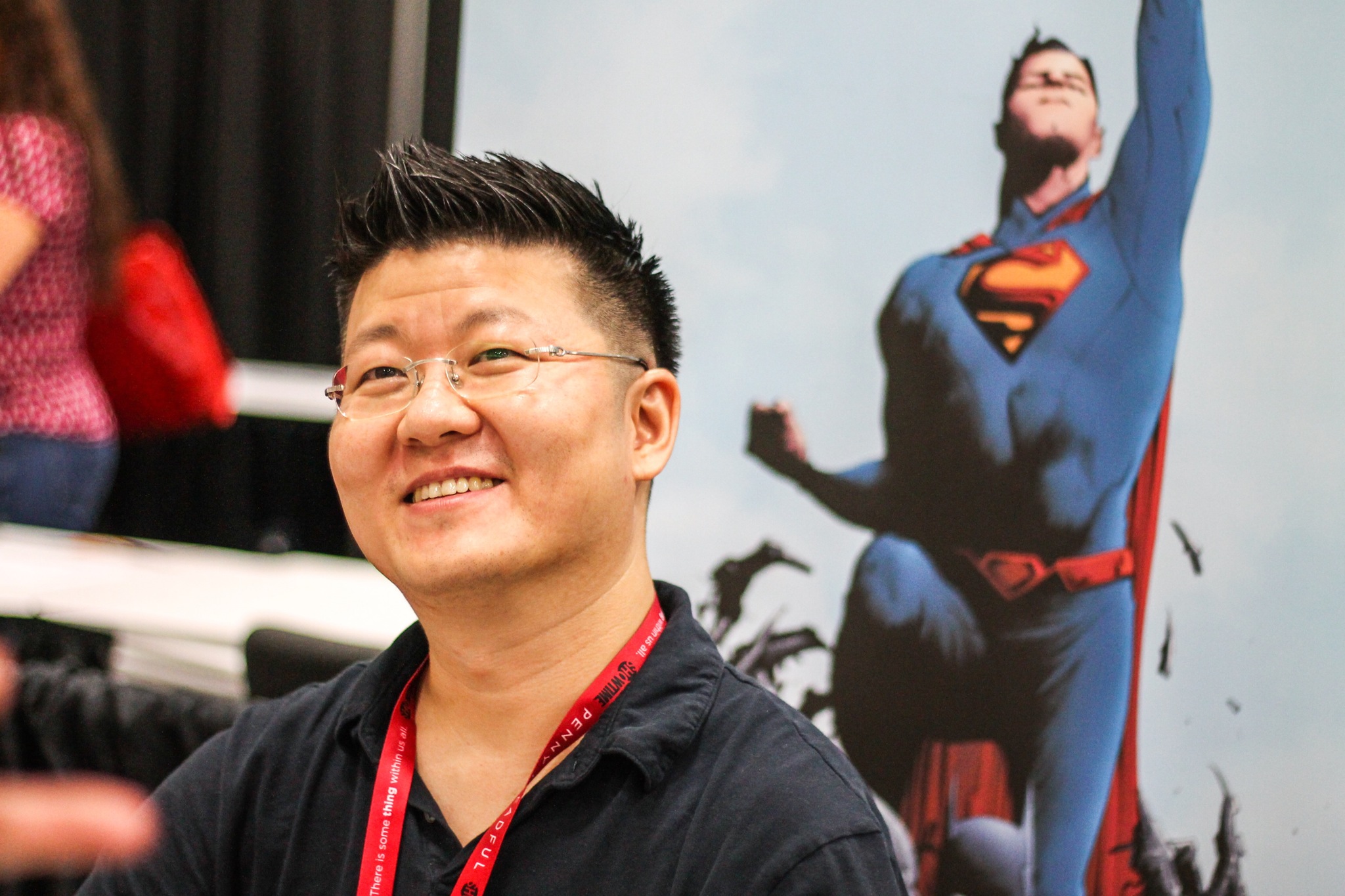 A 31-inch Shadow Stormtrooper, Jakks-Pacific exclusive from Comic Con; one of many show exclusives. “My friends, songs will be sung about this Comic-Con'” said General Martok, elsewhere holding his Magic: the Gathering Exclusive Plainswalkers set in hand. 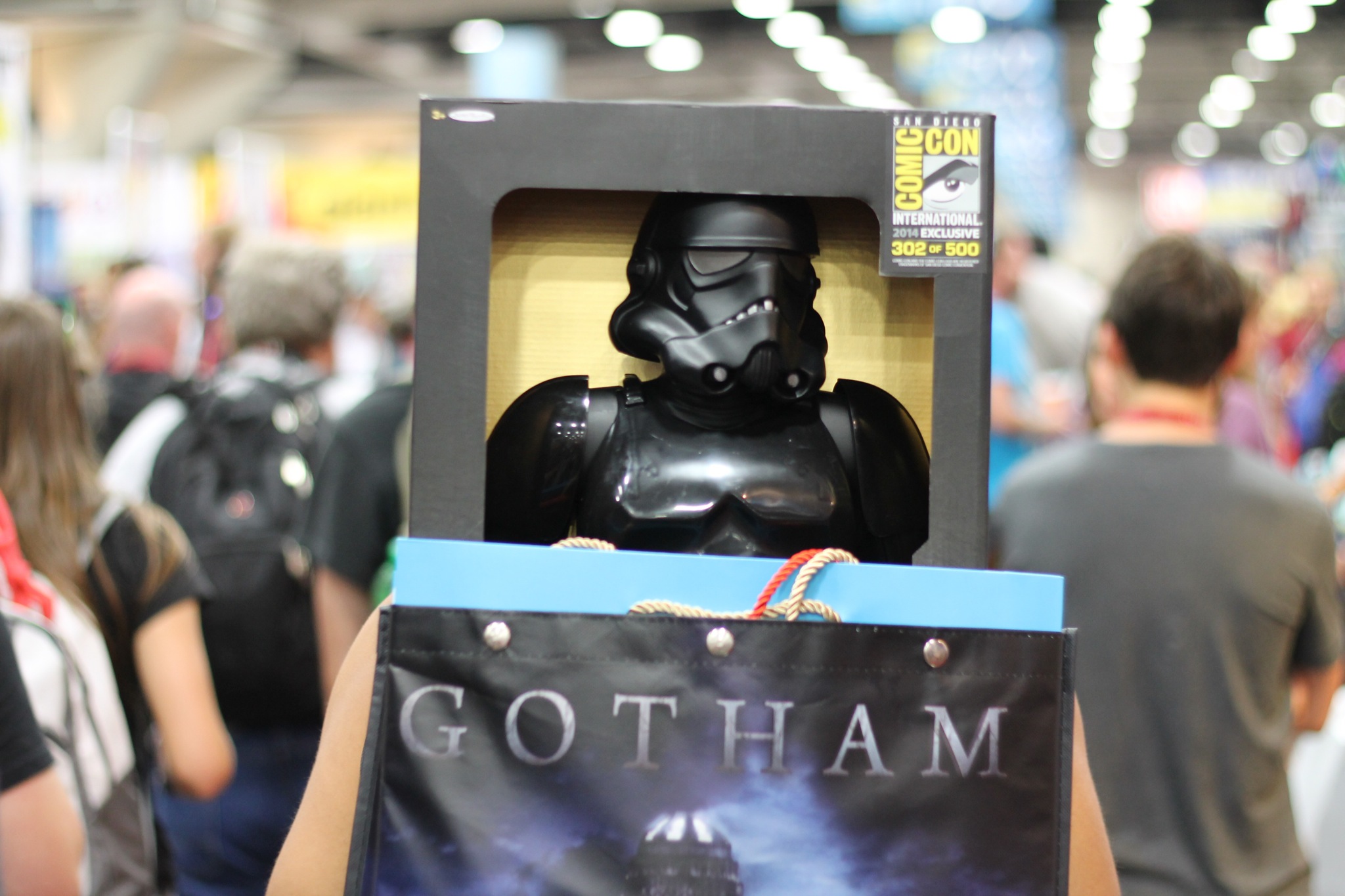 The Adult Swim booth, with a wheel for attendees to spin and obtain free stuff.  I waiting my turn and got a silly paper wallet. I was hoping to find out what Black Jesus could be. A lot of lucky peeps landed on Mike Tyson Mysteries, receiving a free doll figure. 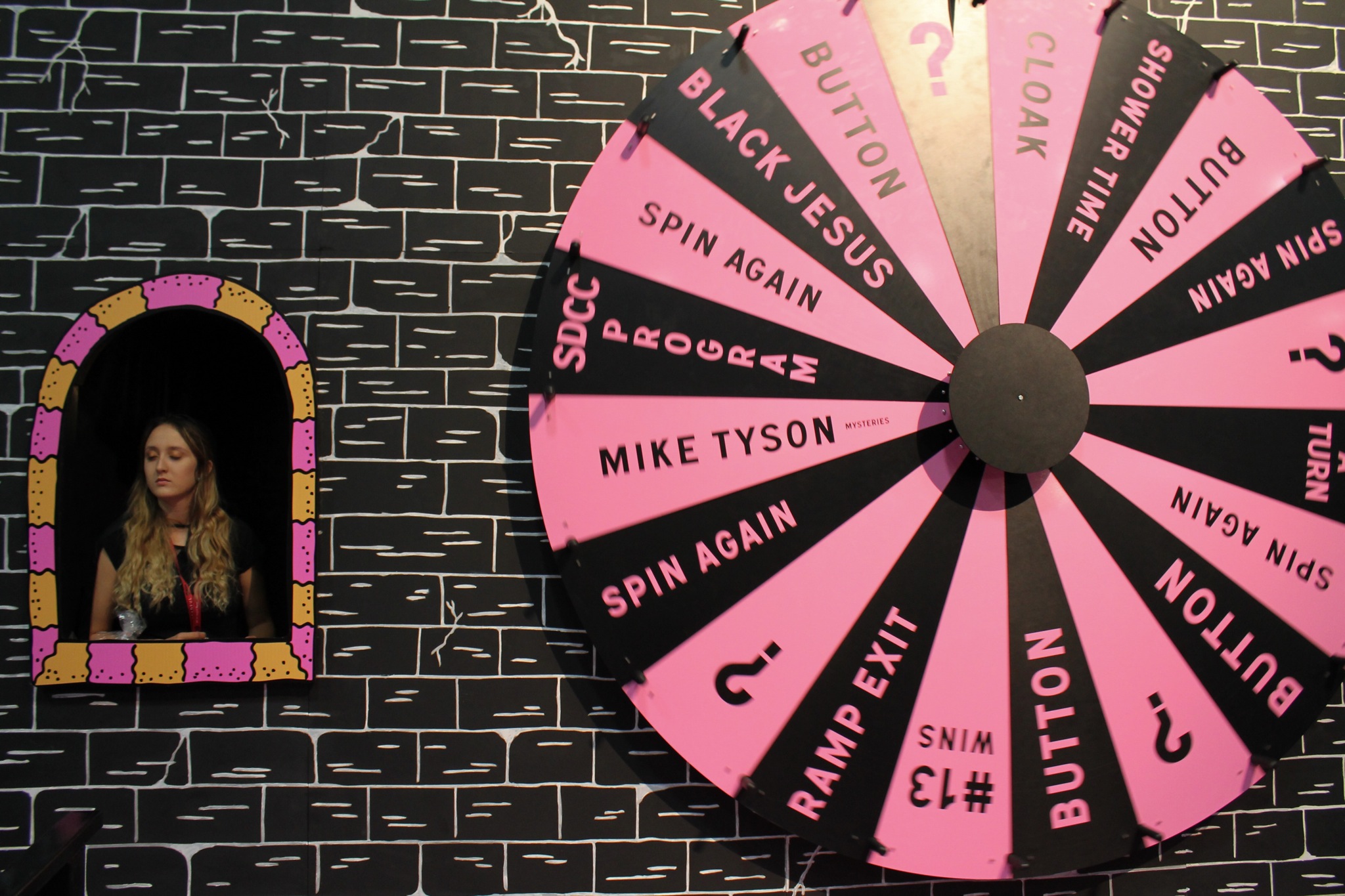 The Kotobukiya USA booth had to double their efforts, or deal with an unforgiving Emperor. 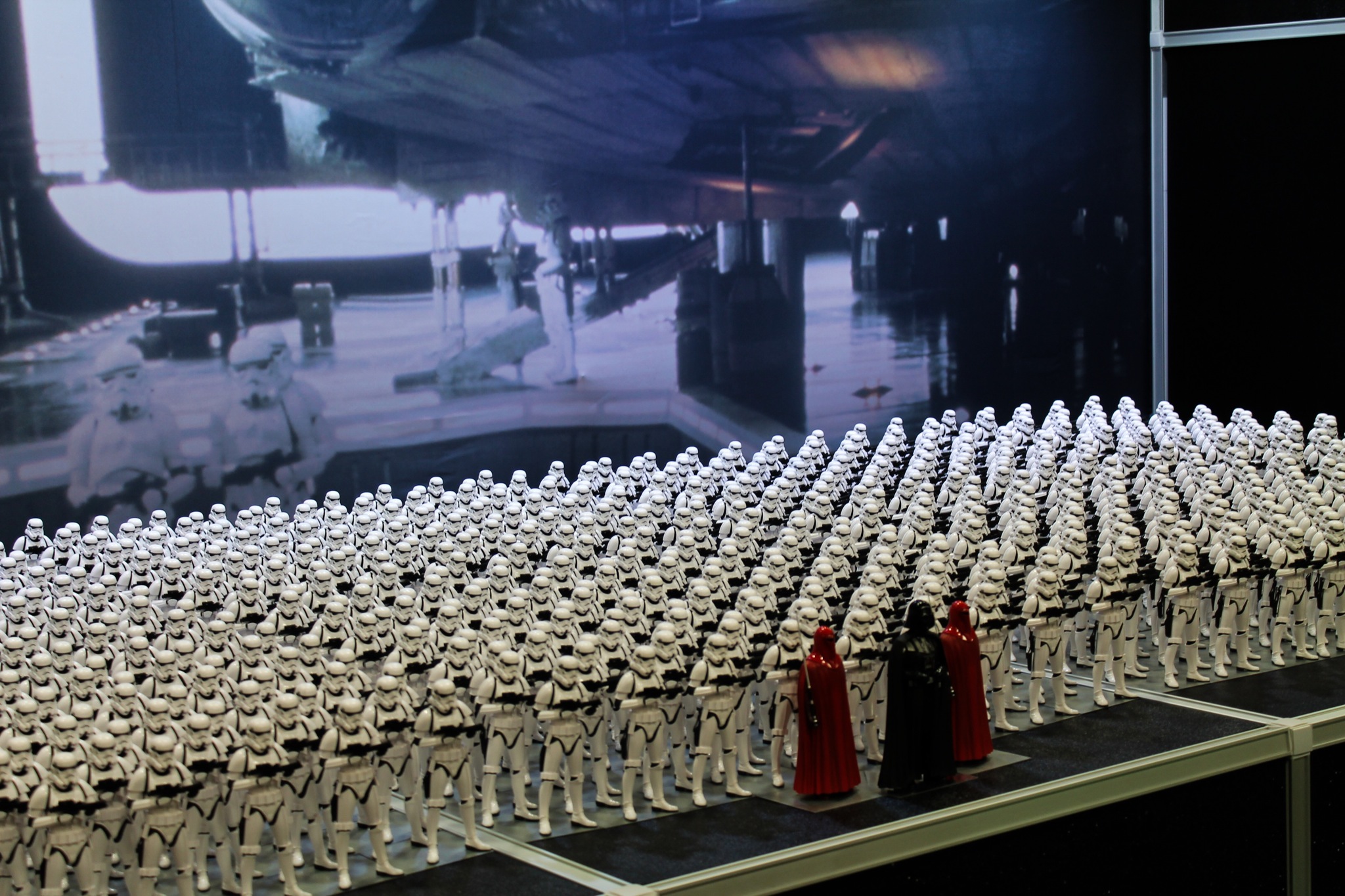 Kevin Eastman, co-creator of the Teenage Mutant Ninja Turtles signing at the Heavy Metal booth. He drew the first Ninja Turtle on paper, leading to Peter Laird to flesh out the creation to our familiar four. 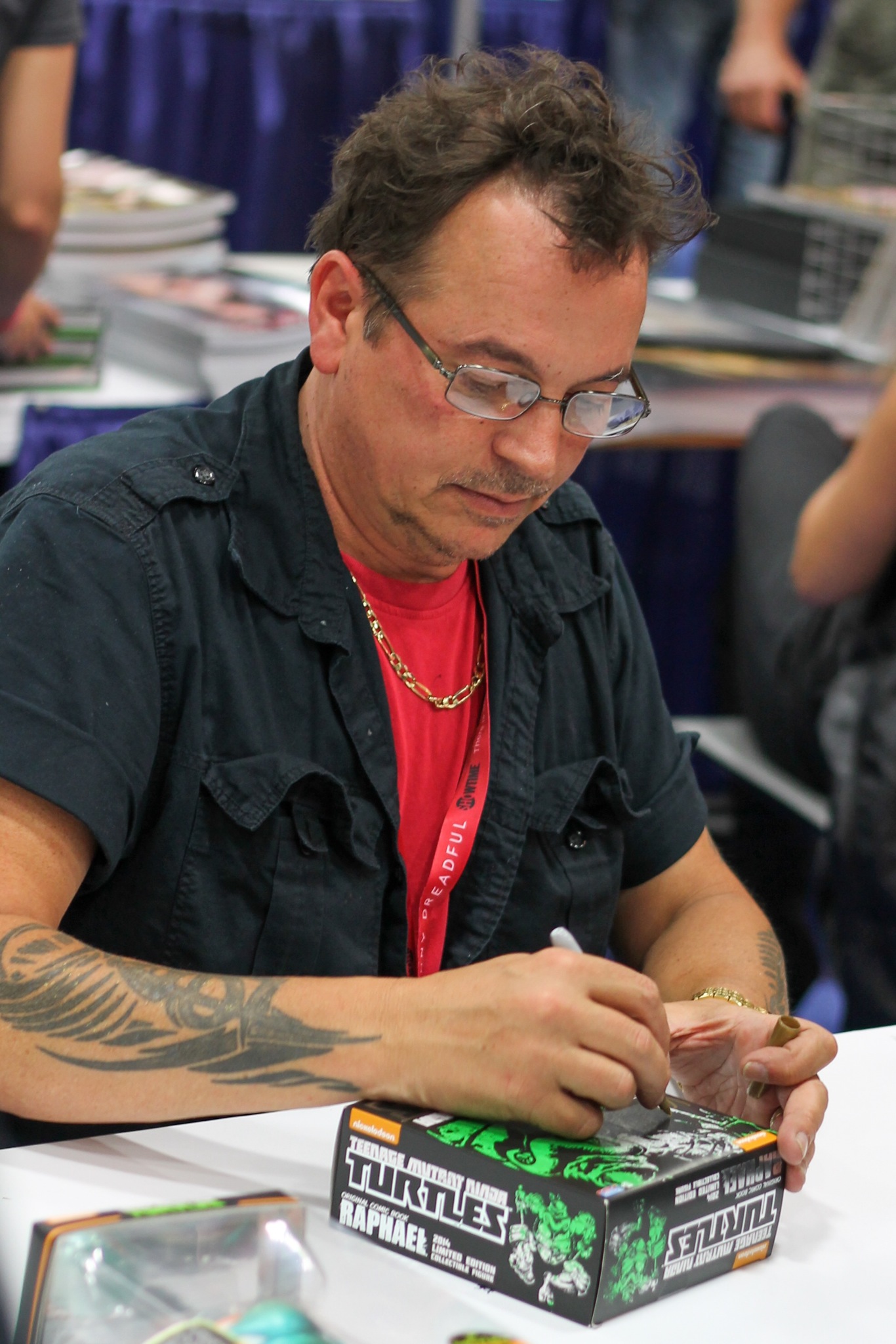 Over the recent years, trade paperbacks and graphic novels are often sold 50% off cover price by dealers. Many such bins have a somewhat organized stack of good reads with some surprise oddities. Some have my curiosity with obscure reprints, like this gem. 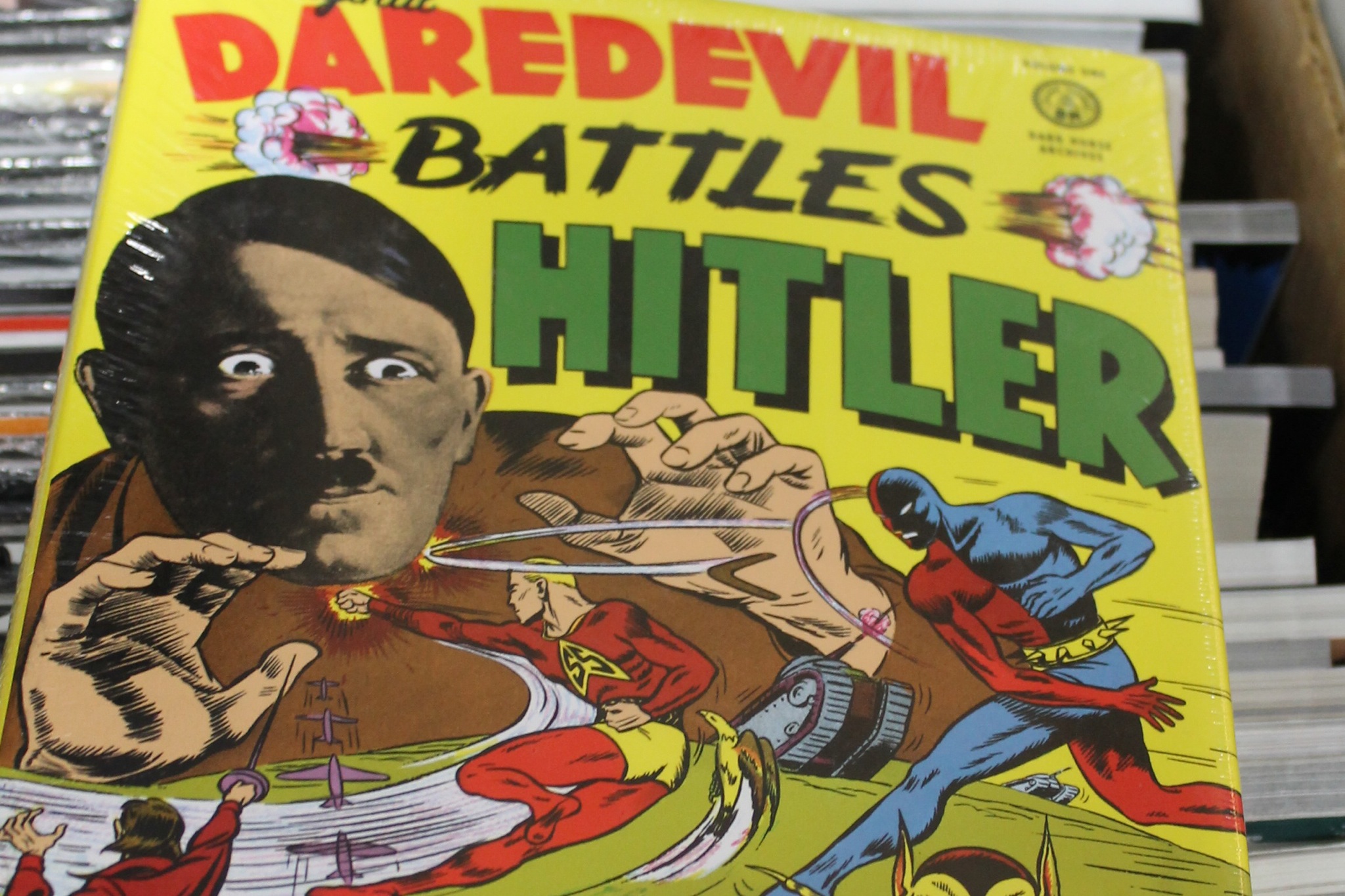 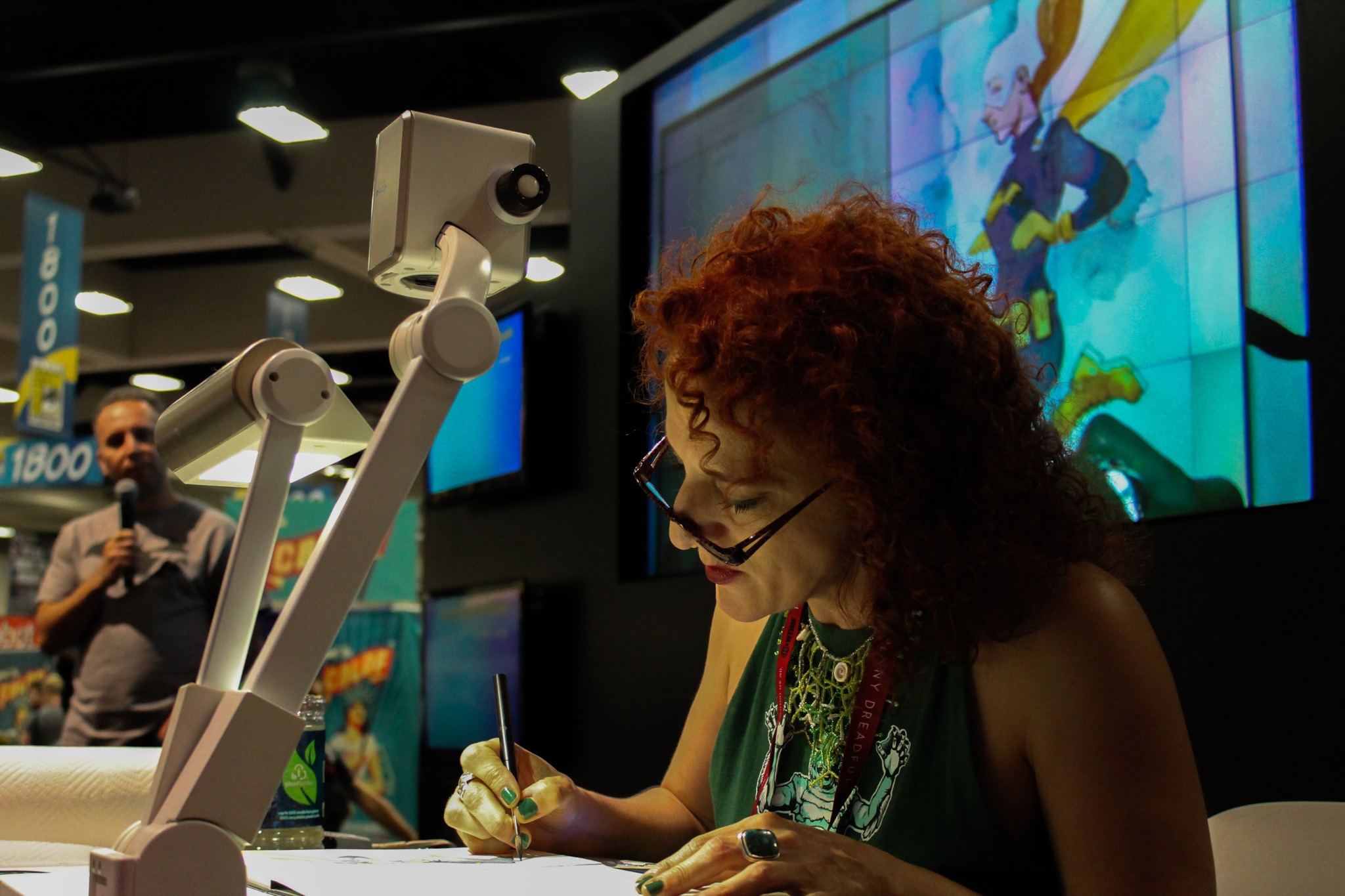 Another long-time artist, Arthur Adams. Currently doing wonders with Marvel again. Have you seen his cover work for the Original Sin crossover series? WOW, is that.

Nikola Scott and David Finch at the DC Booth, doing free sketches for fans. Sketches by artists at company booths were past a widespread thing at cons, a sort of norm and goal for attendees to fill their sketchbooks. Now, a tradition kept a live by just a few booths. 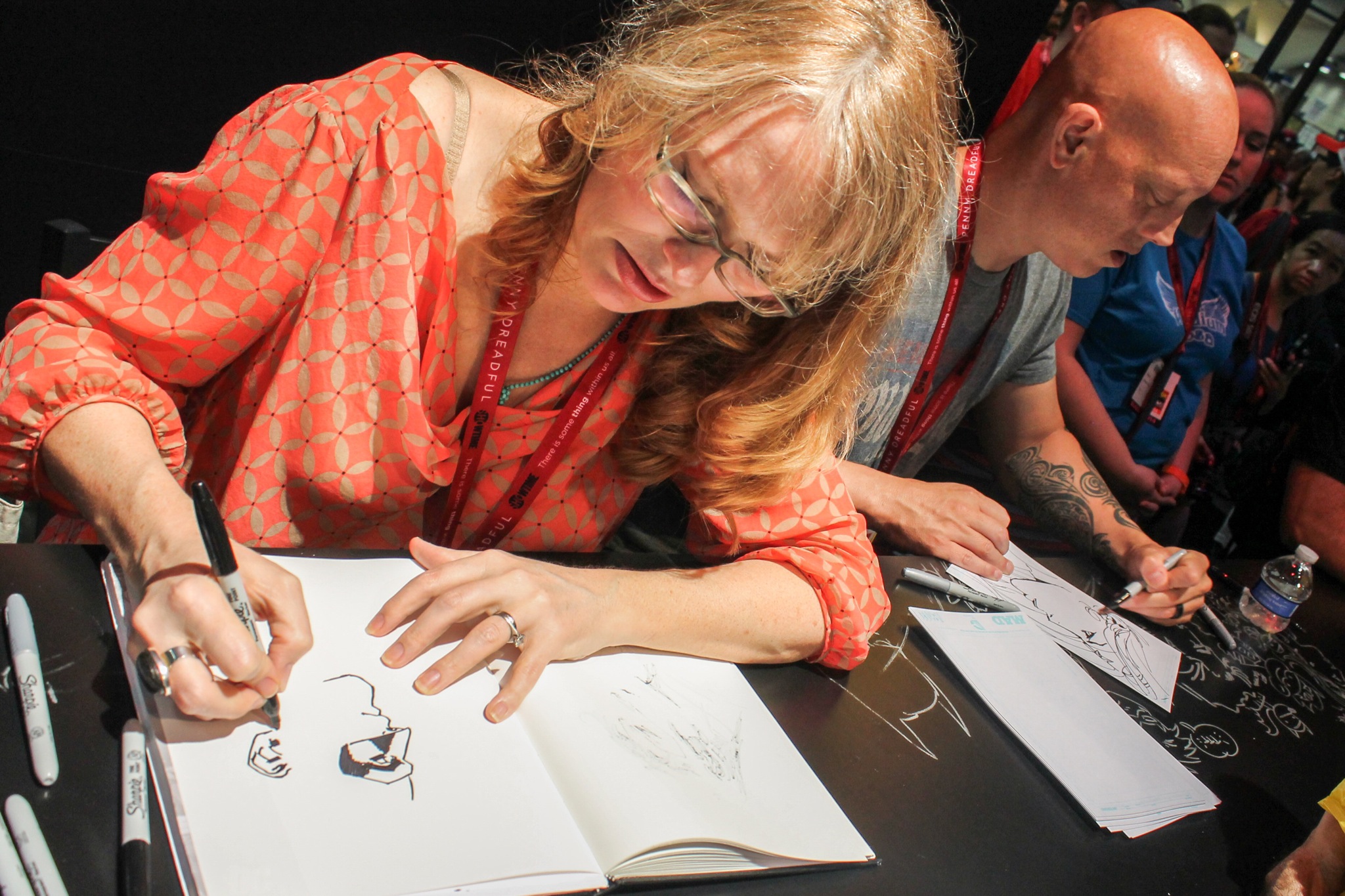 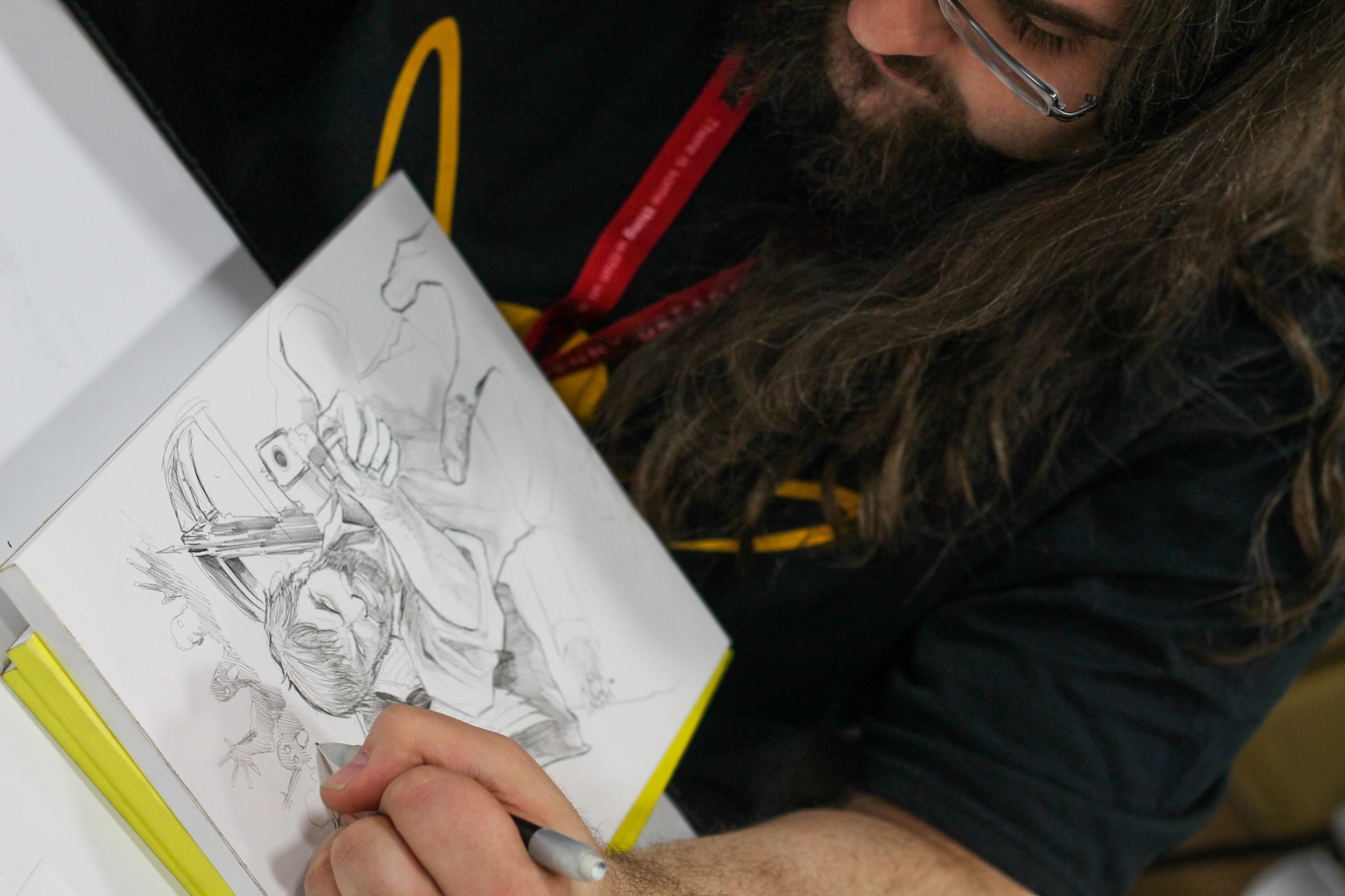 The Nickelodeon booth confounds us, with the craziest of booth designs. 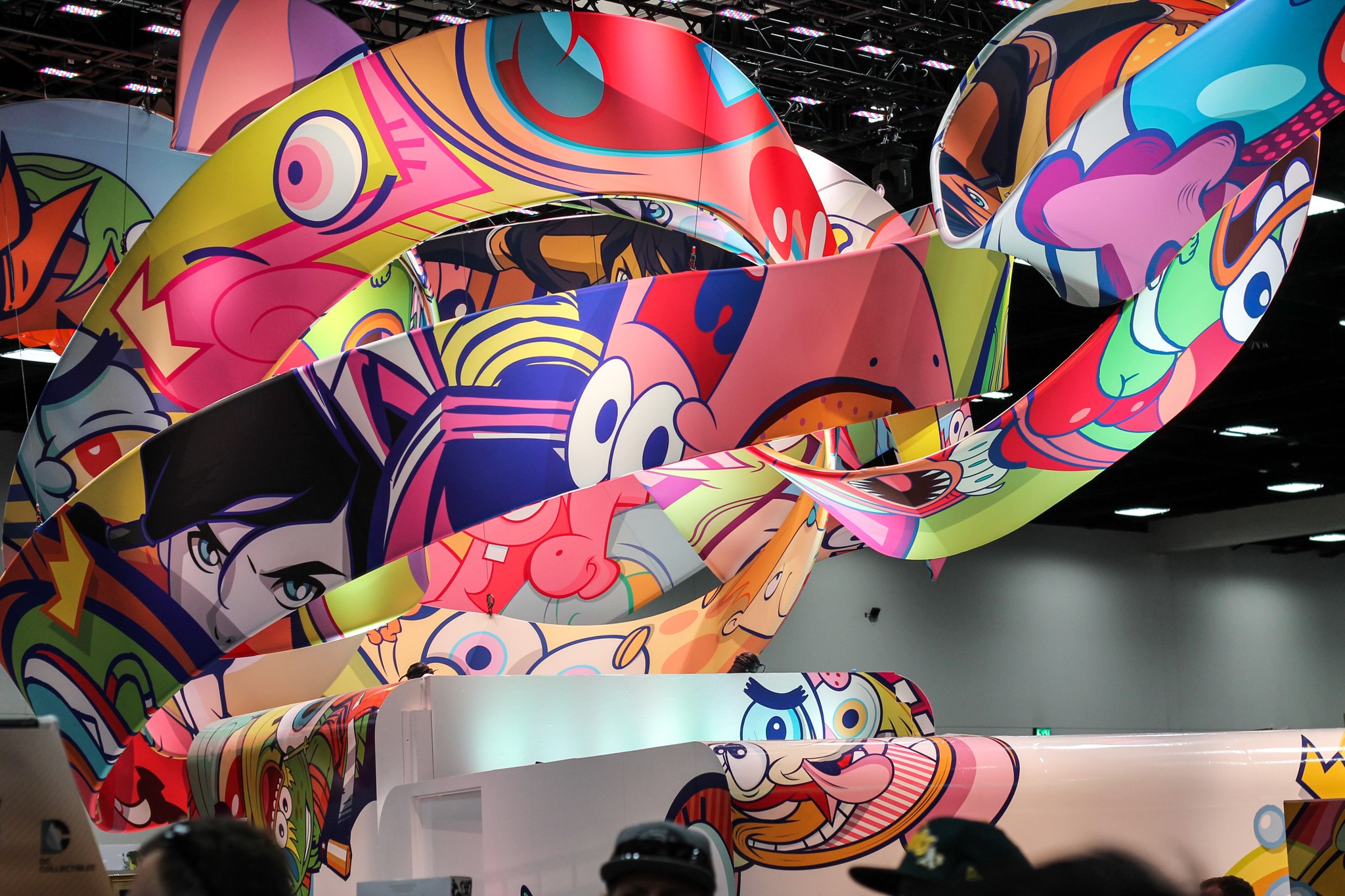 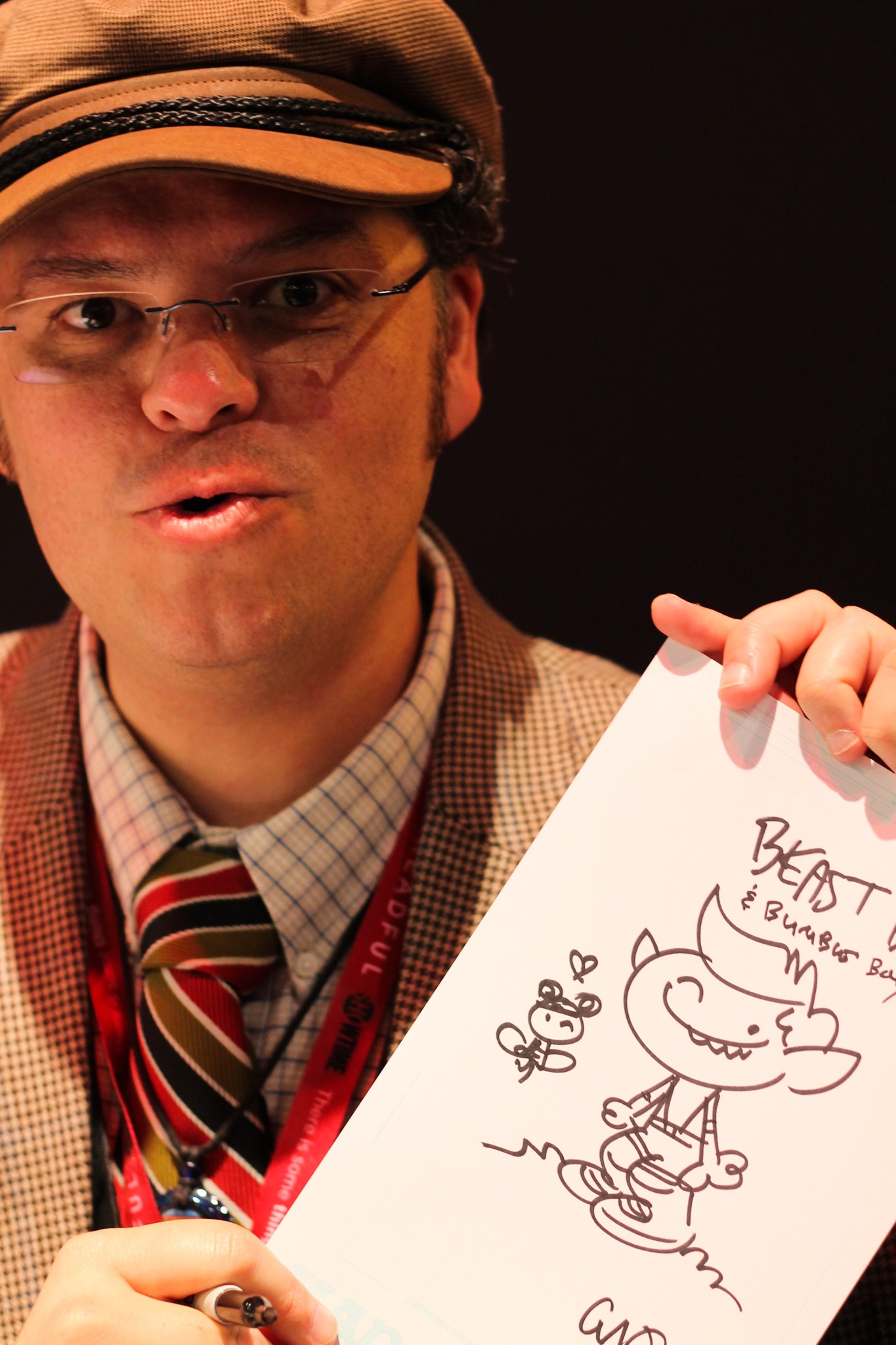 Marky Ramone (of The Ramones), promoting the Killogy comic he is now involved in. 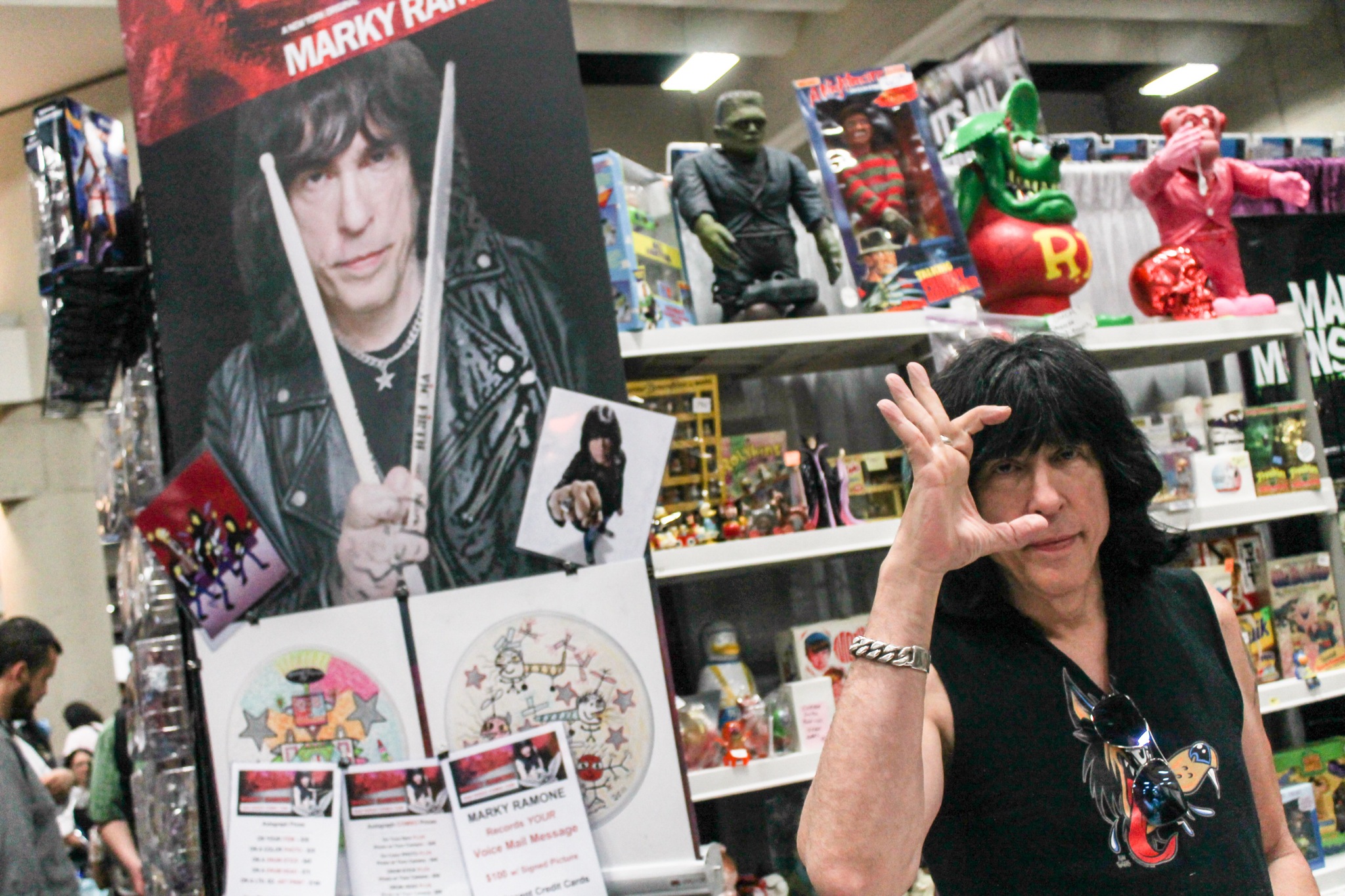 The Hasbro Exhibit booth shows us just how much they like playing with toys. 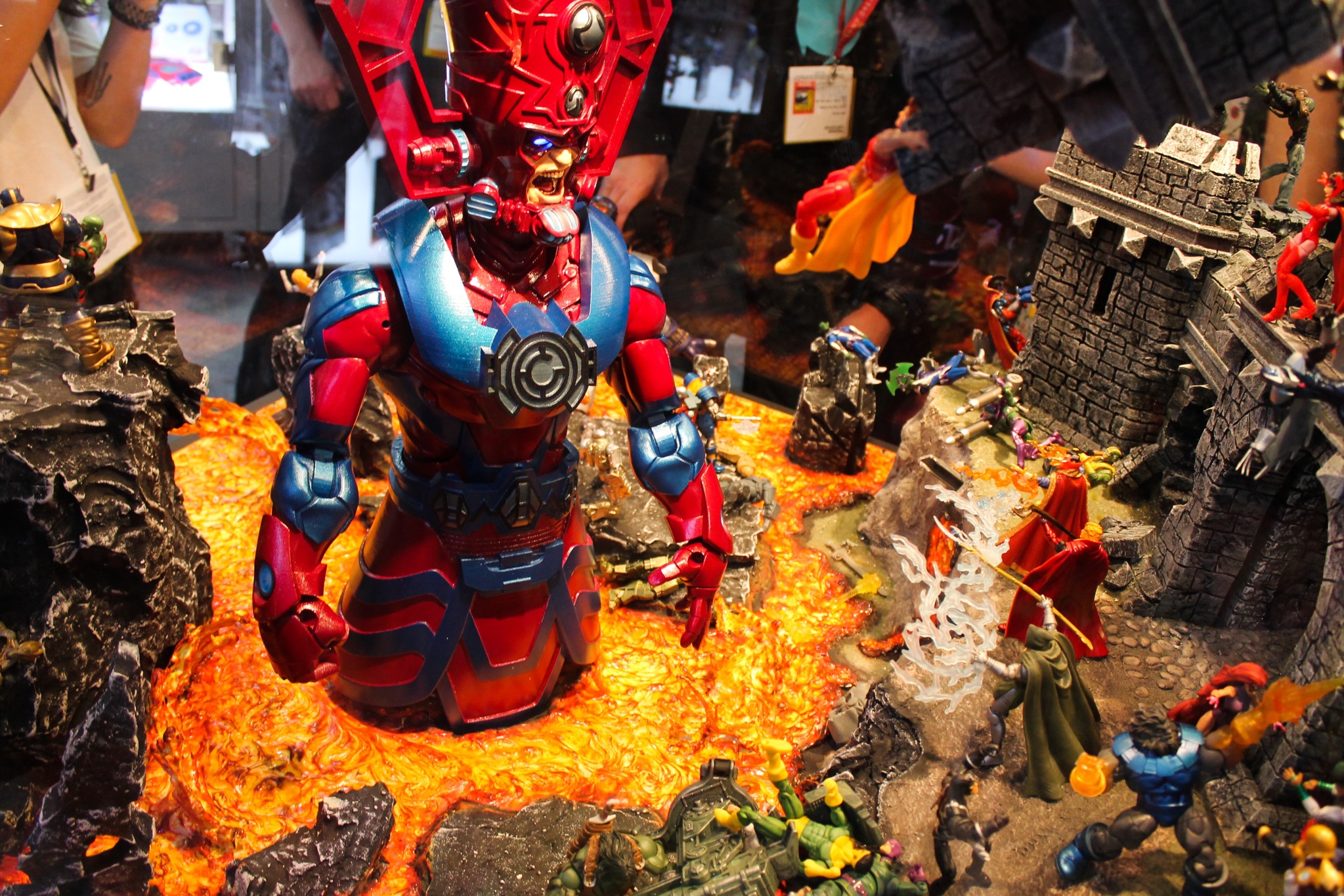 Dawn of makeupbysiryn.com, shows us some of that geek girl pride. 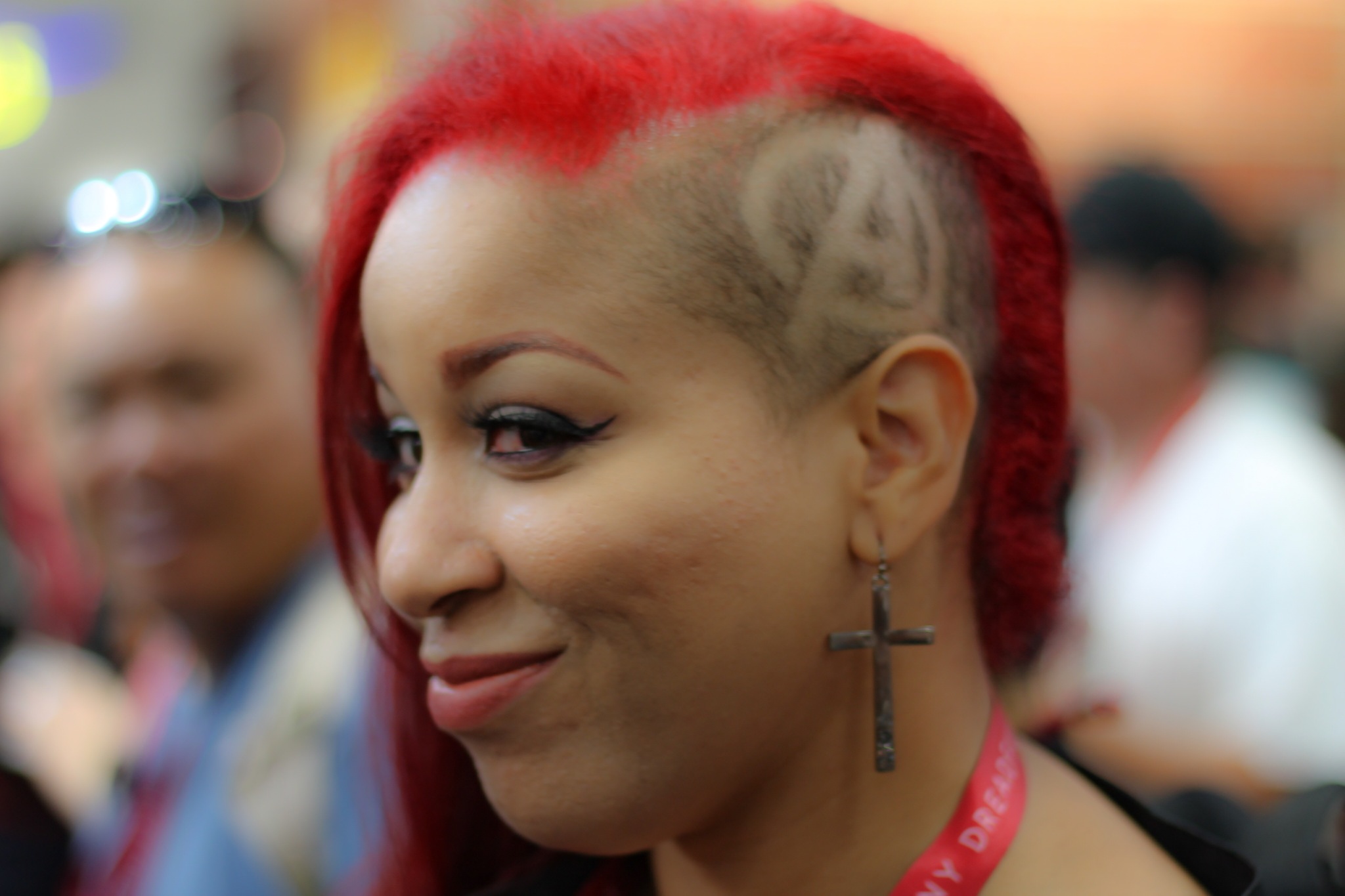 Apocalypse in full, often seen around the Marvel and Cinema Makeup School Booths. 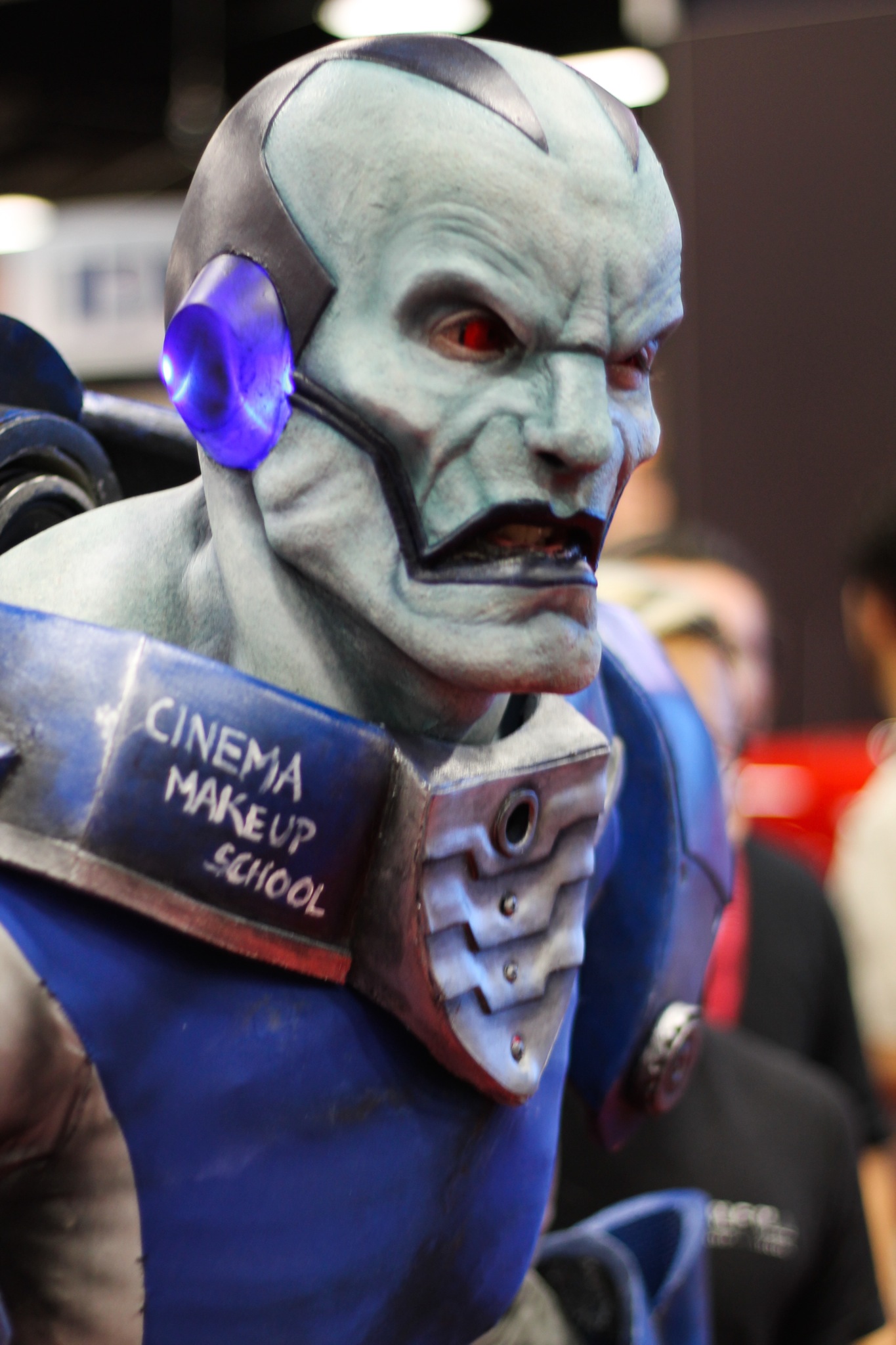 According to the Sanrio Company, “Hello Kitty speaks from her heart. She’s Sanrio’s ambassador to the world and isn’t bound to any particular language.” 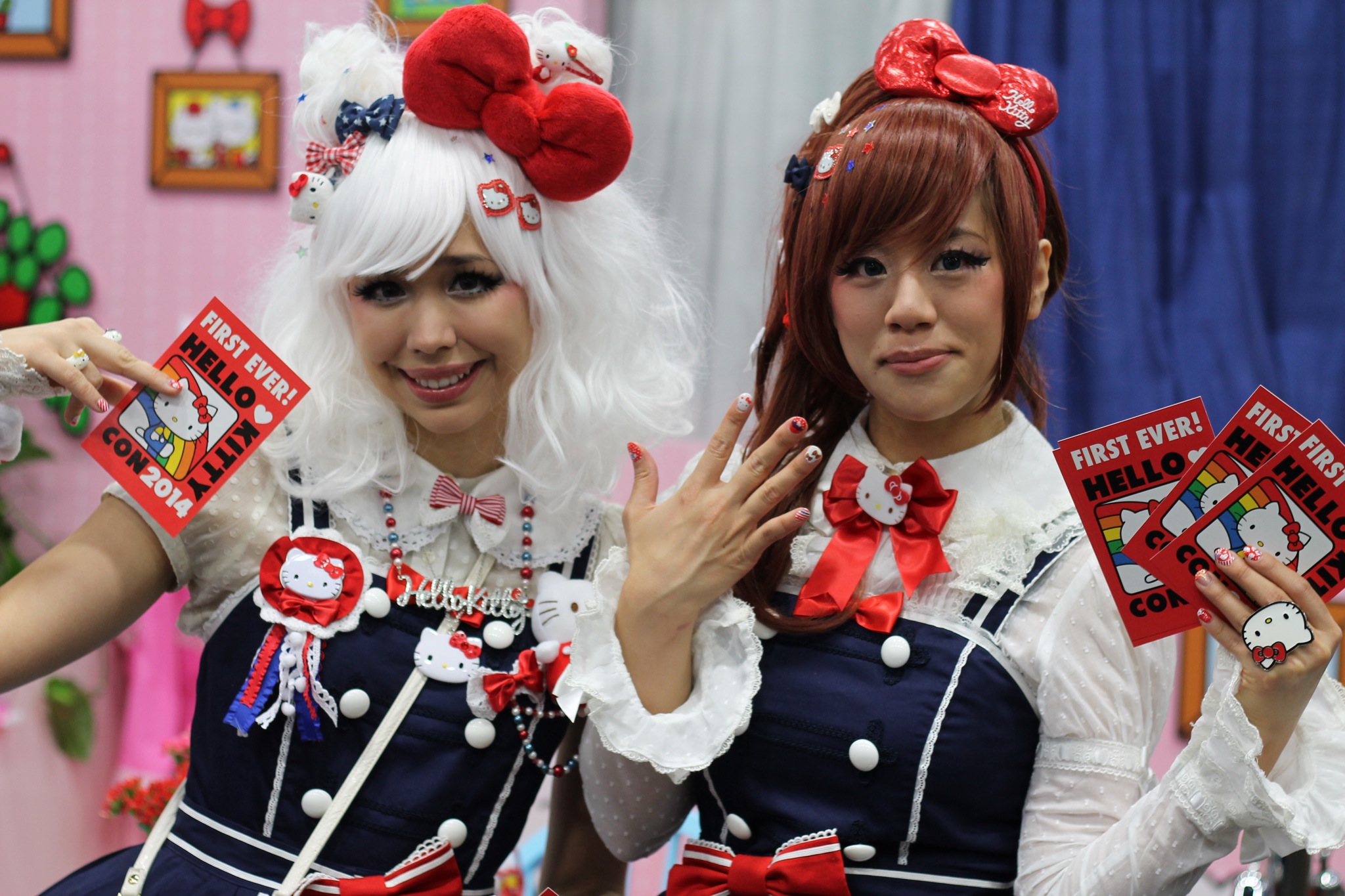 The Weta booth shows off some Smaug. 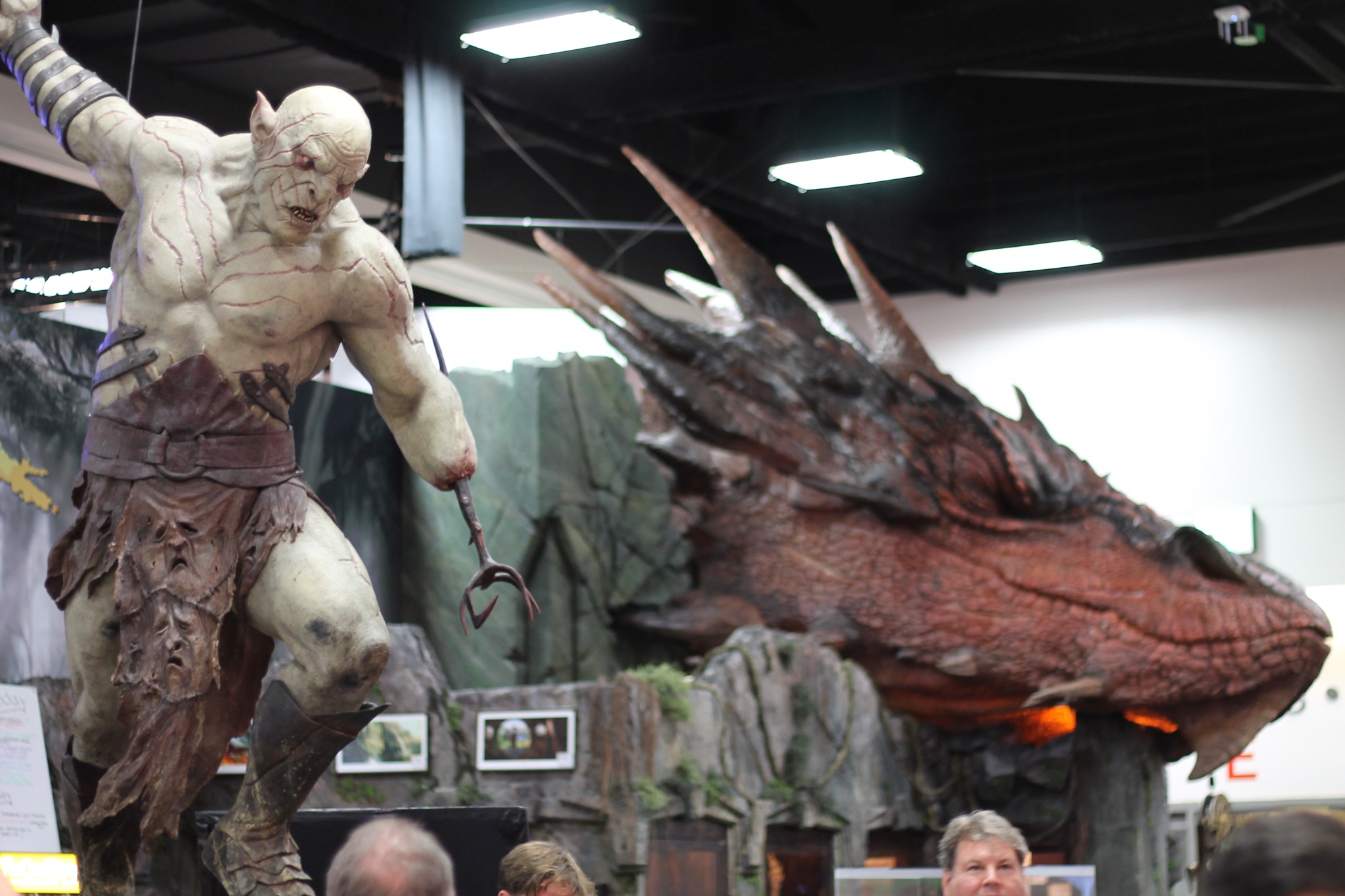 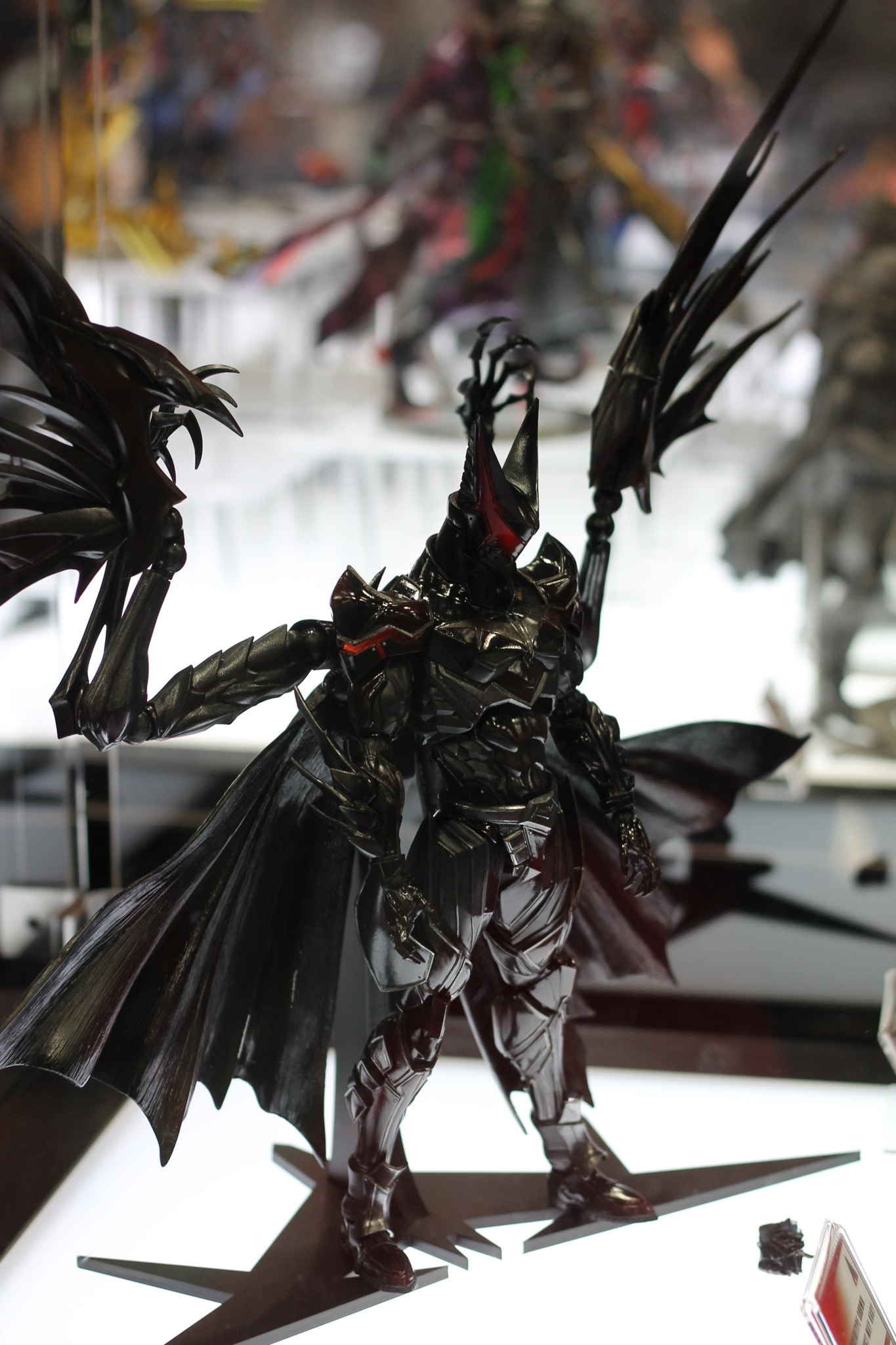 Some good collectible finds, deep in the heart of Exhibit Hall dealer territory,

Overall, another good adventure year on the Exhibit Hall. My advice, go where your heart takes you, but allow time for surprises and unplanned experiences. 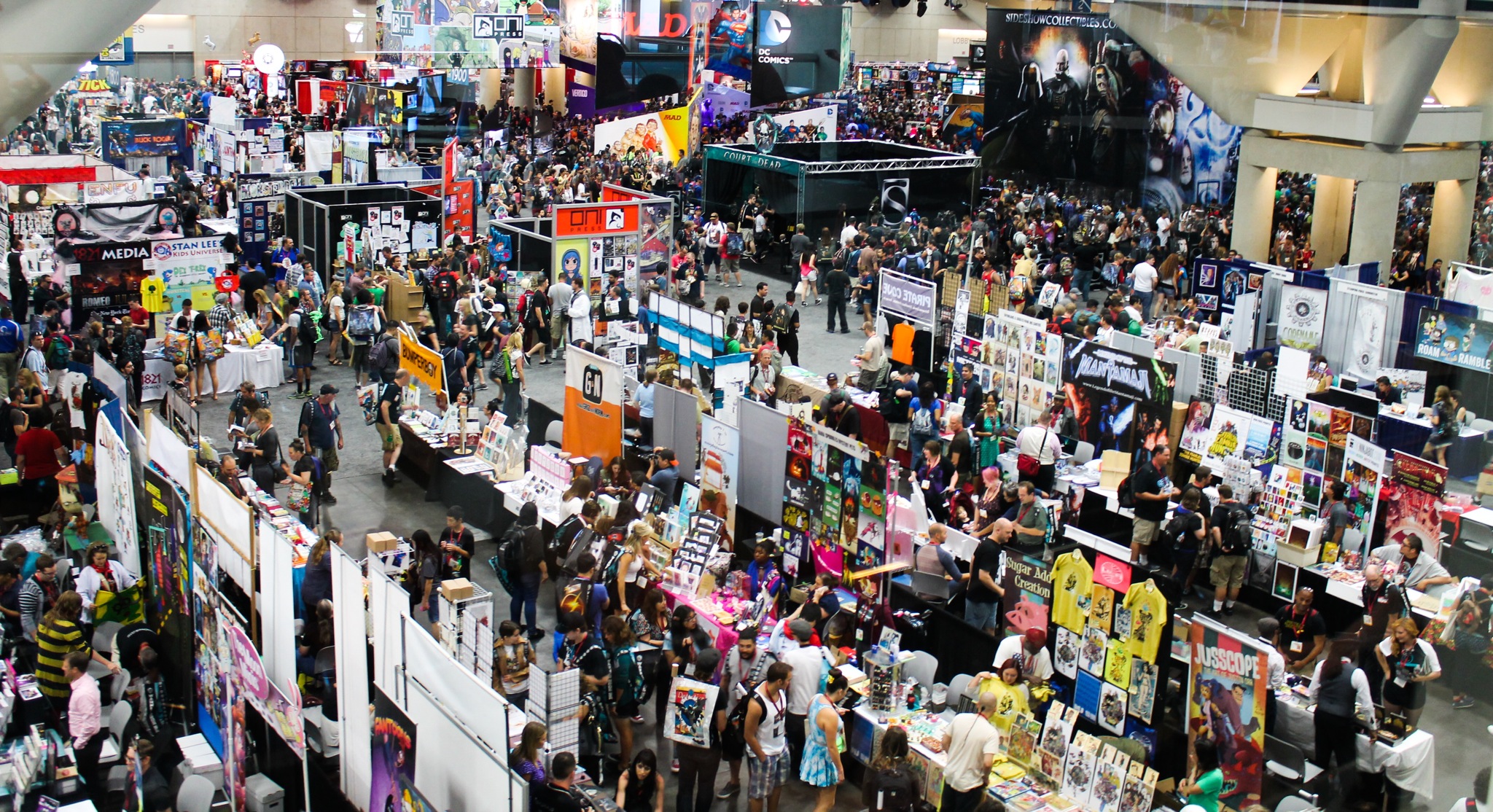