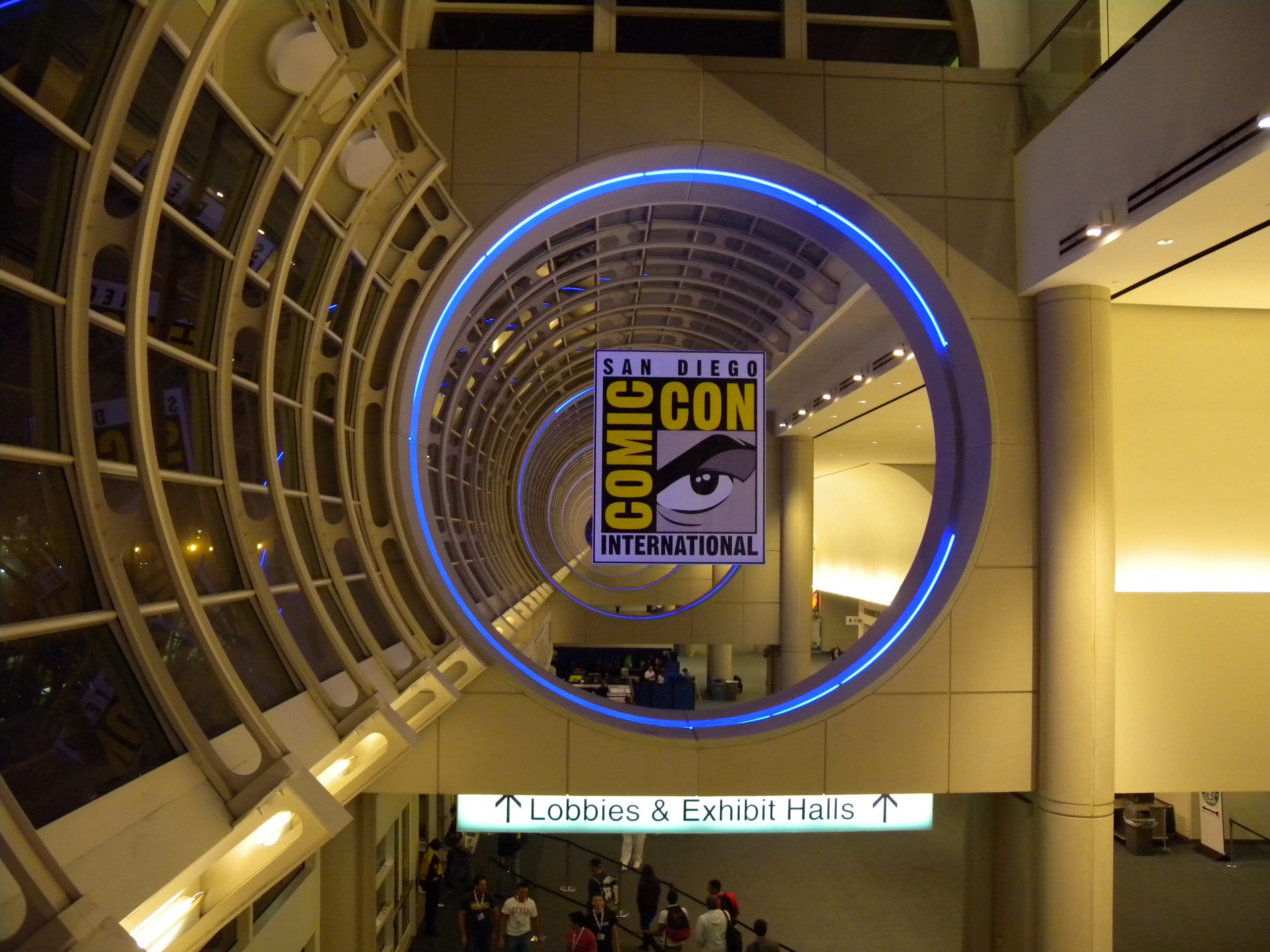 There’s a lot to be said about the many geek-themed conventions springing up around the country, but two of the most talked about are definitely San Diego Comic-Con and Dragon Con. I’ve been attending Dragon Con since 2012, while this year was my first SDCC experience…and though they are two entirely different conventions, I still want to compare and contrast them for anyone who might be questioning which would fit them best, or if they really want to try to attend both.

I will say this much: attending both in the same year is rough (because of cost, general preparation, and how exhausting conventions usually are). I learned this to my detriment just this summer, when I attended SDCC toward the end of July and followed it up with my usual Labor Day Weekend trek to Atlanta for Dragon Con. So kudos to those who do so on a consistent basis!

Because both San Diego Comic-Con and Dragon Con are large conventions, in most cases it takes a lot of planning to get to either of them. Whether it’s wringing your hands in SDCC’s virtual waiting room for badges or battling with Passkey for a coveted Marriott reservation, you’re looking at nearly a year of build-up before you even arrive at either of these events.

And that’s why that pre-convention period deserves its own comparison post.

Although I was lucky enough to be offered press passes for both SDCC and Dragon Con this year, I had friends who were attempting to get tickets to SDCC and therefore got to fully experience the badge process for that convention… though of course it wasn’t quite as nerve-wracking for me, as at least I knew that I already had a press pass for myself. 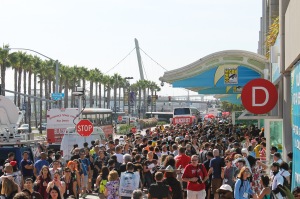 That said, I’ve purchased tickets for plenty of conventions, but they’ve all been conventions that sell tickets online right up to the event, and then sell tickets at the door as well – which Dragon Con does, at least for now (despite the ever-present argument that they should start capping ticket sales). The idea of sitting in an online ‘waiting room’ and hoping that I would get at least a single day ticket to Thursday or Sunday of Comic-Con is therefore still alien to me, though I did participate in attempting to help others do just that.

Now, if you had a ticket the previous year, you have a chance to pre-register, which is great for those people – but when badges go on sale to the general public, it’s basically a lottery. Several people I know weren’t able to get a badge for all four days, with of course Friday and Saturday selling out the fastest. Long, long gone are the days when you could buy an SDCC badge ‘at the door’, though as mentioned, it’s still possible to do so at Dragon Con.

Price-wise, though, these two conventions aren’t really comparable. Dragon Con is big but Comic-Con is bigger, much bigger, and the insider info you may get and the chance encounters you may have make the more expensive SDCC badge worth the extra cost…and even, I’ll admit, the extra hassle to get one.

One thing that many SDCC fans love to repeat is that there are plenty of themed events going on that make a badge unnecessary. Considering I barely stepped foot in the convention hall on Friday and Saturday of SDCC, I’m inclined to agree, though it’s important to note that most of those outside events can mean fighting for one of the limited tickets to a special panel, such as with NerdHQ, or waiting in long lines to participate in things like the Game of Thrones exhibit or the Vikings experience. Personally I wouldn’t attend Comic-Con weekend without at least scoring a badge for one day. 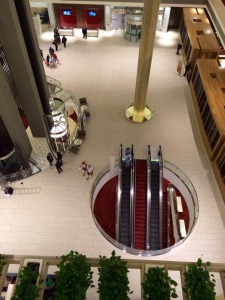 I can sum up the hotel booking process for Comic-Con and Dragon Con by saying that in this case, at least if you’re not trying to stay at, say, the Hard Rock or the Hilton, Comic-Con has a far superior system. You sign in at a specific time on a specific date several months before the convention and fill out a form choosing your top three hotels, along with several other options. They then book out the rooms in the order requests were received, and you have 48 hours from the receipt of your confirmation email to book the hotel they’ve assigned to you. However, I’ve heard stories of the hotel booking site crashing for other people, and of course if you don’t go through the process within minutes of booking going live you likely won’t get anything within several mils of the convention center. It’s still important to know what you’re getting into before assuming you’ll end up with a decent room.

I’ve gotten lucky with Dragon Con hotel rooms some years, and failed miserably others. If you don’t snag a room for the next year at the Hilton or the Westin the day or two after Dragon Con is over, you won’t be staying at either of those. The Hyatt and Marriott go live for bookings somewhat later, but the system they use – the aforementioned Passkey – has been nothing short of a nightmare every year that I’ve attempted to book a room at either of them. And it doesn’t help that even the hotels that aren’t host hotels book up at weird times that are nearly impossible to keep track of. Regardless, if you don’t have your own room by October of the year before you plan on attending, you may want to start tracking the [unofficial] Dragon Con room share social media outlets.

But I think it’s important to note that with as much as people complain about the booking system – and even with as much as Atlanta hotels hike up their rates for Dragon Con weekend – convention rates don’t climb into the $400+ range *per night* to stay in the immediate convention center area. What $200-ish per night gets you for a room at Dragon Con could even be at a host hotel, and if it’s not you’re staying no more than a block or two away. That same rate is lucky to get you a room less than a mile from the San Diego Convention Center, so if cost is a big factor to you, keep this in mind.

I’ll put this succinctly: In the case of revealing information about who is attending and putting out a schedule, San Diego Comic-Con will forever do what it wants and get away with that. Sure, I’m something of an overplanner, and this got on my nerves a bit – but I get it, and I’m not even arguing against it. This is simply one of those things that anyone who plans on attending Comic-Con should keep in mind – you’ll have plenty to do, but you won’t know what those things are until about a week before you’re there.

That does leave me open to do a bit of bragging about the amazing job Dragon Con does with keeping official information up to date, making guest announcements, and putting out a schedule. I will admit to being a bit sad that they seem to release the schedule later every year, but it’s still well before the convention…and they really do a great job with everything else, keeping up with their website and their extremely active Facebook page and Twitter.

This is another area in which Dragon Con excels. Most of the tracks have their own Facebook pages and/or groups, and a few use Twitter as well. The Dragon Con subreddit is extremely active, and there’s even a long-running Dragon Con group on LiveJournal! Not to mention the cosplay-specific groups that also help pass on official information along with scheduling their own ‘unofficial’ events…I could go on and on. Of course this causes a few minor issues – you may end up seeing the same announcements over and over, and if you join too many of these pages/groups/etc. you could just overwhelm yourself.

While there are a handful of fan-run SDCC Facebook pages and groups, the subreddit is sadly quiet and the chance to interact with other attendees before the convention is nowhere near as prolific as with Dragon Con. Thankfully the Friends of Comic-Con International message boards are full of information from other attendees, along with being well organized and the fact that the posters’ attitudes were, from what I saw, pleasant.

It’s pretty clear to me that Dragon Con excels in terms of pre-con communication, both officially and unofficially – of course, it is a fan-run convention, so this isn’t that big of a surprise. Still, although I think both conventions have room for improvement in other areas, in the end it’s really the experience that attendees have at a con that makes them want to go through all of this preparation over and over again…so keep an eye out for my next Comic-Con vs. Dragon Con article!