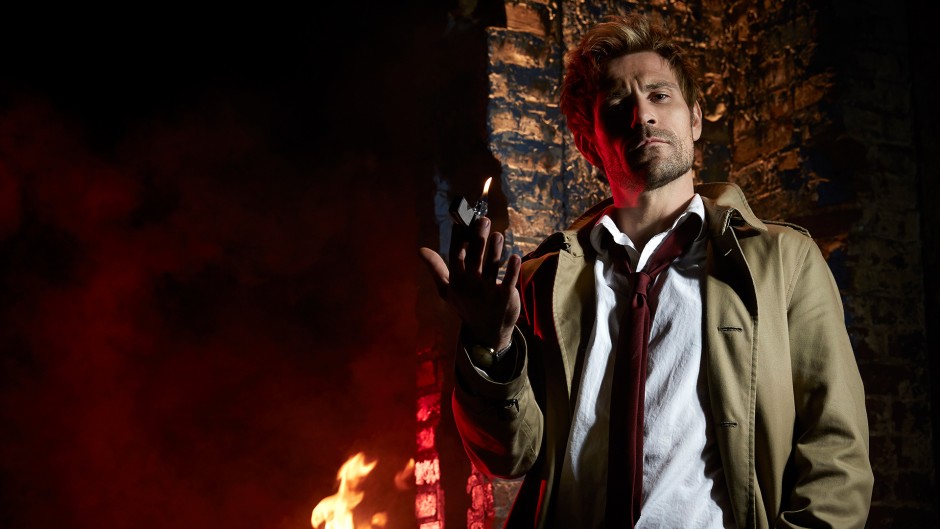 “If you wanted to see the comic book on screen, that’s happening Friday night,” Executive Producer David Goyer in a press conference on Thursday.  The fledgling show has had a rocky start, partially due to the switch out of the original character Liv with the comic character Zed and partially due to the somewhat repetitive feeling of the show in a genre that’s covered much the same ground already.  In my last Constantine review I expressed a hope that the fourth episode would be the one to put the show on the right track and correct the shaky first three episodes.  If Goyer and fellow Executive Producer Daniel Cerone’s confidence in the upcoming episode are accurate, my wish may come true.  “We’re pretty psyched,” Goyer said.

One of the frequent criticism’s of the show is the fact that many of the show’s elements are present in other shows already.  Last week we covered the legend of Robert Johnson, which was something that was a key component in the development of Supernatural‘s mythology many seasons ago.  The character Castiel is even dressed similarly to Constantine, which David Goyer is quick to point out was Supernatural modeling him on the Hellblazer character that came before it.

“What’s fundamentally different show about our show, versus ‘oh it’s a show about people hunting the supernatural’  is the John Constantine character.  He’s an amazing character.  With all due respect to those shows, he was around a lot longer and a lot earlier than they were.  I know there’s some people who say ‘oh there’s a character on ‘Supernatural’ that Constantine is like.’  That character was influenced by Constantine not the other way around and he’s been around for 25 or 30 years.  I think once people [have] a few more episodes under their belt, particularly the episode that’s going to air Friday night, [people will realize] it’s a very different show.” – David Goyer

“As a story teller you can’t pay attention to what other people are doing on similar shows.  I think that’s where you’ll get into trouble, frankly, because if it’s in your head ‘oh they did this creature or they did this scare or did this sort legend or mythology’ then you start comparing yourself.  We’re just trying to channel the character of John Constantine as pure as we can.” -Daniel Cerone

In fact, they went on to talk about some other urban myths they plan on covering a few episodes from now.  They have a “thematic” urban myth episode in store that’ll reference three popular ghost stories.  Legends that’ll be included will be a popular phantom hitchhiker, the Japanese slit mouthed woman, and the golden hand legends.  All of the stories will tie back into Papa Midnite as well as the rising darkness theme that was introduced in the pilot episode, so despite them being common myths it seems it’ll be a unique take on them and bring it back around to the ongoing arc of the season.  The imbalance between straight comic book material and well known urban legends seems to be something they are aware of and will be attempting to blend together moving forward.

This week’s episode sounds like it’s going to be lifted directly from the comics, though.  For fans of the original Hellblazer series who have been hoping to see the comics they know and love it sounds like that’s exactly what’s in store this Friday.

“We’re digging as deeply into the Constantine mythos as we possibly can.  In fact, it really is inspiring much of our story telling. The episode that is airing this Friday that we’re extremely excited about, ‘A Feast of Friends,’ [is] a story that is literally ripped from the pages of Hellblazer.  It’s the first story of the first issue.” -Daniel Cerone

I have high hopes for this show and from the sound of it, it seems that they’ll be striking a good balance with their story telling soon.  It’s been a rough start as this show finds its feet, but now that we’ve gotten over the transition between characters it looks like things will be evening out.  I look forward to the next few episodes as this show finds its rhythm.

1 thought on “‘Constantine’ to Draw from Source Material and Urban Myths, Says Producers”