Dear Geekiary: Why is Vixen an Animated Series?

Dear Geekiary, CW will be airing Vixen animated series on CW Seed set in same universe as Arrow and Flash this fall. What are your thoughts about that? A POC female lead show, but not good enough for a live-action series? Supergirl’s getting her own live action series so why not give one to Vixen too? Not like we have a saturation of POC females on our TV screens.

Thank you for your question! I agree. An animated TV show with a POC female lead does sort of feel like only a half-step in the right direction. I do think it’s great that we are starting to get more female lead shows in the super hero genre. Females and people of color in general sadly lack in the comics that tend to make it onto our TV and movie screens, especially in the main character capacity. From my understanding, show runner Marc Guggenheim, is excited to work in the animated genre and is hoping Vixen will appeal to people who don’t normally watch animated TV shows. His goal is to stay as close to the comic as possible and the animated medium will allow him to do so. 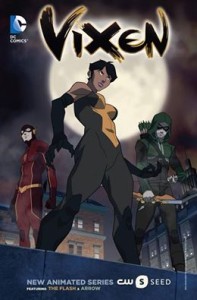 I’m not sure of the CW’s reasoning. Maybe they really do believe that a network that has 60% women and 40% men viewership would not be interested in a live action Vixen TV show, which is skewed logic as far as I’m concerned. The past has already proven the opposite. People loved Buffy the Vampire Slayer and Agent Carter is turning out to be a hit with the fans. Maybe the CW is hoping to bring more interest to CW Seed. Maybe they’re even curious to see what kind of ratings Agent Carter gets. Regardless, Guggenheim would be more than thrilled if interest was high in the show and would love for the CW to ask him to make it a live action series.

I like the idea of characters from Arrow and The Flash crossing into Vixen. That’s not normally what we see when we think of crossovers. In the same vein, keep in mind that they’d be crossing over mediums from live action to animated series. If they plan to do that, I don’t see why Vixen can’t cross over into live action as well. I think the best thing any of us can do is continue to show interest in and support female and POC lead TV shows. We should show our excitement and support in a vocal way. Eventually we will break through to those in the entertainment industry. The times are changing and those involved in show business will have to change with us, or get left behind. I hope Vixen is a success for CW Seed and that I will next hear from you when Vixen is a live action TV show!