In the outwardly expanding cast of Steven Universe, Connie Maheswaran’s father has been seen and heard, but never gotten a whole episode all to himself. “Doug Out” rectifies that, and ends up being a delightful slice-of-life prequel to what promises to be a thrilling arc overall.

“Doug Out” wasn’t all silly pseudonyms and flashlight hijinks. Underscoring the fun was a deep, impending sense of dread. “Maybe we should get our weapons,” Connie says to Steven, moments before they are trapped inside the spinning Hyper Space ride. And it remains unclear, at the end, if the destruction of Funland and tormenting of Steven et al was partly or even a little bit Onion, or if those Mysterious Silhouettes were to blame for it all. They did seem to be chasing Onion specifically — but why? 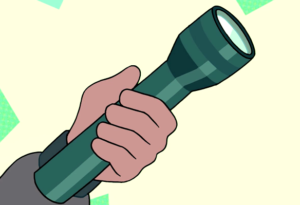 Despite that tantalizing cliffhanger, “Doug Out” was still majority low-pressure entertainment. At the risk of sounding like a broken record, Steven is human, too, and if Mysterious Silhouettes are indeed portents of dire plot to come, then thank goodness Steven gets an 11-minute breather with his best bud and her whacky papa. “Life can get really intense, huh?” Steven asks Connie over a bag of frybits at the start of the episode. They recap some of that intensity which Steven has experienced recently — the Gregnapping, the zoo, the Diamonds — and then they giggle about it, because they are kids on a boardwalk, enjoying each others’ company on a peaceful day.

True to form, Steven Universe doesn’t explore the aftermath of Connie’s confession that she is a swordfighting honorary member of an intergalactic group of alien rebels in a linear fashion. Instead, we know her parents are accepting of Connie’s new lifestyle because Mr. Maheswaran refers to her as “swashbuckling swashbuckler.” Plus, Doug is eager to protect the citizens of Beach City, “just like” Connie and Steven do with the Gems.

There are moments in “Doug Out” where Mr. Maheswaran clearly feels his own life is boring compared to Connie’s, but Steven and Connie are eager to participate in Doug’s stake out and let him know several times they think he and his occupation are cool. Steven even wistfully admits that he wishes there were more moments of waiting and watching in his life, but after all, he “kind of inherited an intergalactic war.” Still, the end of the episode sees Doug confessing out loud that he feels inferior. Not just to Connie and her saving-the-world heroics, but to his wife, a big shot surgeon who saves lives on the daily. Compared to them, what’s a silly old security guard dad supposed to do? 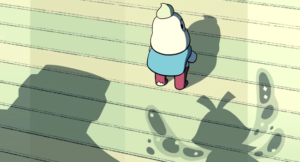 The answer, to Connie at least, is to embrace being silly. She appreciates it, just like Steven appreciates the peaceful moments in between fighting. Of course Steven Universe is no stranger to vulnerability, but it’s always delightful to get new flavors to play with, to secretly teach kids to be better adults. Doug’s parental and masculine vulnerability is acknowledged and dealt with in such a way that his feelings were neither undermined nor allowed to fester.
Now the peaceful moments of “Doug Out” seem like they might be behind us, and those Mysterious Silhouettes are sure to return.