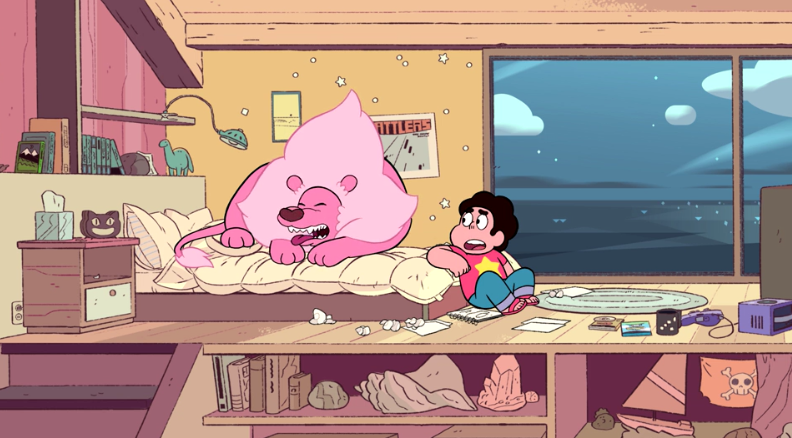 In a world… where superheroes are ladies and ladies are aliens and aliens are rocks, one half-human boy and his magical pet lion must uncover the secret his mother has been hiding from him… coming in Spring 2017, it’s “Lion 4: Alternate Ending.”

Every Lion episode has something to do with Rose Quartz, and “Lion 4: Alternate Ending” is no exception. Steven begs Lion to take him to the place the coughed-up pink key unlocks. It’s not the trunk in Lion’s mane, it’s not Rose’s fountain, nor her secret armory, but the travels to each place wove a wonderful musical montage of callbacks to their themes. The secret is not even in Steven himself, at least not literally. It’s in the desert, where Lion was found, and possibly made. It lies between a pre-rebellion looking set of doors, nestled between a buried pink structure that looks an awful lot like a Diamond ship… 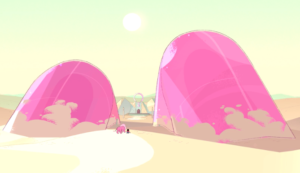 The secret is Rose’s trash, at least from Steven’s perspective. “This is just a bunch of garbage mom left behind!” says Steven, talking about the place, and totally not himself. He finds a VHS tape for a mysterious figure named Nora, and brings it to his dad. Nora would have been Steven’s name if he had been a girl, and the tape is a mirror of the one Rose did leave him in Lion’s mane.

“Garnet… Amethyst… Pearl… I know they expect something big from me…” It’s true. Or perhaps it was true. All three of the Gems’ relationships with Steven have improved by leaps and bounds, as they have come to accept Steven as his own person. But what Steven is missing here is that he has already accomplished great things. He rescued Lapis from the mirror. He taught Peridot the Crystal Gem ideals of freedom and equality. He rescued the planet from the Cluster, and gave the Cluster peace among themselves. He went on a slapdash mission to space and stole his father back from under the Diamonds’ very large noses.

But even more important: he didn’t have to do any of those things to have value as a person.

This episode begins with Steven as a conspiracy theorist, poring over the single direct message his mother left him, looking for clues, however unlikely, to shed light on his purpose, his reason for being. Before the arc at the end of season 3, I was a staunch supporter of the Rose Quartz = Pink Diamond theory. At the bottom of it all, I was convinced, Steven had to be somebody, somebody important, and that meant his mom had to be somebody important, too. What narrative purpose did it serve to make her some random Quartz soldier, even one who shattered her goddess-like overlord? 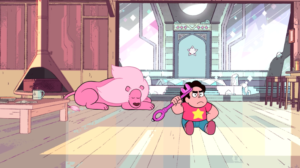 In a way, that is an “alternate ending” to the one we spent seasons expecting. No matter that he might end up saving Earth and toppling the Diamonds; that still doesn’t mean Steven has a predetermined magical destiny. Steven gets to choose to be that person, which is ultimately what his mother wanted for him.

Steven, of course, is not just half-Gem, he’s half-human, too. And his parental human half has always accepted and supported that, in a way the Gems simply couldn’t. He hugs Steven and tells him that no matter what Steven decides to do, Greg will support him. Steven has needed this reassurance for so long. The obvious relief he felt was enough to bring actual tears to my eyes. We should all be so lucky to have parental figures like Greg, Rose, and the Gems. 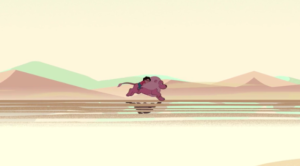