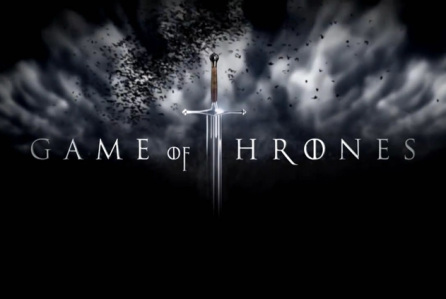 We’re now halfway through Game of Thrones season five, but I’m still nearly as lost as I was when all I had to go on were the pre-season trailers. Anyone else in the same boat? Perhaps a boat that’s sailing through Valyria while greyscale spreads over your skin?

Okay, rhetorical/sarcastic questions aside…Cersei started the season out pretty miserable, but quickly rectified that by aligning herself with the High Sparrow. Considering how she so recently scoffed at Lancel’s newfound religious obsession, it was a bit surprising that she not only armed the Faith but also allowed them to go raid what seemed to be every brothel and winesink in King’s Landing…and to capture Loras Tyrell, too! What I’m confused about is whether this means that Loras will essentially be taking Margaery’s place in Cersei’s little war against the Tyrells…and if so, what does that mean for Cersei’s walk of penance? I’d love to hear some thoughts on this!

Speaking of Lannisters, we’ve caught some glimpses of Jaime in Dorne, but so far not much of consequence has happened there. However, with the next episode being titled “Unbowed, Unbent, Unbroken”, I hope that at least some things will come to a head. I’m still a bit confused as to why Ellaria Sand has to be so hell-bent on revenge that she’s willing to kill an innocent girl (Myrcella, of course), but I’ve got my fingers crossed that the show won’t take things quite that far.

(Then again, this is Game of Thrones we’re talking about.)

One of the things I mentioned in Round 1 was that the trailers showed Hardhome, but unfortunately we haven’t seen it yet – and apparently won’t see it until episode eight. That said, in this week’s “Kill the Boy” we at least learned why Jon would end up at Hardhome in the first place. My main concern there is that we’ll just end up facing another Craster’s Keep – that Jon going to Hardhome is simply a way to keep him in the action, and that nothing truly important will come of it…which will render it yet another unnecessary (and perhaps downright ridiculous) change from what happens in the novels. 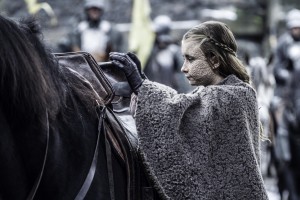 They do make some decent changes from time to time, though, and I have to say that I think Stannis is one of them. He’s still that iron-willed man we know and love from the books, but the show has given him some character development that’s made him a bit more palatable…especially his interactions with Shireen. Of course, with Jon heading off to Hardhome and Stannis having left Castle Black to ride down the Kingsroad for Winterfell (and eventually King’s Landing), I’m left wondering what’s left at The Wall. Sure, Maester Aemon and Sam and Gilly are there for now, but how long will that last? I was under the impression that we wouldn’t see their travels in the show, but after Sunday’s episode (Maester Aemon saying he’s dying and lamenting Daenerys being “alone”; Sam talking to Gilly about the Citadel) I’m back to wondering if maybe that assumption was wrong. Arya, however, is still on track. While they of course made some changes to her story, they were all minor in the grand scheme of things, and I assume they’ll continue speeding up her story. Thankfully that is easy to get used to…but on the flip side of that coin, any and everything they’re doing with Sansa is decidedly not. Several Geekiary writers already opined over the awful course Sansa’s story has taken, because even with all the weird and/or outright bad decisions the writers have made in this show, the vast majority of viewers – book readers or not – did not see this whole Sansa/Ramsay thing coming. 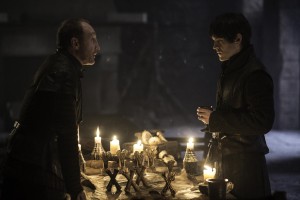 And no, I don’t care what excuses the show runners are making for betrothing Sansa to Ramsay. The absolute only way I will be able to move on from this sick, twisted turn of events is if she never actually has to marry him. While some people apparently actually “love” the “sick…twisted” Ramsay/Reek/Jeyne Poole storyline and would rejoice to see it happen to Sansa, that’s not something I can fathom…and in fact, the idea that people would actually enjoy seeing it play out on screen disgusts me.

Another upsetting change was Ser Barristan’s untimely death, though I personally think it’s a logical change. He’d told Dany all he needed to about her family’s past, and he went out a hero (though being killed by a bunch of Sons of the Harpy wasn’t exactly the way I pictured the infamous Barristan Selmy dying). 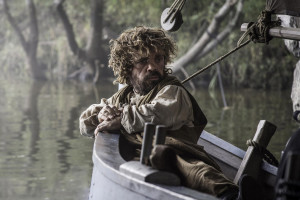 While Dany is still having trouble in Meereen (and honestly I just don’t feel like there’s much to say there; as long as the writers don’t drag this out any longer than they have to I’ll at least be somewhat content), Tyrion finally got some action now that he’s traveling with Jorah Connington – I mean, Mormont. Jorah Mormont. At this point I’m just hoping it won’t be much longer before our intrepid duo arrives in Meereen and stirs up what will hopefully be some more interesting trouble there…but hey, not before they pass through Valyria first, because the show is really jonesing to go out of its way to spoil all the cool things for us book readers, no?

Finally the question of what’s going to happen in Episode 9 is still out there! Episode 7 is titled “The Gift”, which makes me think it will be heavily focused on Arya and the idea of the House of Black and White giving the gift of death to those who are ready for it – or who deserve it. Next is “Hardhome”, which is pretty self-explanatory. But as of yet we don’t know the titles for Episodes 9 and 10…though at the rate things are going I suppose The Big Thing could still be Daznak’s Pit.

In Round 1 I made it very clear that it was past time for book readers to ask themselves if they can enjoy the show as a separate entity, and I for one had really convinced myself I could do so…but “Kill the Boy” was one big snoozefest, and between that and how worked up I am about Sansa’s situation, I’m back to wondering how much more I can put up with.

But what about anyone else out there? Ideas on what might happen in Episode 9? Have you successfully separated the show from the books, or are you still struggling with some of the changes – or with the show as a whole? I’d love to hear from fellow book readers, so join the discussion in the comments! 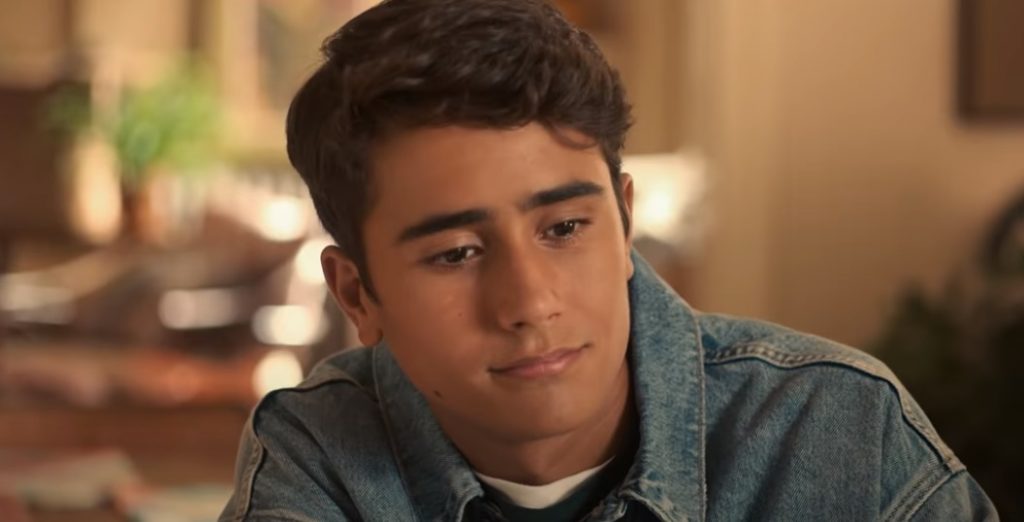 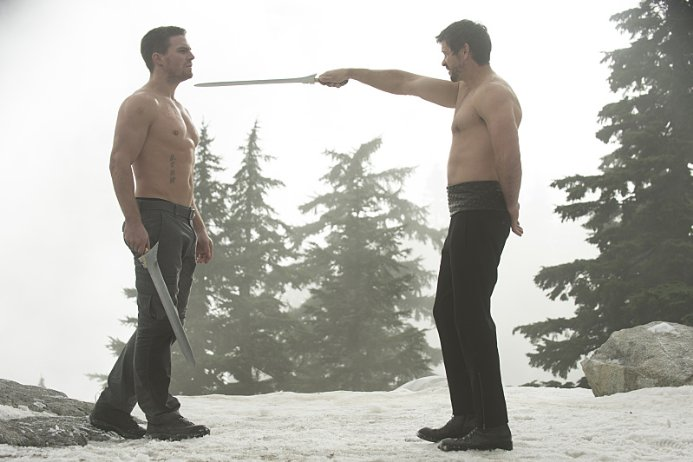 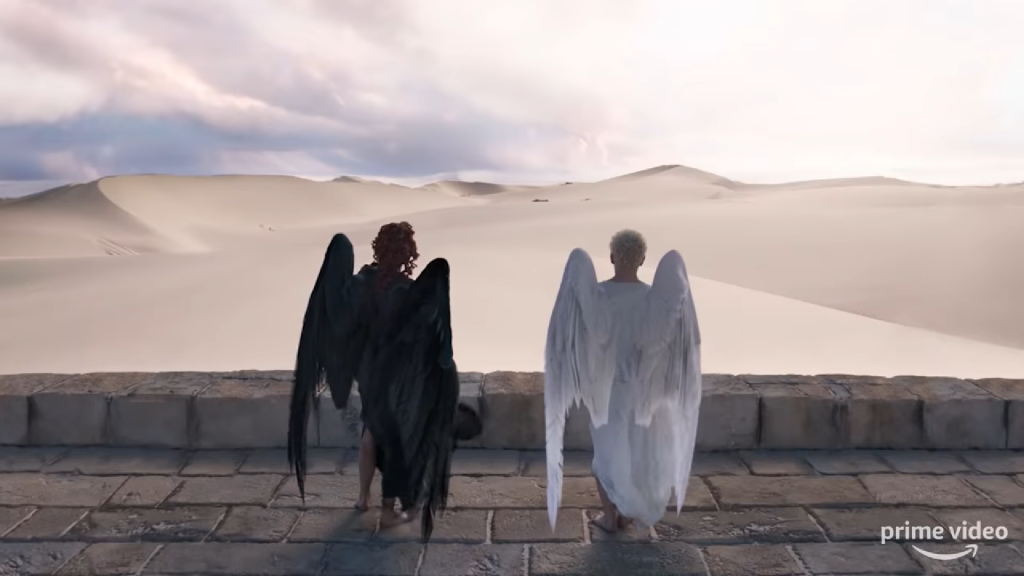