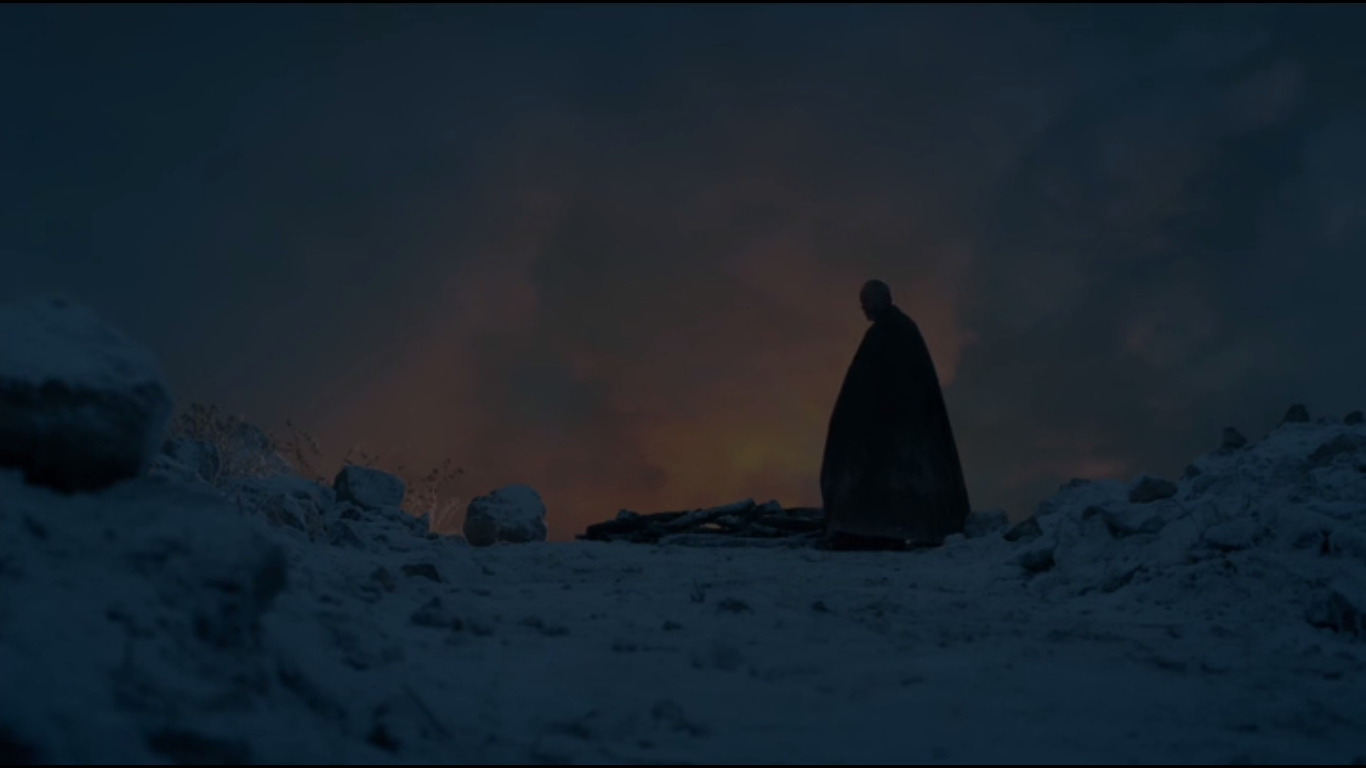 “Battle of the Bastards” was nearly perfect in every way.  This was the episode of the season I’ve been waiting for.

The fact that “Battle of the Bastards” focused on the two most compelling story lines is the primary reason it worked so well.  King’s Landing has been boring.  Bran’s story has been upsetting, but not in the good dramatic tension sort of way that makes dramatic stories work.  And Arya, poor Arya, has finally gotten interesting after a long stalled out plot line.  Here we focused on the Second Battle of Winterfell, aka the “Battle of Bastards,” and the Second Siege of Meereen.  These are the stories I care about.  This is what I’m here for.  It was a very battle-focused episode, but it worked well.

The Second Battle of Winterfell is one of the best on screen battles this show has ever shown.  Most of the other battles I enjoyed, such as the Battle of Blackwater, were large and flashy and visually stunning, but this battle was much more visceral.  Ground battles haven’t always been portrayed well on this show.  We can all remember back when entire battle took place from Tyrion’s perspective, which meant most of it got skipped entirely as he was trampled underfoot and knocked out.  This battle stuck with multiple key players. We saw things largely from Jon Snow’s perspective to start, but also from Tormund and Davos’s perspective.  While Ramsay wasn’t a direct participant until the end, we saw his perspective too.  Hell, even Sansa got a POV shot near the end of the battle as she brought in the Vale army to rescue them at the last minute.  The battle was thoroughly covered from many angles. 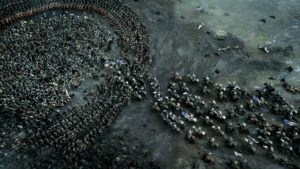 Speaking of the Vale army, that was my only real complaint about the battle.  It was necessary to bring them in and it added to the dramatic tension of the battle, but we’ve seen armies come in for aid at the last second before.  This is the same thing that happened at the Battle of the Blackwater when Loras and Tywin Lannister swooped in with reinforcements.  We also saw a similar event at the Battle of Castle Black when Stannis’s troops helped defend against the Wildling army.  It takes weeks if not months to traverse Westeros. And yet these armies keep showing up at just the right second.  Strange coincidence, no?

But that’s it.  That’s my only complaint for “Battle of the Bastards.”  And honestly I can see why they used this trope for a third time.  It’s effective.  It pushes the drama of the battle.  It’s just overused.  Try to avoid using this again, guys.  It’s becoming a crutch for your battle scenes.

The battle claimed yet another Stark.  This time Rickon was the one to fall, which doesn’t have nearly as much dramatic impact as the other Stark deaths thus far, but is still tragic.  Rickon’s death is what propelled Jon Snow to charge at the Bolton army alone.  It was a stupid decision, but Jon Snow has always been an emotional character.  He thinks strongly with his heart.  Here we see him seconds away from being reunited with a brother he hasn’t seen in years only to have him cut down feet away from him.  Add to the fact that this is his youngest brother, a child, and was being held captive in the castle they formally called home and yeah, I can see where he’s coming from. 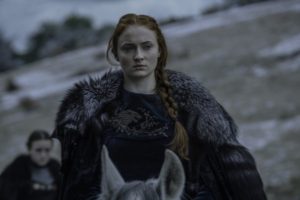 On the flip side, Sansa was cool and collected throughout it all.  Stress seemed to affect her very differently than it does Jon.  Whereas he act irrationally and straight from the heart, she’s become much more calculating and fierce.  They are not the same people they were the last time they saw each other.

The Battle of the Bastards itself was gruesome.  There were guts everywhere and Jon Snow was dripping with blood by the end of it. But this show has never shied away from gore. I could have done without seeing a guy holding his own intestines, but this is what the show does.  And these are the horrors of war.  The fact that Jon Snow is there in the thick of it witnessing these atrocities while Ramsay Bolton is off on a hill overseeing it all from a distance speaks volumes about their characters.  We didn’t really need more evidence that Ramsay is a terrible person, but it was a nice contrast to see how they each choose to engage in battle.

The Battle of the Bastards ends with the remaining army storming through the gates of Winterfell with the help of the giant, Wun Weg Wn Dar.  Unfortunately we lose Wun Weg Wun Dar to an arrow through the eye.  Here Jon Snow has a chance to kill Ramsay once and for all, but he backs off at the last second.  I’ve been hoping for many weeks now that when it was finally time for Ramsay to meet his end that it’d be at the hands of Sansa.  I got my wish.  She turned his own dogs against him.  She almost turns away before they start to attack, but she stays.  She watches as the dogs he’s been starving for seven days begin to tear him limb from limb.  The whole scene was very cathartic. This was needed.  I never liked what was done to Sansa in the first place, but this was an excellent way to give her the closure she needed.  All hail the Queen of the North. 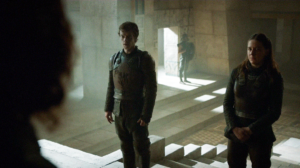 Speaking of Queens, everything is shaping up nicely in Meereen.  Sure, it got sacked.  Again.  And that sucks. But it also gave me the opportunity to have my two favorite women finally meet.  I’ve mentioned before that my Game of Thrones end game is basically the women being in charge of every region.  To my surprise, it looks like this might actually happen.  Considering the writers propensity for writing unnecessary nudity and using sexual assault as a plot device, I figured it’d veer into a completely different direction. But oh no, my friends.  We have the Mother of Dragons making a deal with the heirs to the Iron Islands to put Yara in charge of them while Daenerys takes the Iron Throne.  And oh my god did they flirt?  Did Yara and Daenerys flirt?!  Be still my beating heart!

My end game also has Sansa ruling the North, which is a real possibility at this point.  It also has Tyrion serving as Hand of the Queen, which is essentially what’s happening.  And it also has Jon Snow being in charge up at the Wall.  Which is… the reality of the situation even if he isn’t present at this exact moment.  I never in a million years thought I’d get what I wanted out of this story, but I was happy to go along for the ride.  But holy crap, guys, I’m getting my wish. Things are playing out exactly as I want them to.

“Battle of the Bastards” went above and beyond my expectations.  Then again, the ninth episode of the season is usually the best one anyway, so I shouldn’t be surprised.  So much of this season has been bogged down with pacing problems that I was afraid that I wouldn’t be able to enjoy the story they were trying to tell.  And let’s be real, I was afraid that veering away from the books would damage my enjoyment of the show, too.  Surprisingly, the lack of book material hasn’t bothered me yet (we’ll see if that tune changes when Winds of Winter comes out), but the pacing has been infuriating.  “Battle of the Bastards,” though, has put all of my favorite stories onto trajectories I’m more than thrilled about.  I’m over the moon with this episode. 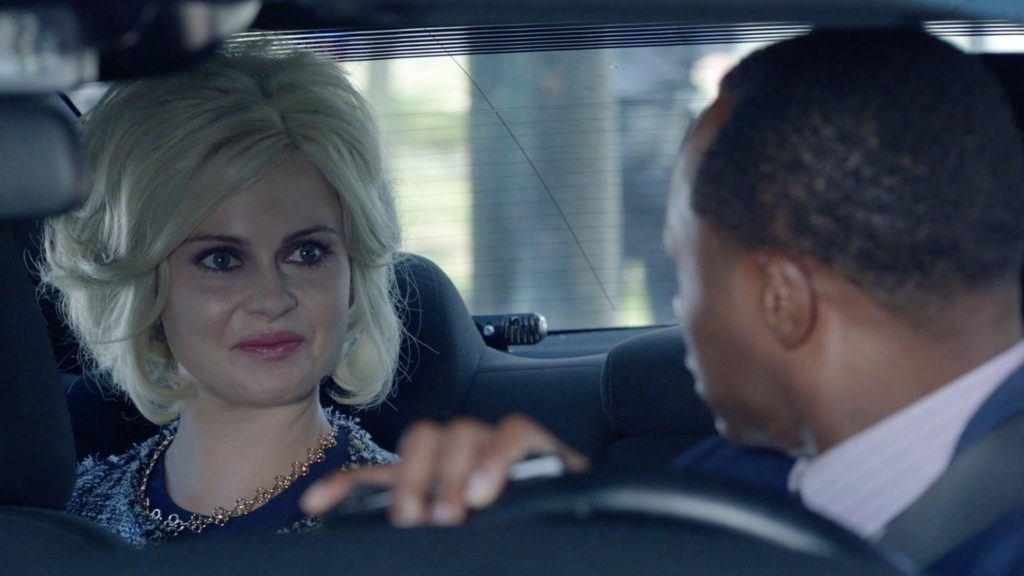 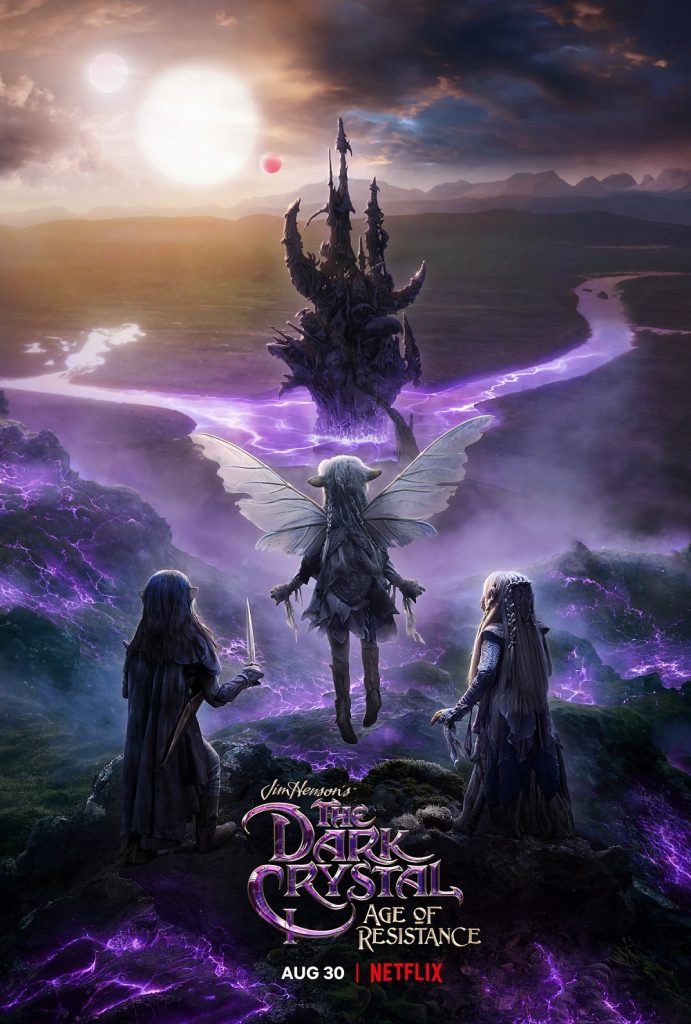