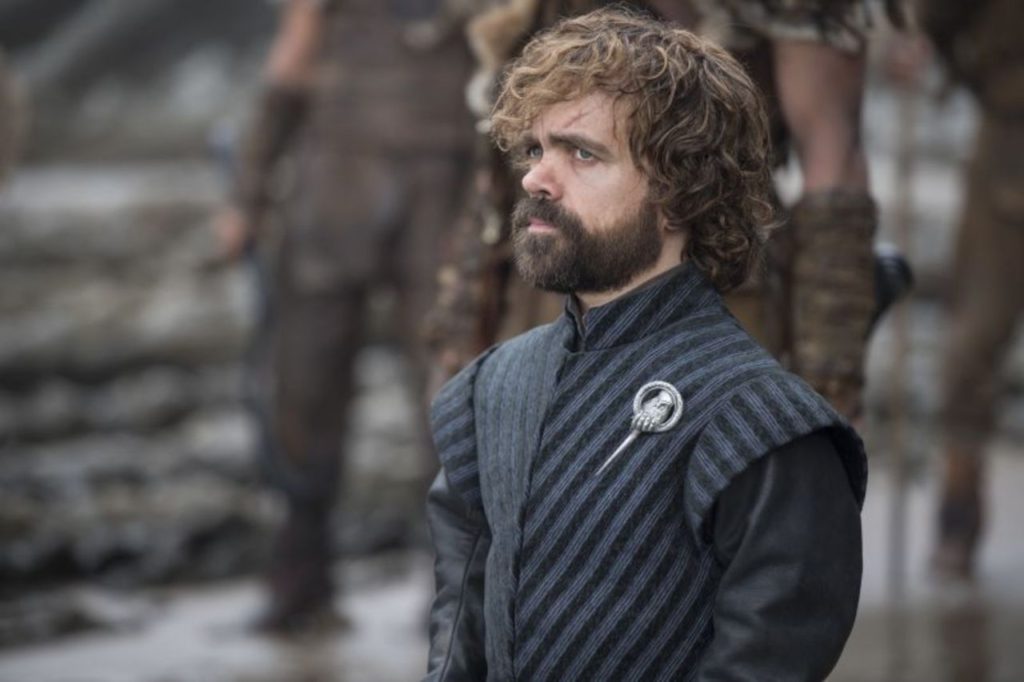 Game of Thrones is a show I have a love/hate relationship with.  “The Queen’s Justice” is an episode that reminds me mostly of what I love about the show, but the things I hate still lurk in the background. 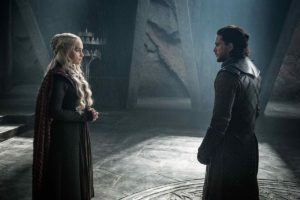 The bulk of “The Queen’s Justice” revolved around Jon Snow and Daenerys meeting and growing to understand each other.  These interactions were satisfying and I’m glad we finally got them.  Both Jon and Daenerys are incredibly strong willed, so if either of them had given in to the other’s demands immediately it just wouldn’t have felt genuine.  But they are also both also realistic people, so them working towards some sort of compromise and partnership is the way I’d always hoped this would go.

But on top of the (arguably) two most popular characters on the show finally meeting, we got Jon’s first encounter with the dragons as well as Jon’s reunion with Tyrion.  Both were also extremely satisfying and desperately wanted.  There was a lot of fangirling on my behalf during pretty much all of this.  The deadpan humor underlying many of these interactions was also enjoyable.  The most hilarious part was when Missandei introduced Daenerys with her long title while Davos simply says “this is Jon Snow.  He’s King of the North.”  The show isn’t often funny, but when it is it’s spot on.

We are also finally getting some movement on the actual big threat of the show.  When Jon Snow made it clear that if the White Walkers make it past the wall and “we are squabbling amongst ourselves, we’re finished.”  Finally someone said it.  The sentiment has been obvious and a lot of the characters who have been dealing with the armies of the dead are obviously frustrated, but this is the most straightforward about the issue I’ve seen any character be so far.  And it worked… sort of.  While Daenerys doesn’t seem convinced, Tyrion is.  And that’s important.  Now the North has access to Dragonglass and can finally have a chance to fight back.

While Jon is interacting with Daenerys at Dragonstone, we have Sansa in charge of the North.  This is kind of my end game.  She’s exactly where I want her to be doing what I want her to do.  When I heard there was going to be another Stark reunion this week, I had high hopes that she’d be reunited with Arya and more pieces of my end game would be put into place.  Sadly it was just Bran.  Which yes, it’s great the Starks are returning home to Winterfell, but of all the characters on the show, he’s the one I often forget exists.  It’s unfortunate, really, because the actor who plays him is a charming kid.

“The Queen’s Justice” was almost perfect until Euron Greyjoy had to make violence sexual again.  While his niece and the Sand Snakes were being led behind him he had to make a comment about how hard he was.  This show has done enough damage with sexual violence already, so one little offhand comment that might not have made me notice before stood out.  While his offhand comment could be interpreted as him being hard from audience adoration, that adoration coming from violence is in and of itself extremely uncomfortable with the full context of this show’s track record. 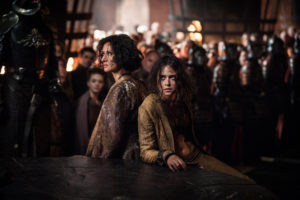 Trigger Warning for the following paragraph for rape.

Thankfully the torture of the Sand Snakes didn’t go too far down that route.  The closest it came was the kiss with Cersei when she transferred the poison to Ellaria’s daughter.  Considering this show’s track record I just assumed they’d have to put in rape here, too.  How sad is it that a slow poison death and torture seems not so bad? Because hey, at least nobody got raped.  But that’s where I’m at with the show at this point.  Any violent scene against a woman where she gets out of it without being raped is a good thing.

Moving away from the uncomfortable parts of the episode, I must say that I’m ridiculously proud of Samwell Tarly.  He’s a character that didn’t seem all that significant at first, but it’s become more and more obvious that he’s actually something quite special as the show goes on.  And that “something special” isn’t what makes so many other characters on the show special.  He doesn’t have dragons or a dire wolf.  He hasn’t been resurrected from the dead.  He doesn’t have an army or a castle.  He has his own intelligence, kind heart, and determination (even when he’s scared as hell).  I have no doubt that things would be a lot worse off for Westeros if Samwell Tarly did not exist.

I hope this ration of love versus hate continues.  Overall “The Queen’s Justice” was an extremely enjoyable episode, despite Euron randomly talking about his own erection while he’s surrounded by violence.  In these first three episodes we’ve set a lot of great story lines into motion and I’m looking forward to them retaining their momentum as we race towards the conclusion of the show.