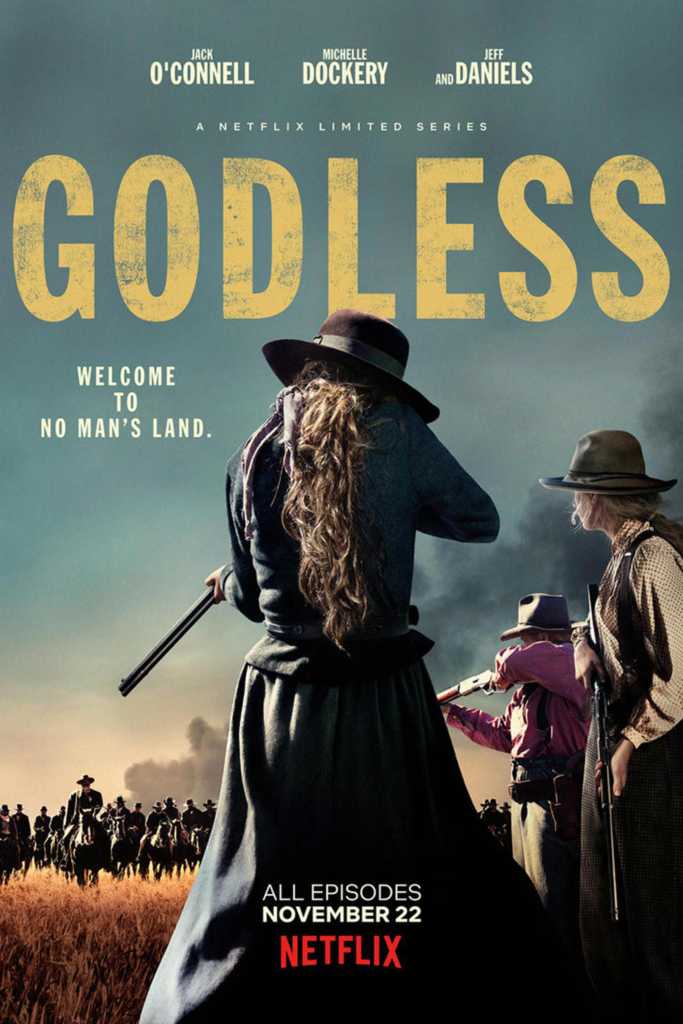 Netflix’s Godless is one of those shows that has problematic themes but the potential of what it could have been will help you sit through the ride.

I’m not sure if the creators of Godless, Scott Frank and Steven Soderberg, pitched this seven-episode limited series as a show about a female-run town or if Netflix’s marketing department promoted it as such. While the little town of La Belle has women trying to make a life for their families after a tragic mining accident, Godless spends too much time on man pain. That’s not to say that the show isn’t enjoyable, it’s just that it had so much potential to be something amazing.

Godless can be defined as a very decent Western that’s predictable and filled with cliches. You already know how the story is going to end but it’s the time the series takes to flesh out certain characters that make the viewing experience worthwhile.

The main conflict is between Frank Griffin (Jeff Daniels) and Roy Goode (Jack O’Connell). Roy decides to break away from Frank’s gang and that results in their personal war reaching the town of La Belle.

One of the first things you’ll notice about Godless is the scenery and production values. There’s so much open space and I love it! The hills, the grasslands, the clear skies, the galloping horses; all of it perfectly offers what one expects to see from a Western. Written and directed by Scott Frank (who also worked on Logan), you can see him taking everything quite seriously as he sets the tone with the visuals.

The cast is another great thing about Godless. While everyone did a great job, I’ll talk about my favorites. I’ve been a fan of Michelle Dockery since her Downtown Abbey days. She’s also currently starring in TNT’s Good Behavior, another wonderful show I hope to talk about later.

In Godless, Dockery plays Alice, a twice-widowed mother who’s trying her best to make a life for herself and her half-Paiute son. There’s a vulnerability below Alice’s tough exterior and Dockery portrays it with magnetizing gravitas.

Merrit Wever (Denise from The Walking Dead) plays Mary Agnes McNue, another widow. She becomes the leader of La Belle after her husband’s death and is the reason the town is able to defend itself when Frank arrives. Scott McNairy as Sheriff Bill McNue, Mary’s brother, ends up becoming a character you’ll start rooting for. And Thomas Brodie-Sangster as Whitey Winn, the town deputy, knows how to light up the screen. The funny thing is that Thomas and Jack O’Connell are the same age but Thomas still looks like a child!

It’s the cast that makes you feel for each character when the final gunfight occurs. Each death and bullet wound is sure to elicit an emotion. You’ll want everyone to stay safe, even the background characters.

I was surprised to see Godless handle queer representation the way it did. Mary has a very sweet romance with resident ex-prostitute-turned-teacher Callie Dunne (played by Tess Frazer and looks a bit like Anne Hathaway). There’s a bit of relationship drama in there but everything works out for the best in the end.

The residents of La Belle know about the two but no one says anything negative and are quite accepting. Considering the gore and violence in the show, the fact that two women are portrayed in a loving relationship without anyone making a bigoted deal out of it was pleasing to see. The other women could’ve easily stopped Callie from teaching their kids because of her being a bad influence or drove her and Mary out of La Belle but they didn’t and it was great.

I know that sometimes sexual assault can play an integral part in a story and character development. However, I also know that a lot of writers use it for shock value or to prop up a male character (Game of Thrones and even Hulu’s Marvel’s Runaways are guilty).

Godless is a show that isn’t any better. Sexual assault is used for shock value in this series, doing it no favors. I even mentioned this near the end of our The Bitching Dead: Issue #2 webcast.

You can literally edit out all such scenes and the story wouldn’t change the slightest. I literally went “Seriously! Again?” during some of the episodes. Furthermore, these scenes are quite graphic and they really take away from how good Godless‘ narrative could have been.

Godless focuses a lot on stereotypical male characters, which is a pity considering all the potential it has for unique storytelling. Most of the screentime is taken up by Frank Griffin as he destroys towns in pursuit of Roy Goode. There are monologues and flashbacks that try to flesh out Frank which I could’ve done without. He’s the villain of the story and showing his difficult past isn’t going to make me hate him less.

The same goes for Roy Goode. He’s your typical bad-boy-turned-good and viewing his flashbacks has a repetitive feel to them. We’ve seen characters like Roy Goode before and the show wasting time on him makes no sense.

A far more interesting story awaits in La Belle and Godless doesn’t utilize the potential. The tragic story of the mining accident that hits the town is something I wish the show had explored more of. The flashback showing the women walking with their husbands to the mine, all happy and chatty, before disaster struck is probably one of the best scenes in Godless.

After the incident, the women took control of their lives and their little town during a sexist and unlawful era. They worked together as a community to stop La Belle from becoming a ghost town and not seeing more of their journey is disappointing. Similarly, the show also got rid of “Blackton” way too soon once Griffin arrived at this all-black community a short distance away from La Belle. Seeing all the lost potential is frankly quite infuriating.

The show could’ve been far better if it focused on:

Instead of all those awesome plot points, Scott Frank makes Godless all about a good guy vs bad guy story we’ve seen numerous times. It’s clear from the show’s official trailer that Netflix’s marketing department saw the untapped storytelling potential surrounding La Belle. What’s unfortunate is that Scott and his team didn’t deliver.

Having said all that, I do think you should consider watching Godless. The seven-episode series does have its faults but it’s very good when the female characters appear on the screen and if you’re into a couple of hours filled with Western cliches. It might even give some budding author or screenwriter the motivation to create something that fills the niche Godless had the potential to.

Released on November 22, 2017, Godless is currently available to stream on Netflix. Feel free to share your thoughts with us!

Previous:AnimeNYC 2017: An Interview with the Haikyuu English Dub Cast
Next: Come to the Dark Side – Or At Least Have a Drink There in DC’s Darkside Bar