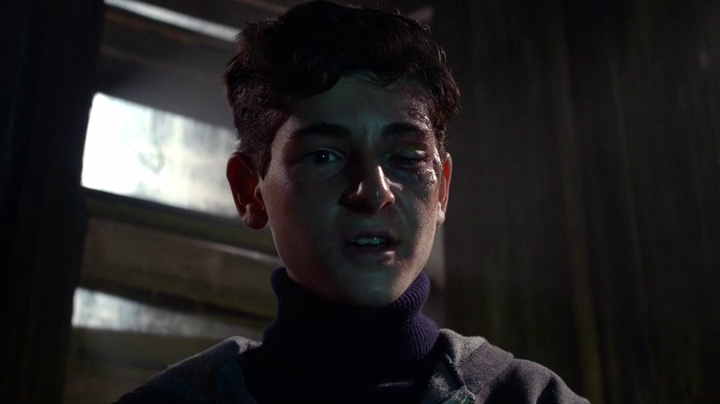 With how things went in ‘Mad Grey Dawn’, this week’s episode of Gotham ended up becoming the best one the current season has offered viewers.

I wasn’t expecting the show to continue dealing with James Gordon’s storyline and making him face the consequences of killing Theo Galavan. That is why it came as a surprise to me when ‘Mad Grey Dawn’ showed Internal Affairs reopening the murder case because of an eye witness. The rest of the episode ended up becoming an elaborate trap in which Gordon fell, ultimately leading to his imprisonment. While it was entertaining to see Gordon trying to clear his name, it was Nygma who made the episode for me.

Nygma finally accepted his alter-ego the Riddler and proved to the audience that he’s a villain who should not be taken lightly. He was always steps ahead of Gordon in his aim to send the detective away from his life. I know Gordon will find a way to clear his name, but at least we got to see the Riddler in action. Let’s see if he sets his eyes on making Gotham descend into panic and chaos down the road.

Penguin also got some character development during ‘Mad Grey Dawn’. He returned to Butch but was kicked out from his old home. He then went to visit his mother’s grave and that’s where he met his father. The moment Penguin was introduced to the rest of his family I knew he was in trouble. With his father being the heir to a great fortune, the rest of the family was clearly not excited about the addition of another successor. Penguin’s life is in danger and I have a feeling that trying to protect himself will make him remember his villainous ways regardless of the therapies Hugo Strange has performed on him. I need my psychotic Penguin back! I can’t stand him being timid and kind to others.

The best parts of ‘Mad Grey Dawn’ were clearly the scenes featuring Baby Bruce Wayne and Kitty Selina. I love those two together. Selina decided to rob the gang in control of the Magic Mushroom business, which led to us seeing little bud Ivy again. I just didn’t want this little sub-plot to end. I could watch a whole show solely focused on the teenage versions of the iconic characters from the DC Comics.

Baby Bruce remembered Alfred’s training, which led to his victory against the thugs who had caught him and Selina. While it is understandable that Gotham couldn’t send Bruce away to some remote location in order to train, the fact that the writers are showing him develop in a different manner is appreciated. Baby Bruce has a lot of things to learn before he can become Batman, and the streets of Gotham can provide him with valuable knowledge and training.

With Gordon being sent to jail, there’s no one in Gotham who can stand up to the villains. In a surprising twist, Barbara Kean woke up from her coma. Barbara is one of my favorite characters on the show. That is why I’m looking forward to seeing how the writers will deal with her development. Will Dr. Hugo Strange perform his psychological experiments on her as well? And if Barbara is the show’s version of the Joker or Harley Quinn, will those experiments even work on her? Right now I want to see Barbara lead a team of maniacs and bust Gordon out of jail.

What did you think of Gotham this week? Did you enjoy the Riddler in ‘Mad Grey Dawn’? Let us know!