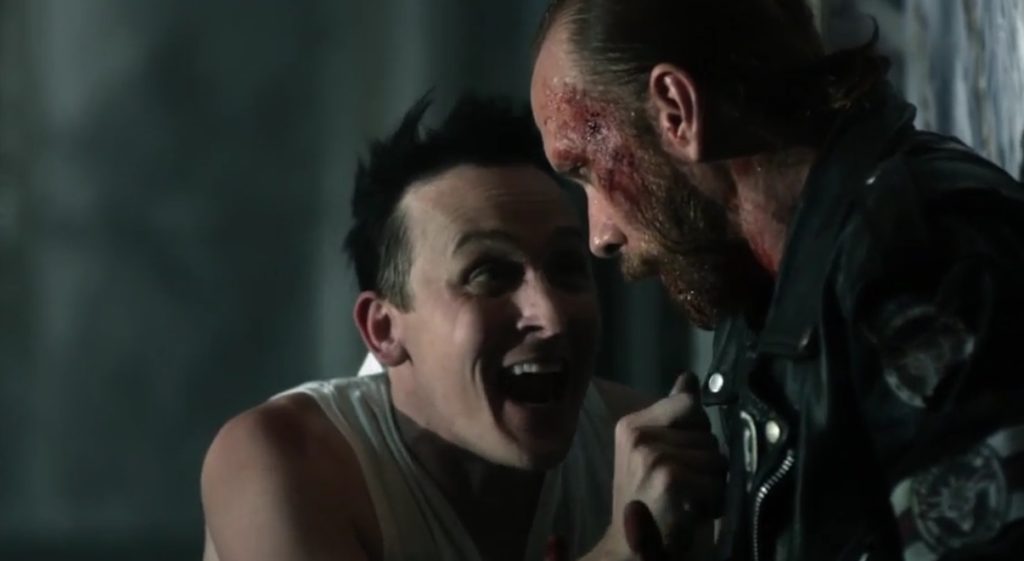 Oswald with an injured gang member in ‘Penguin, Our Hero’ (Image: Screengrab)

I thought Gotham would have a tighter narrative considering the fifth season only has 12 episodes, but I was wrong. ‘Trespassers’ was a mess (and not the enjoyable kind). However, ‘Penguin, Our Hero’ served up a number of interesting events.

I’m going to quickly talk about ‘Trespassers’ and get it out of the way. Baby Bruce’s mission to find The Witch led him to Poison Ivy. Turns out, Ivy has a magical seed which can heal Kitty Selina’s injury. Sigh! This is Gotham so anything is possible, even though the way Kitty Selina is cured reeked of plot convenience. The side effects of the seed include bringing forth her darker feline side because Catwoman!

As for Gordon and the rest, our boring protagonist went to some territory to save people even though there is a bounty on his head courtesy of Penguin. Barbara walked in at the last minute to save Jim and told him Oswald needed to be killed. While all of that was happening, Nygma was busy trying to figure out what he had been doing during the night.

Again, ‘Trespassers’ was a mess of an episode, and I do think more than half of it could have been left on the cutting floor.

Coming to ‘Penguin, Our Hero,’ Robin Lord Taylor knows how to chew up the scenery, and the writers gave him an entire episode just to do that. It was wonderful to behold!

From Oswald listening to his praises sung by a personal choir to deciding to work with Gordon after teaming up with the Street Demons to destroy Haven, Taylor’s interpretation of Penguin is one of the best things to come out of Gotham.

Gordon can’t seem to catch a break. Whenever he tries to do something good, he is pulled back by other forces. The end of ‘Penguin, Our Hero’ took me by surprise. Is Jeremiah doing all of the horrible stuff or is some other mystery villain out to destroy Gordon’s efforts to save the people of the city?

On a side mission, Baby Bruce and Kitty Selina walked into the dark side of Gotham to confront Jeremiah. The so-called Joker seems to have started a religion of some kind. It was a very Jeremiah thing to do. Another highlight of the episode was Ecco appearing as proto-Harley Quinn. I know there are many fans of Margot Robbie’s Quinn out there. However, I enjoyed seeing what Gotham had decided to do with the famous comic book character.

Francesca Root-Dodson’s Quinn gave me chills in a manner Robbie’s Quinn had failed to do in Suicide Squad. Robbie’s Quinn still has some good inside of her so you aren’t too worried. However, Dodson’s Quinn is completely crazy. The fact that she can’t be saved is what amplifies the scare factor surrounding her. I look forward to seeing more of Gotham’s Harley Quinn and how she continues to interact with Jeremiah.

In the end, ‘Penguin, Our Hero’ left Gordon with failure while Baby Bruce tries to save Kitty Selina from doing something she won’t be able to take back. It was an enjoyable episode and I can’t wait for next week!

What did you think of Gotham? Did you enjoy ‘Penguin, Our Hero’? Let us know.

Previous:“A Silent Voice” Returns to US Theaters This January
Next: “Now Apocalypse” Trailer Makes the Upcoming Show Feel Problematic to Me