Suicide Squad is not the worst movie I’ve ever seen, but it tries its hardest to make the list. A combination of poor editing, unusual music choices, and a marketing campaign that wasn’t entirely honest made this movie pretty meh.

I think what Suicide Squad was aiming for was a combination of Guardians of the Galaxy and Deadpool. There are some legitimately funny moments – mostly from Will Smith’s Deadshot – but most of the comedic attempts fall flat. It didn’t have the heart of Guardians or the self-awareness of Deadpool. Mostly, this is a movie that thinks too highly of itself and suffers because of that.

WARNING: Spoilers for Suicide Squad. Read at your own risk!

If you went into this film thinking that Jared Leto as the Joker was an important part – an understandable assumption, given that he is all over the promotional material – then you would probably feel cheated upon exiting to realize that he had maybe ten minutes of screen time. Rather than being the main villain in a movie full of villains, he serves more as set decoration, propping up Harley Quinn’s (Margot Robbie) backstory and emotional arc. Also, I found his portrayal to be weak and uninspired, but this could be from a combination of comparing him to Heath Ledger and just plain not liking Jared Leto. He comes across as more ludicrous than insane or dangerous, and I have never gotten over the ridiculous teeth.

Actually, Suicide Squad‘s main villain is Enchantress (Cara Delevingne), who starts out the movie under the control of Amanda Waller (Viola Davis) and eventually breaks free, frees the trapped spirit of her brother, and proceeds to wreak havoc, hell-bent on destroying the world because of…something that was never really obvious. She is definitely a powerful adversary, but she spends most of the movie assembling some sort of cosmic weapon while her brother does all the heavy lifting, so she’s kind of disappointing as a big bad.

To be honest, the most unbelievable part of the entire movie was when archaeologist June Moone straight up breaks an ancient statue, releasing the spirit of Enchantress who then inhabits her body. Seriously, the guy who looks like a crocodile is fine, but no way does a world-renowned archaeologist destroys something like that. 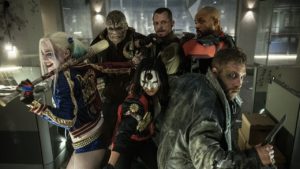 Suicide Squad also suffers from poor acting. Smith, Davis, and Robbie are genuinely pretty great, and actually the relationship between Deadshot and Harley was a standout part of an otherwise mediocre film, but I’ve never been a fan of Jai Courtney (Captain Boomerang) or Delevingne. Delevingne’s Enchantress is cheesy and over-the-top, and Boomerang is just kind of annoying.

The music choices were odd; here is an area where I think they were attempting to imitate Guardians of the Galaxy, which used its retro soundtrack very well. In Suicide Squad, I don’t think that the songs they chose went with the scenes in which they were placed, and in general didn’t seem to fit the overall tone of the movie.

Speaking of tone, this is clearly a film that was aiming for light-hearted but didn’t quite make it. It was way too dark visually, and while the action scenes were pretty decent, it was hard to follow them because I just couldn’t see what was going on. Most of the film takes place over the course of one night, and the majority of the villains they fight are humans who have been warped by dark magic into weird all-black porcupine-looking beings.

The pacing problems are mostly at the beginning with the introductory sequences. Each character on the squad gets an introduction, though Deadshot and Harley Quinn’s are the longest, which breaks up the flow. If they had all been of a similar length, it might not have seemed so bad. Not to mention there are random flashbacks peppered throughout (mostly of Harley and the Joker) which also detract from the action.

And I could have done without the casual sexism. The movie doesn’t treat Harley any better than some of the characters do, and honestly the guards’ treatment of her at their special prison is just beyond gross and demeaning.

Bottom line is this: if you were going to see this movie, then see it. Form your own opinions. But if you were on the fence, maybe wait for it to hit Netflix or HBO.