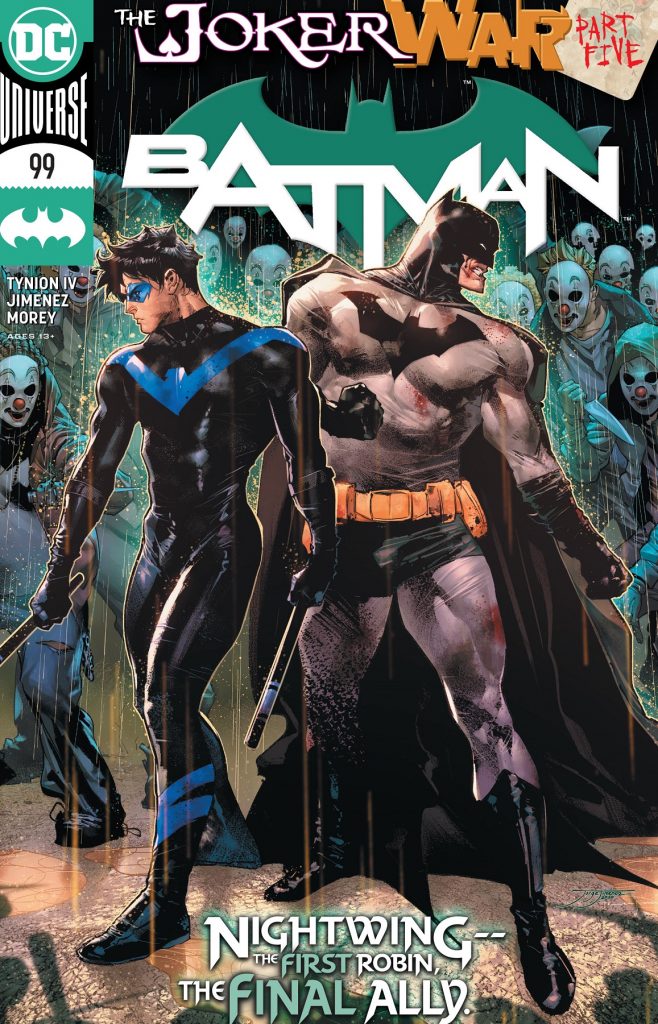 As usual, let’s begin by talking about Batman. This week’s Batman issue 99 had some interesting moments, and I really hope that writer James Tynion IV is able to build on at least one of them. The moment in question was the conversation Harley Quinn had with Bruce when he’s on his way to confront Joker.

Bruce always refusing to kill the Joker never made sense to me. Even Harley said that Bruce’s to blame for the damage Joker’s caused through the decades and the numerous people he’s killed. At this point in DC Comics lore, the Joker needs to be stopped. Bruce continuing to throw the Joker in Arkham when we know he will escape again is useless. Fingers crossed that Tynion’s able to deliver something different in the finale.

As for the overall arc of “The Joker War” and what was shown in Batman issue 99, I have to say that I’m quite disappointed. In my opinion, the Joker works best when he’s chaos personified. Tynion decided to make Joker into someone who had planned the destruction of Gotham for a very long time. Planning stuff makes Joker predictable, and I’m not here for it. 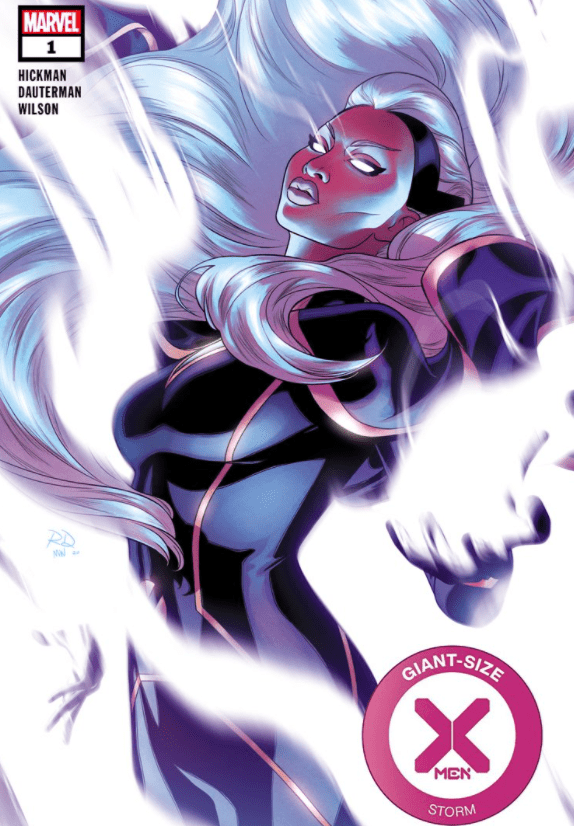 As a fan of Storm, I was anxiously waiting to read this issue by writer Jonathan Hickman. His 5-part Giant-Size X-Men series opened with the reveal that Storm had been infected by a techno-organic virus and she had only 30 days to live. Giant-Size X-Men: Storm issue 1 served as a conclusion to that story. It explored Storm’s impressive willpower and her love of living.

With the X-Men creating the Resurrection protocol, death doesn’t mean anything to them. However, for someone like Storm, who values life and is considered a Goddess that brings balance to nature, resurrection doesn’t mean you should easily give up being alive.

Due to the infection spreading through her body, one would think that she should kill herself and go through the Resurrection protocol. But no. Ororo Munro is a Goddess and she isn’t going down without a fight.

While I liked Monet realizing how to help Storm, I would have preferred a better explanation. Did it have to do with how Monet’s also living with an infection inside her? Or was it because she’s supposed to have superhuman intuition? Perhaps it was both?

I have to say that seeing Ororo not reach out to T’Challa or Shuri for help didn’t make sense to me. Also, the fact that I’m unsure when this story took place, maybe it wasn’t possible for Ororo to contact T’Challa or his sister? Again, I would have liked certain things to be explained better.

Seeing Ororo waiting for a miracle to happen instead of using all possible resources was also a weird decision. Storm’s not a passive character.

I will also say that the entire thing felt too rushed. I would have liked seeing Ororo going about her daily life and seeing how the infection was impacting her.

Anyway, Giant-Size X-Men: Storm issue 1 worked for what it was. Along with showcasing Storm’s resolve, the narrative sowed seeds for future story points. I’m looking forward to seeing what Hickman has planned for the X-Men.

As for the art, Russell Dauterman continued to deliver beautiful panels. You can tell he loves drawing Storm. Colorist Matthew Wilson came through with the colors. Now, while I appreciated the art, don’t think I forgot about the backlash the preview of this issue got online because of how light-skinned Storm and Monet appeared.

Marvel Comics making appropriate changes in the final printing was a step in the right direction, but it needs to be repeated that certain artists and colorists over at Marvel Comics need to realize that PoC are not white people with tans. 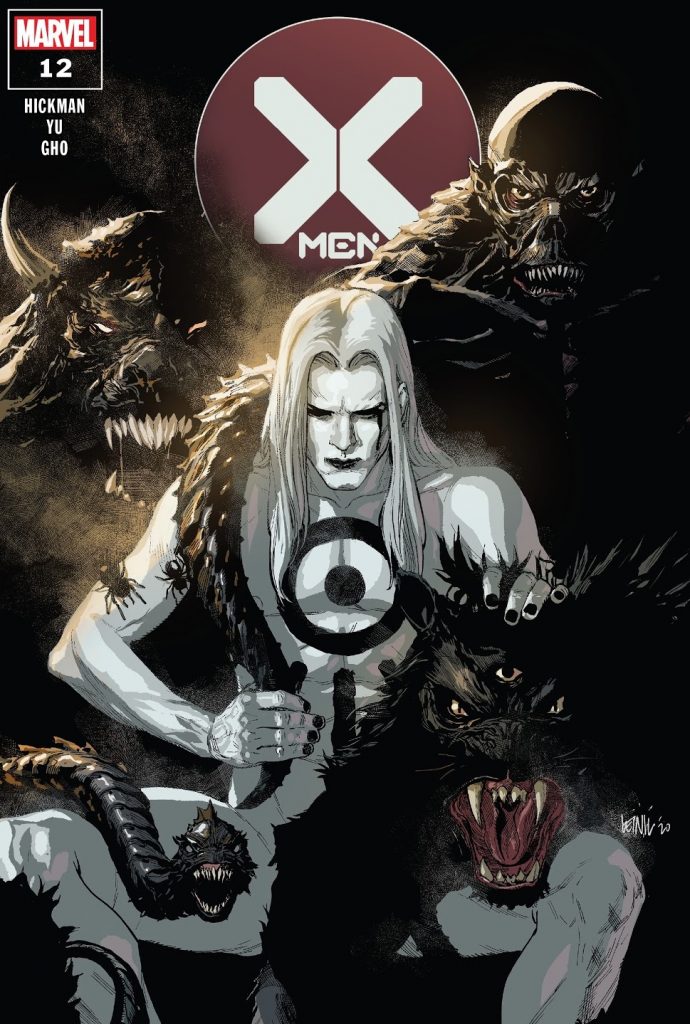 I think I need to read X-Men Issue 12 a couple of more times to fully grasp what happened. The current issue, by writer Jonathan Hickman, gave us a lot of history (involving new worlds and numerous new characters) that links to the upcoming X of Swords event.

At least, one thing’s for sure, the X-Men are going to face a lot of trouble battling that mysterious masked woman. 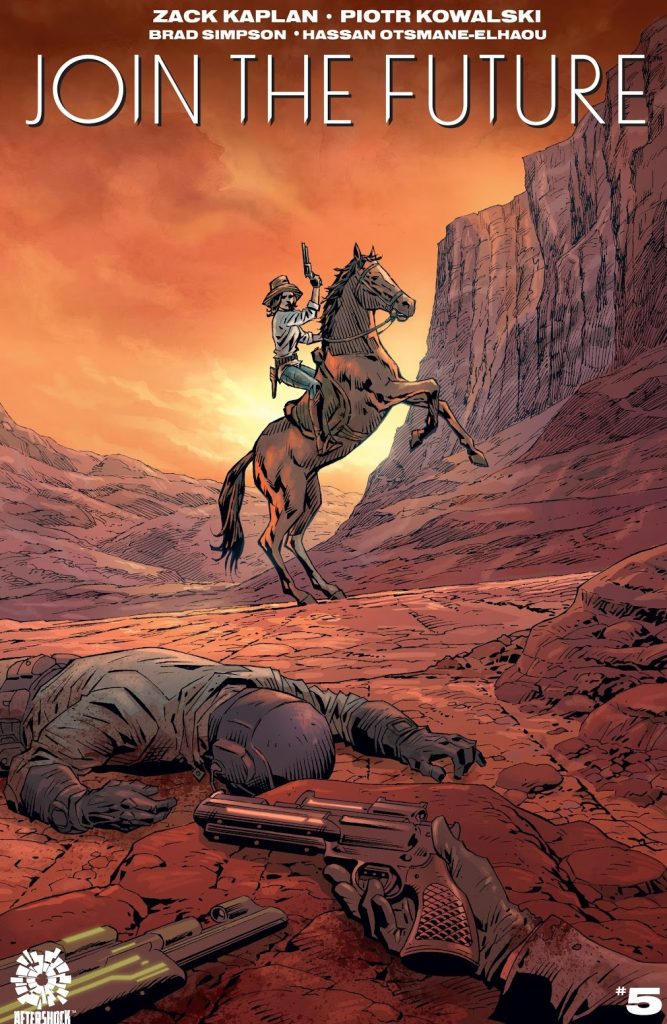 From writer Zack Kaplan, Join the Future issue 5 gave me what I was hoping for. It was so much fun seeing Clementine stand up to the guards working for the city. I hope this story comes back for another installment. I need to see Clementine wreck havoc on the city. She needs to uncover its secrets and liberate the residents. 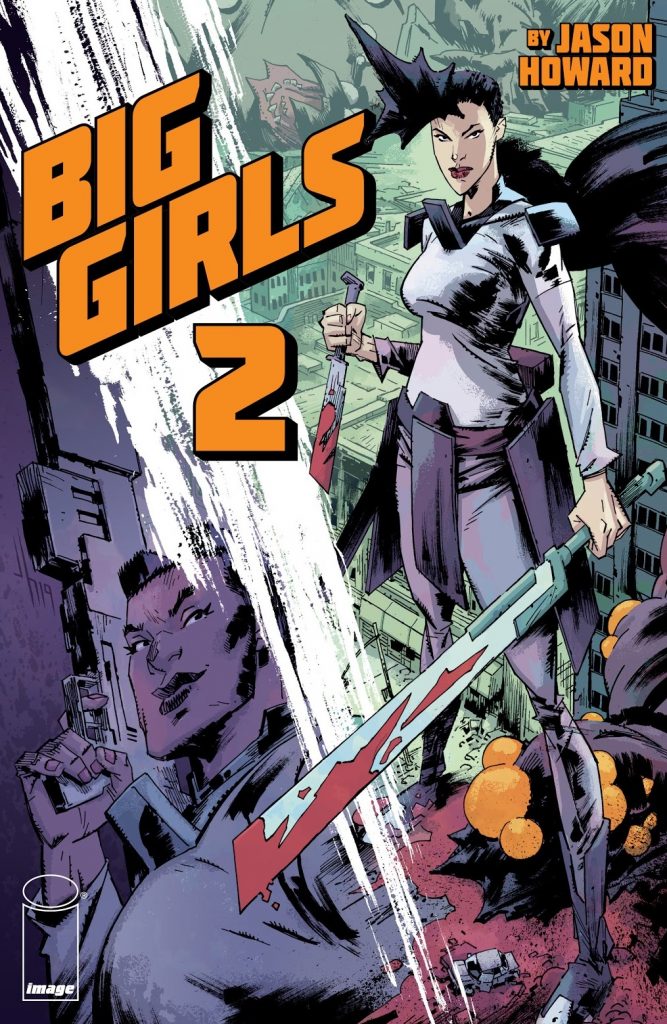 I am loving the story writer Jason Howard is sharing in Big Girls. The second issue had an action sequence and helped flesh out the main character named Ember. I understood her concern about killing mutated monsters that were once men. Considering how the issue ended, there’s (likely) more to said monsters than meets the eye. 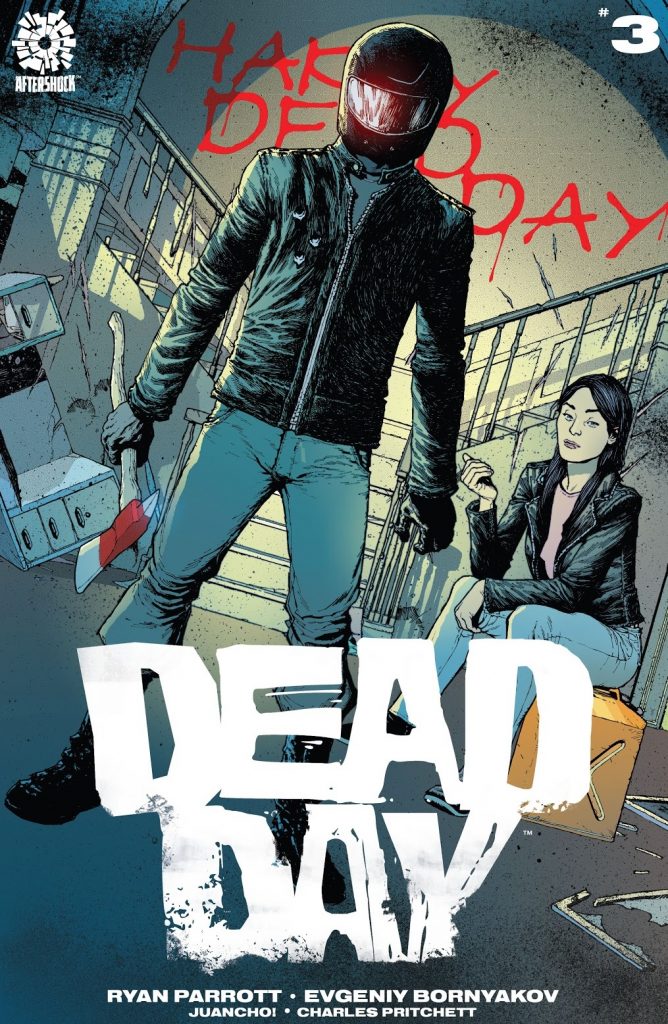 You know when you have a plan and you’re sure it won’t go wrong but it still does? That’s what happened in writer Ryan Parrott’s Dead Day issue 3, and I enjoyed everything about it. The issue went through three major plotlines. Jeremy finally got to confront his murderer. We also got a flashback to the day he died. Brandon continued his involvement with a cult. Melissa’s husband and daughter waited for her and Brandon to come back home. There was also a scene that showed that some of the undead aren’t really harmless.

I get that all of this might sound like a lot of jumping around in a single issue, but, in my opinion, it worked. And with two of the storylines coming together, I can’t wait to see what happens next. 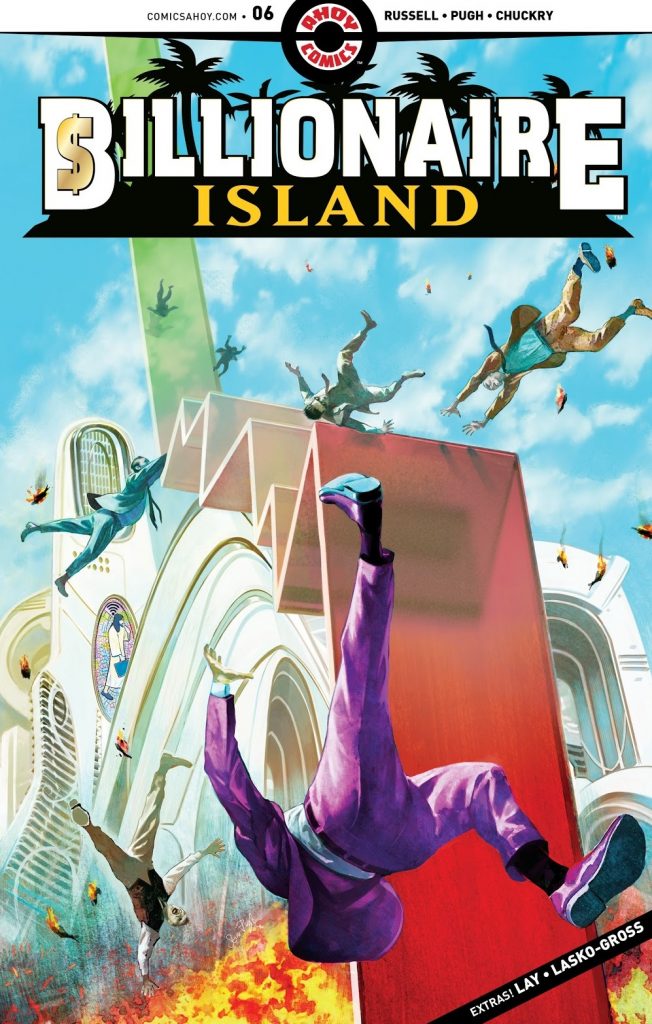 I was provided with a free copy of Billionaire Island Issue 6 for review. The opinions I have shared are my own.

Writer Mark Russell gave an enjoyable finale to his six-part series Billionaire Island. I liked how the main billionaires tried to save their fortune after Shelly, Trent, and the other survivors shared their story with the public. The fact that certain people refused to accept actual (science-based) proof hit too close to home considering what the world’s going through right now.

While I could have done without the (kind of) happy ending, I have to say that I still greatly enjoyed reading Russell’s story. 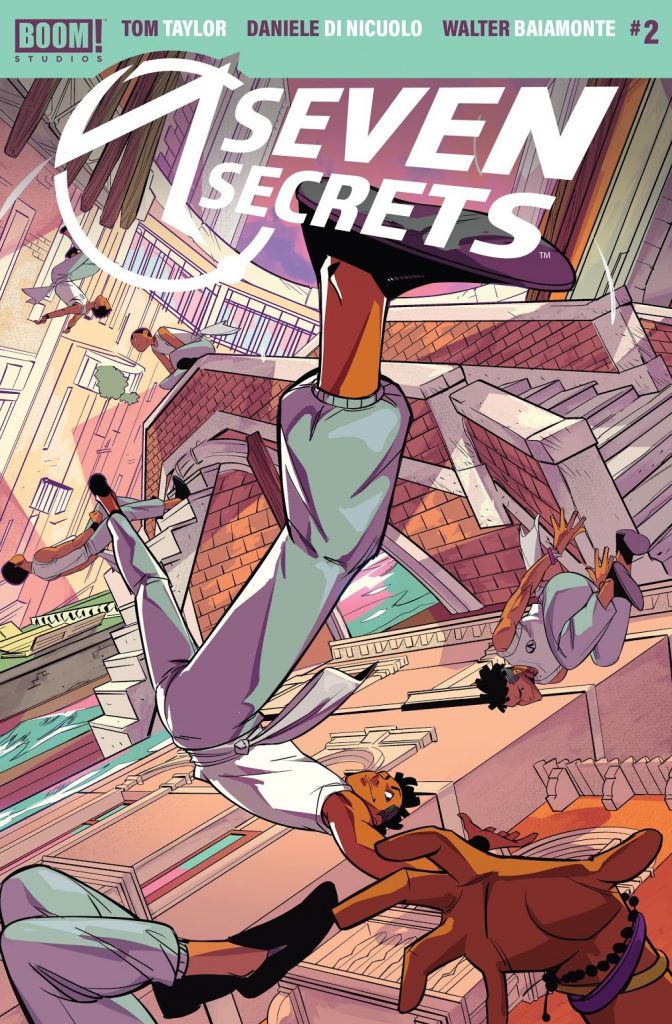 For me, two issues in and reading the Seven Secrets comic book series from writer Tom Taylor has been like watching a TV series or a film. I can see all of the panels being easily translated into some kind of live-action adaptation.

Seven Secrets issue 2 gave us Caspar’s backstory and how he grew up under the tutelage of ‘The Order of the Seven Secrets’. The panels showing Caspar creating a bond with his birth parents were quite emotional, especially because of what happened in the debut issue. I guess it’s time for Caspar to get his revenge. 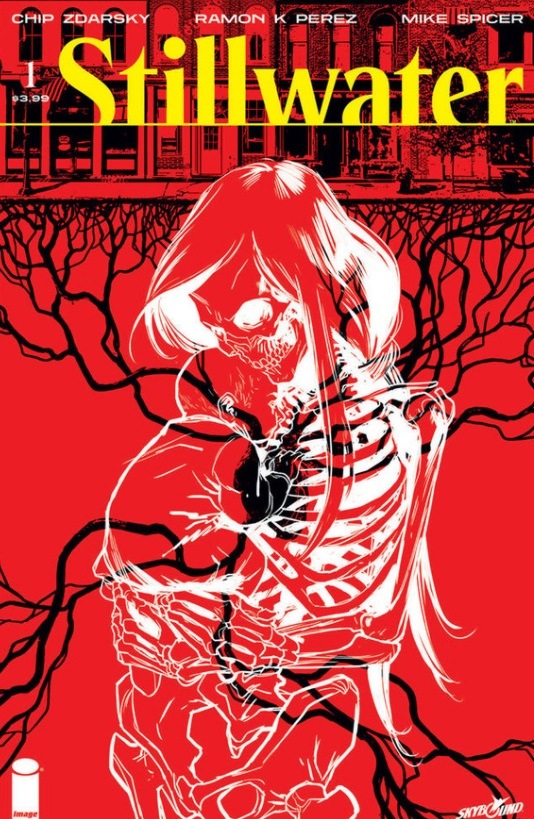 Stillwater issue 1 by writer Chip Zdarsky (The White Trees) was definitely quite disturbing. I’ll give it that. Even though I didn’t like what happened to Daniel’s friend (maybe he will be okay?), I’m intrigued about what the next issue will hold. It’s about a creepy town where people don’t die even after fatal events. That’s an interesting premise; however, when it comes to stories similar to Stillwater, there’s a risk of quality plummeting as it continues. So, I’m not entirely on board yet.

Which comics did you pick up this week? Did you read Batman issue 99? What did you of Storm’s story?

Previous:The BTS Effect: I Get it Now and You Should Too