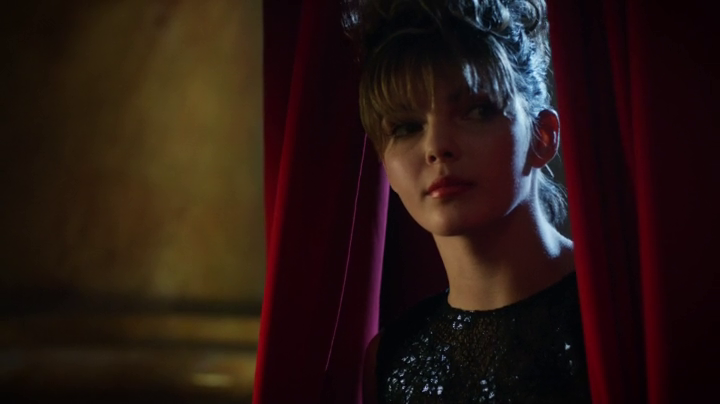 This week’s episode of Gotham gave me two things I enjoy about the show very much: more crazy bisexual Barbara, and Baby Bruce and Kitty Selina interactions. It also presented the audience with a very surprising twist at the end. The fate of the city is still up in the air, and I love it!

Jerome’s madness continued this week as he, Barbara, and the Galavan siblings initiated their next plan of action. Now, I know some of you might be wondering why a fundraiser for a Children’s Hospital was being held after the tragic recent events. I found it a bit hard to believe myself, but it’s a TV show and the writers need to move the story forward.

The best part of the fundraiser was Baby Bruce (David Mazouz) and Kitty Selina (Camren Bicondova) meeting each other. It’s been some months since the two talked, and their interaction was awkward and cute as usual. When Jerome started killing people, it was Kitty Selina who saved Baby Bruce, and he even told her he missed her. While the Batman-to-be didn’t run away from danger with her, as soon as she got out, Kitty Selina ended up showing the route she came through to Gordon (Ben McKenzie) who then used it to save everyone. Not only that, she went back afterwards to make sure Baby Bruce was safe. Talk about cute!

Another awkward and cute thing during the fundraiser was Alfred’s attempts to flirt with Leslie. According to Gotham canon, if you want to invite Leslie on a date, she can be easily persuaded by telling her you know about a great chef who’ll cook dinner for her. 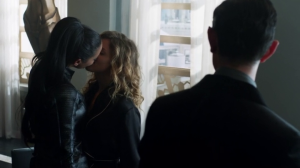 Coming to my current favorite character on the show, Barbara (Erin Richards), she acted quite Harley Quinn-like during the episode. I knew she had a manipulative personality and seeing her side with Theo to take down Jerome was something her character would definitely do. Her relationship with the Galavan siblings also hinted at a possible sibling rivalry, and I think Barbara will be play the evil brother and sister against each other in the near future.

It was obvious from the start that Jerome wasn’t the real Joker, but seeing him die so soon was a surprise to me. Jerome was a breath of fresh air in Gotham, and I liked him terrorizing the citizens. Even though he is dead, his legacy will live on, and judging by what they showed at the end of the episode, he probably triggered the creation of the ‘real’ Joker in Gotham.

If the philosophy behind the madness of the Joker is taken under consideration, I think the writers are trying to use it to form a cult of crazed devotees in Gotham. It is very likely that the real Joker won’t be showing up anytime soon in this pre-Batman story, but characters similar to him will likely pop up now and again in the series like Jerome did.

With not-the-real-Joker gone, I’m looking forward to how Maniax will continue terrorizing the public. Theo is a great mastermind, but he doesn’t come across as threatening as Jerome did. Will Barbara take Jerome’s place now that he’s dead or will she play her own game?

What did you think of this week’s episode of Gotham? Did you enjoy “The Last Laugh”? Let us know!

Previous:Doctor Who 9×3 Review: Under The Lake
Next: Fear the Walking Dead 1×6 Review: The Good Man