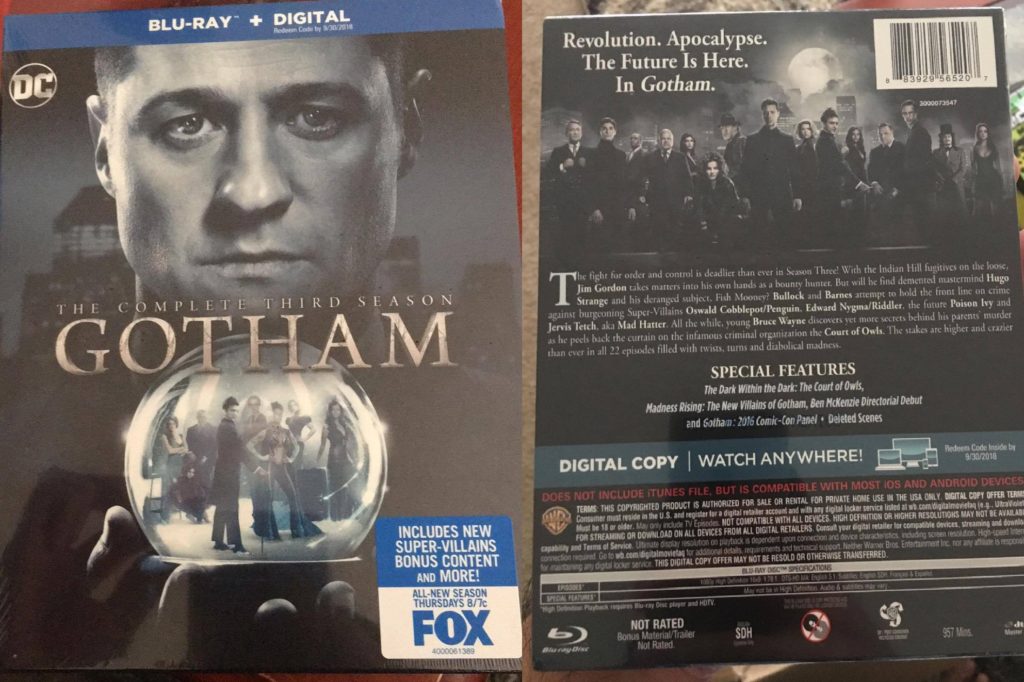 With the premiere of Gotham Season 4 this September, you can go ahead and binge-watch the complete Gotham Season 3 and extra features on Blu-ray and DVD!

Warner Bros. Home Entertainment provided me with a free copy of the Blu-ray I reviewed in this Blog Post. The opinions I share are my own

As a fan of this DC Comics based show, I enjoyed the third season even though it had some faults. Gotham Season 3 was all about the rise of heroes and villains, shaping the future of the city.

“With the Indian Hill fugitives on the loose, Jim Gordon takes matters into his own hands as a bounty hunter in order to save the city that he loves, but will he accomplish his mission to find deranged mastermind Hugo Strange and Fish Mooney, one of Strange’s villainous subjects? While Gordon plays bounty hunter, Gotham City Police Department’s Bullock and Barnes remain on the frontline in Gotham, fighting against crime and destruction in the monster-ridden city. The city seems to be descending further and further into chaos and darkness as burgeoning DC Super-Villains Penguin, Edward Nygma/The Riddler and more are joined by the future Poison Ivy, now transformed into a young woman who’s harnessed the full power of her charms, and Jervis Tetch aka Mad Hatter, a. talented hypnotist teetering on the edge of madness. All the while, a young Bruce Wayne discovers that there are still more secrets behind his parents’ murder as he peels back the curtain on the infamous criminal organization known as the Court of Owls.”

It is based on the characters from DC and produced by Warner Bros. Television. Gotham was developed by Bruno Heller (The Mentalist, Rome), who executive produces with Danny Cannon (Nikita, CSI), John Stephens (Gilmore Girls, Gossip Girl) and Ken Woodruff (The Mentalist, Shark).

Gotham Season 3 was all about change. We saw Edward transform into the Riddler and Barbara rose in rank. The most shocking development was the confirmation that Penguin loved Nygma in a romantic manner. While Nygmobblepot had a lot of issues, it was still nice to see the show changing two iconic characters from the Batman lore in such a manner. 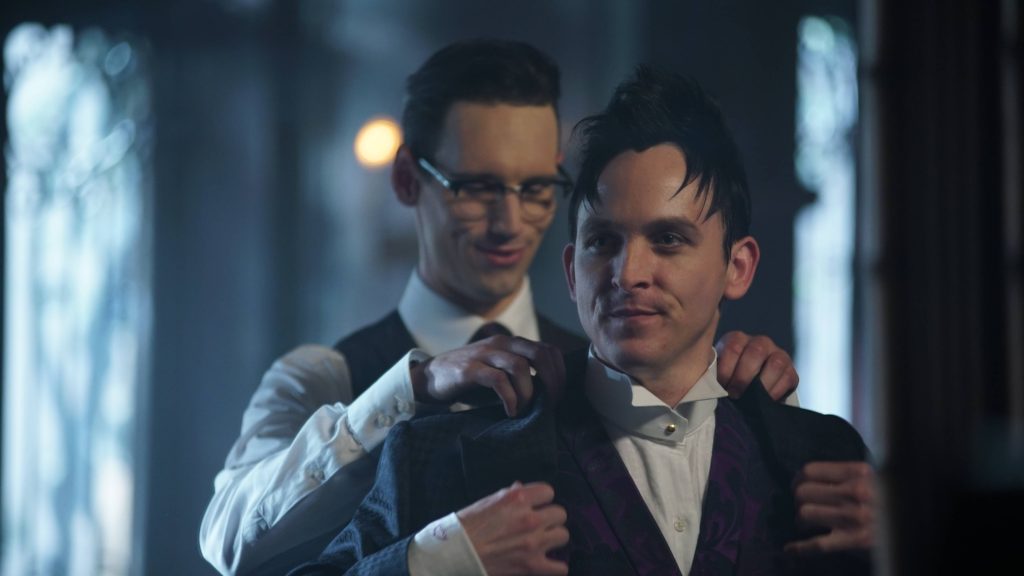 I’ve reviewed the entire third season so feel free to read my thoughts. One storyline I have no interest in, and probably still won’t have during season 4 either, is the ‘dark-Lee-after-Jim’ arc. I just don’t care enough about Lee and Jim Gordon compared to the other characters on this enjoyable show.

The Blu-ray release of Gotham: The Complete Third Season has all 22 episodes on a 4-disc set. It also has extra features and a Digital HD version to offer value for the price tag. The front has the main artwork while the back has the season’s summary with some images and details about the extra features.

The video is presented in 1080p High-Definition 16×9 Widescreen (1.78:1). The video quality is great and even the darkest of scenes appear clear. The audio quality is English DTS-HD Master Audio 5.1, which prevents from encountering any issues with sound.

Disc 3 has episodes 13 to 18 with deleted scenes from episode 13, 15, and 18. Disc 4 has episodes 19 to 22 with a deleted scene from episode 21. It also includes ‘The Dark Within the Dark: The Court of Owls’ Special Feature (talking about the group’s motives), the ‘Gotham: 2016 Comic-Con Panel,’ and the ‘Ben McKenzie Directorial Debut’ Special Feature (talking about Ben McKenzie’s directorial debut ‘These Delicate and Dark Obsessions).

The extra feature offers fun content for fans. While the deleted scenes don’t add anything to the plot they’re still enjoyable. Warner Bros. Home Entertainment should consider adding cast and crew episode commentary in every home release. Hearing what the people involved think about certain episodes helps to increase the rewatch value.

Are you a fan of Gotham? Are you looking forward to watching Season 4 on September 21, 2017? Let us know!