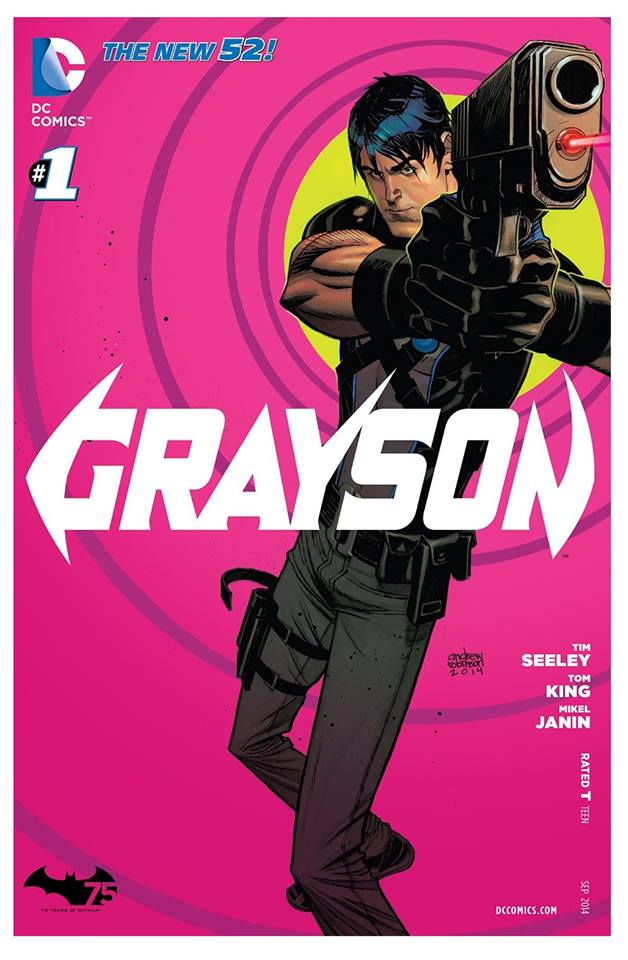 As a life-long Dick Grayson fan, I was very disappointed to hear that DC may finally kill him off. Let’s just say, when DC “killed” Batman, I quit comics for several years. DC redeemed themselves in my eyes with the introduction of the New 52, and restarting the Nightwing comic. I was ready to jump ship once again when I heard of the impending doom for Nightwing. Much to my relief, when Nightwing ended, there was another comic to take its place: Grayson. However, I was still wary. Could I be interested in a comic that features Grayson no longer donning the Nightwing costume? Could I handle a Dick Grayson so disconnected from the rest of the Bat-Family? The answer after reading the first four issues was a resounding yes.

I had a hesitance going in to Grayson. I was subscribed to the comic, but I had left the issues in the heavy duty cardboard envelopes they arrived in for months. I was worried that an international spy comic, even if he was Dick Grayson, would not appeal to me. I always enjoyed Nightwing, and even when Dick Grayson was Batman, but I had my concerns that putting Grayson in this situation would be just too different. I did not want to feel disconnected when it came to my all-time favorite comic book character. This past week, I finally decided to give Grayson a read. I was not disappointed.

Grayson is written by Tim Seeley and Tom King. The latter was a former member of the CIA. We have no idea if any of the adventures Dick gets up to were influenced by his life. I’m sure if they were, King would not be able to tell us! All of the covers have a very classic secret agent/spy movie feel to them. The artist for the comic book itself is Mikel Janin. He does not forget that Dick Grayson has one of the nicest butts in all of the DC Universe. The comic is well drawn, and for those who are a fan of Grayson’s physique, he spends nearly all of issue #4 in tight pants, sans shirt.

After Dick Grayson’s “death,” he goes undercover for Batman at a spy agency called Spyral. There are very few people who know that Dick Grayson is in fact alive. Spyral has a way for Grayson to get around without being able to be recognized face to face or by camera or video. This is beneficial not only for his job for Spyral, but to also hide the fact that Grayson isn’t dead. Dick does have very limited contact with Bruce Wayne over a secure line. Most of his conversations with Bruce, when not about Spyral business, are very heart breaking. He asks about Alfred and he asks about Tim Drake. He asks if Bruce remembers things from their past – the happy memories. Basically, it breaks this Bat-Family loving girl’s heart.

Tim Seeley and Tom King stay true to Dick Grayson’s roots. You’ll see multiple references to Grayson being a trapezist who came from the circus. They continue to give Dick the personality we remember: Someone who enjoys having fun, but not without his own hurts. This line was very classic Dick Grayson: “The problem with spies is that you’re not fun. You should try fun, it’s really a lot of fun.” (Issue #3).

After reading the first four issues of Grayson, all of my reservations have been put aside. These new writers for the book do not forget who Dick Grayson is. His personality is still the same and I’m very much enjoying seeing his new adventures as an international spy. I’m definitely keeping this comic on my read list.