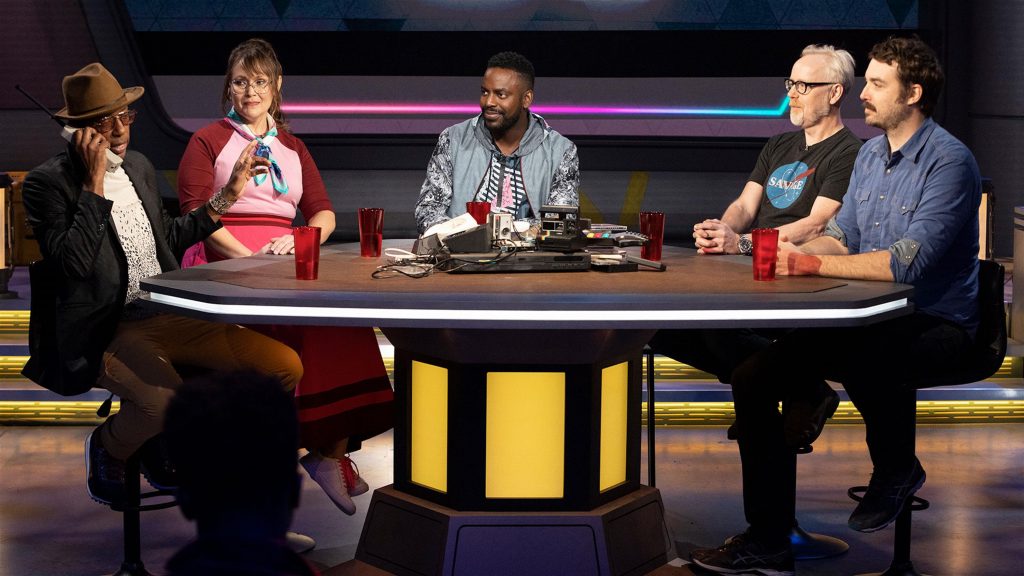 Baron Vaughn hosted SYFY’s The Great Debate at Comic Con. He did such an awesome job that he’s heading up the new series, complete with a spaceship-like set, a robot sidekick, and a horde of geeky favorites as guests.

Baron Vaughn is a comedian known for his role as Tom Servo on Mystery Science Theater 300: The Return, as well as a ton of roles on popular shows like Grace and Frankie and BoJack Horseman. The Great Debate has been a fun place to find random geeky celebrities at Con, so when we heard it was getting a SYFY series with Vaughn in the host’s chair I was excited to see how things would go.

So far it seems to be on the road to establishing itself as a SYFY mainstay. There are 12 episodes already ordered, hopefully with more to come. We scored some time to ask Vaughn how the show works and where he sees it going (and yes, we asked about the comics- but you’re not going to like the answer).

The Geekiary: For you, how is doing the show for a television audience different from hosting it at conventions?

Baron Vaughn: Well, I only got to host The Great Debate once at a convention, and I had nerves a plenty! The same kind of nerves that I had when I stepped into the role of Tom Servo for MST3K. I was in front of group of people who did not necessarily know me, scared that they weren’t going to trust me, scared that they weren’t going to like me – all those different feelings.

But, when I looked at the panelists and the people who were behind the show, I thought, “You know, it’s going to be fine because all of these people have got my back. Like I’ve got their back, they’ve got mine.” So, that felt good.

When doing the TV show, it surprisingly takes less time – at least when we’re rolling. At the Cons, it’s a one-time event, and there’s a lot of prep, but it seems like timing is more flexible. Obviously, there’s a set end time in mind, but you’ve got to let people talk, especially if they’re on a roll cracking people up. With TV, there was so much we had to edit out for it to fit into the episode.

In that way, it’s always going to feel super crisp and without any lulls, not that that was happening during the lives shows. But the TV show is going to have a momentum, look and feel that is reminiscent of the live shows while being its own thing. I think that fans who have been following The Great Debate at the Cons or online for years will be very happy.

The Geekiary: DB-8’s voice sounds familiar. We don’t see her voice actor in the promo materials or on IMDB – who’s behind the bot?

Baron Vaughn: The voice of DB-8 is a fantastic comedian and writer, Danielle Radford. I’ve personally known Danielle for several years. I met her in Seattle when I did standup – well, I still do standup – but when we used to be able to do standup for real. I met her there way back then while doing shows, and I thought she was great and funny. She moved to LA, I’d see her around, we became friends.

Luckily, she’s also close to a lot of the other creatives behind the show and came on board. She had a hand in structuring the format, pitching topics and figuring out phrasing. She’s very funny on her toes and has that kind of sarcastic voice that’s somehow “I hate you, but I love you” at the exact same time. We thought that would be really fun for AI, similar to what Phoebe Waller-Bridge did in “Solo.”

So, Danielle Radford. Please look her up, follow her, and support all of her work, forever and ever, amen.

The Geekiary: In a few games, such as the cosplay game, it seems like the players came prepared with their answers. How much prep time do contestants have for the show? Do they know all the categories beforehand, or just a few?

Baron Vaughn: Every panelist that came onto the show knew exactly what they were getting into. There was plenty of time for them to prep and think about what they were going to talk about. Although, I must say I don’t think a lot of the contestants needed that much prep because they already know so much about these things anyway. But the prep time allowed them to collaborate with us on how things might go and points being made.

All that being said, spontaneity is key on a show like this. Everyone was prepped but there was so much improvisation, and nobody knew what anyone else was going to say, what they were going to do. We had to drop a few surprises and gems just to see how people would react here and there! We wanted to make sure we caught them off guard occasionally so complications could ensue.

The Geekiary: Do you have a favorite episode so far?

Baron Vaughn: It’s hard to pick favorites – I would rather answer the question, “Do I have a favorite season?” And I do. It’s the one that we just did that you’re about to see.

The Geekiary: In Episode 2 we see some first-appearance comics being torn up by panelists. Those… those were props, right?

Baron Vaughn: I can neither confirm nor deny that allegation. I plead the Fifth on the grounds that I might incriminate myself.

The Geekiary: SYFY picked up 12 episodes of The Great Debate. Have they talked to you about a possible second season yet, or whether you might keep doing shows when conventions start back up?

Baron Vaughn: We haven’t had those conversations just yet, but it’d be great to keep The Great Debate going!

The Geekiary: Did an argument on the show ever change your mind about something?

Baron Vaughn: Definitely. The thing about that is, they say that sometimes things that make you laugh go into your long-term memory. It can really help soften a bitter pill. A lot of my favorite critics of society are comedians – people like Dave Chappelle, Chris Rock, and Jon Stewart. All these people can not only speak intelligently and synthesize what’s going in the world, but they also make me, and others, laugh while doing it. That’s why a lot of us remember the things they say, because they put it in succinct and perfect joke form.

In a similar way, because we were surrounded by hilariously brilliant people on this show, sometimes the panelists would put things in a way that I had not considered. If it made me laugh, I would often reconsider what I thought before I heard what they said. It’s now hard to think of what those things might be because when my mind gets changed on something, it’s almost as if that’s how it’s always been.

The Geekiary: Off-topic but very important — you’ve gotten to voice a Ninja Turtle [Donatello in the 2019 Batman Vs Teenage Mutant Ninja Turtles]. What superhero character would you love to play in a live-action series or movie?

Baron Vaughn: That’s a very easy question! I would love to play John Stewart. Not the host of The Daily Show, the Green Lantern John Stewart. Personally, I think that the world and the mythology of the Green Lantern hasn’t really gotten its due. I was very excited for the Ryan Reynolds movie, as were many people. But of course, it ended up being… what’s the word I’m looking for… horrible.

But that doesn’t mean that property or the idea of Green Lantern is horrible. It just means that somebody hasn’t figured out how to do it well yet, and I think that if anything, we should let go of the whole Hal Jordan story and go with the John Stewart story – he’s such an interesting character. I’ve always loved the Green Lantern, so I’d love to see that pulled off better and I’d love to be a part of it.

The Geekiary: What are you watching and reading right now for your own entertainment, not work?

Baron Vaughn: I guess in a way, anything that I’m watching and reading ends up being for work. Because anything that I’m watching and reading is bringing me some kind of knowledge that I didn’t have before. Sometimes when you watch and read for pleasure, years later it could end up being something that applies to work you might be doing. So, to always be taking in information is important.

To be more specific about your question, I’ve been watching a lot of documentaries lately, especially about different kinds of artists that I love. I think that it’s always valuable to learn about the life and decisions of somebody who does something unlike what you do. So, I watched a documentary about Miles Davis, one of my favorite jazz musicians, and I watched a documentary about August Wilson, one of my favorite playwrights.

I’ve also been watching The Expanse, which I cannot believe nobody told me about! I think some people actually did [Editor’s note: we certainly did] but it is a fantastic show. It started on SYFY and now is on Amazon. It’s still fantastic, it’s so well written. I haven’t watched all of it yet – I’m doing it little by little – but I really like it.

As for what I’m reading… I’m always reading a bunch of different things for a bunch of different reasons. I’ve been reading a lot of poetry lately and that’s because I feel like I don’t know much about it. There are poets that I know and that I like, but I’m trying to teach myself more about so I’m reading all kinds of poems. I have a book of Langston Hughes poems that I’ve been reading every now and then. It’s interesting to see what he had to say literally a hundred years ago that still applies to today.

Thanks to Baron Vaughn for his time! If you’re still undecided about The Great Debate, here’s what you’re in for:

Catch up on SYFY or watch new episodes on Thursdays at 11pm (that’s 10pm Central Time).