If you have been looking forward to watching Netflix’s new series Locke & Key, you might want to rethink offering your support. Turns out, one of the main leads (actor Griffin Gluck) has been acting quite racist and transphobic online. While he is yet to address his actions, his girlfriend Sabrina Carpenter has issued a statement.

Whether you are a fan of social media or not, I’m glad that it is a great place to find receipts of problematic behavior exhibited by a number of celebrities. Recently, I wrote about the racist content singer Camila Cabello showed on her Tumblr account. And now, we have another young performer doing the same (some would argue, his online past is worse).

So, according to certain people, 19-year-old actor Griffin Gluck is a racist, transphobic, sexist (and the list goes on) person. Now, I can kind of understand letting some things slide when people are in their early teens. However, some of the problematic stuff from Gluck isn’t too old.

Of course, I won’t be showing all of the content. It’s just too much and I rather not display it here. 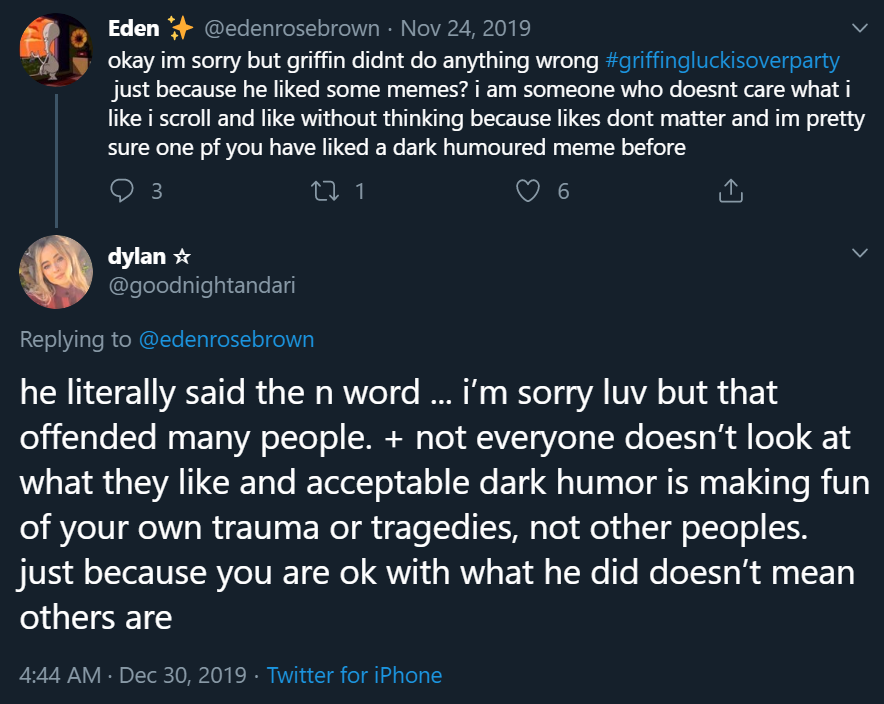 There’s just a whole lot, which some are defending as dark humor (eye roll).

i know it’s not a huge amount, but it’s definitely significant, and it’s disgusting. you stan a man that finds homophobia, transphobia, sexism and misogyny, ableism, stereotypes, things that are downright disgusting and etc. funny. y’all have been ignoring this too much. pic.twitter.com/Il3d2Ze3Rr

As of writing this, Gluck is yet to address the situation. What’s interesting is that his girlfriend (singer and actress Sabrina Carpenter) has issued a statement. It made sense for her to say something because her fans were wondering why she would continue being in a romantic relationship with such a man.

Here’s what she wrote!

Now, I don’t know about you, but her so-called statement came across as lip-service to me. She didn’t mention the reason people were complaining about Gluck to her. She also seemed to be blaming other people for blowing the entire thing out of proportion.

And yes, her line about allowing others to grow, while logical, can’t be applied to this situation because again, Gluck is yet to respond. How can someone grow without realizing their mistakes?

Also, how can Carpenter say she’s all about inclusivity while deliberately being in a romantic relationship with a man who is (apparantly) against all such things? Like, make it make sense, please.

I’m tired of certain people who preach about love and acceptance while supporting their racist and homophobic boyfriends (or others). As far as I’m concerned, if anyone is in a relationship with such a problematic person, that individual doesn’t really stand for inclusivity and acceptance all that much.

Carpenter’s statement is useless. It is, as far as I can tell, also filled with some lies. Saying she didn’t know Gluck during the time he exhibited such behavior online doesn’t hold because again, she was with him during that time.

YouTuber Angelika Oles shared a good take on this matter at the 8:23 mark. Do listen to what she said.

Now, an article did mention that some of the allegations against Gluck are false. And you know what? Some of the content could be fake. But having Carpenter share such a statement does make it very obvious that a part of Gluck’s online presence has been problematic. And again, Gluck hasn’t come out to address any of this.

Anyway, why am I letting you all know?

Well, I just wanted to bring the current situation with Griffin Gluck to your attention because, as I already mentioned, Gluck is one of the leads in Netflix’s upcoming Locke & Key series. It is scheduled to debut on February 7, 2020.

So, do with this information what you want, especially if you are someone looking forward to supporting the new show.