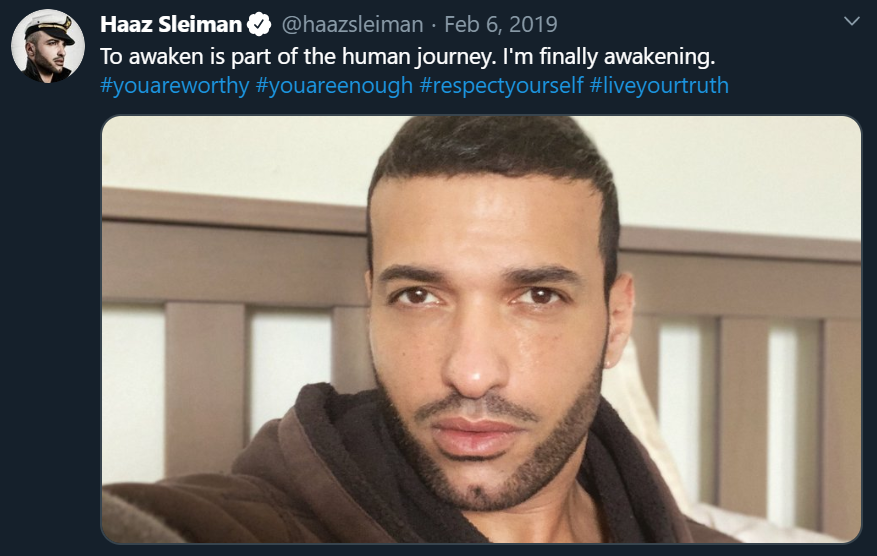 The Marvel Cinematic Universe has a very iffy track record when it comes to well-written (or any) queer representation even though the films have continued to use queer characters. However, it seems things might be changing for the better in The Eternals, with help from queer Muslim actor Haaz Sleiman.

I have already shared how tired I am waiting for the MCU to offer well-written queer representation instead of simply talking about it for years. I would have given them a pass, but when canonically queer characters are used in live-action films and there’s still no queer representation, I’m done.

The upcoming The Eternals movie has been getting press about featuring a character named Phastos (played by Brian Tyree Henry). According to what has been shared about said cosmic being, he’s an inventor who has a husband and a child. Actor Haaz Sleiman plays Phastos’ husband and he had some interesting stuff to share in a recent interview with NewNowNext.

When asked if The Eternals will have a gay kiss, Sleiman shared:

Oh, yeah, absolutely, and it’s a beautiful, very moving kiss. Everyone cried on set. For me it’s very important to show how loving and beautiful a queer family can be. Brian Tyree Henry is such a tremendous actor and brought so much beauty into this part, and at one point I saw a child in his eyes, and I think it’s important for the world to be reminded that we in the queer community were all children at one point. We forget that because we’re always depicted as sexual or rebellious. We forget to connect on that human part.

So, I guess the House of Mouse wasn’t lying about finally doing right by the queer community? I mean, of course, the kiss can likely be cut during the film’s theatrical run in certain countries. But as long as it doesn’t get edited out from the actual US release, I’ll take it.

I still remember how a scene showing Valkyrie’s bisexuality was edited out of the final version of Thor: Ragnarok. Fingers crossed, something similar doesn’t happen in The Eternals when it’s released on November 6, 2020, in the US.

On a side note, apparently, a queer Valkyrie will be shown in Thor: Love and Thunder.

While you all wait to see Sleiman in the upcoming MCU installment, you can go ahead and watch him in a very emotional queer role in Apple TV’s Little America. The series showcases the true stories of immigrants in the US. Sleiman is in the episode titled “The Son,” which shows the struggles of a closeted Syrian named Rafiq.

I urge you all to watch Little America. The series has already been greenlit for a second season. Also, Little America has been executive produced by Sleiman’s The Eternals co-star Kumail Nanjiani.

As for Sleiman, it’s great to see a queer Muslim being very open about himself. The way he lives his life is sure to inspire many around the globe.

Sleiman, who has an impressive resume, can also be seen as the lead in the queer film Breaking Fast. It has been described as a rom-com about a gay Muslim Arab living in West Hollywood.

In the NewNowNext interview, Sleiman shared:

I play Mo, the lead character, and I think it’s the first project that shows an openly gay practicing Muslim—a guy who respects and follows and is devoted to his religion but is still openly gay. It’s controversial because to some Muslims that will be offensive. All the more reason it should be made.

Breaking Fast will premiere this March. You can learn more about the project and buy a ticket here.

The world needs such stories to be told.