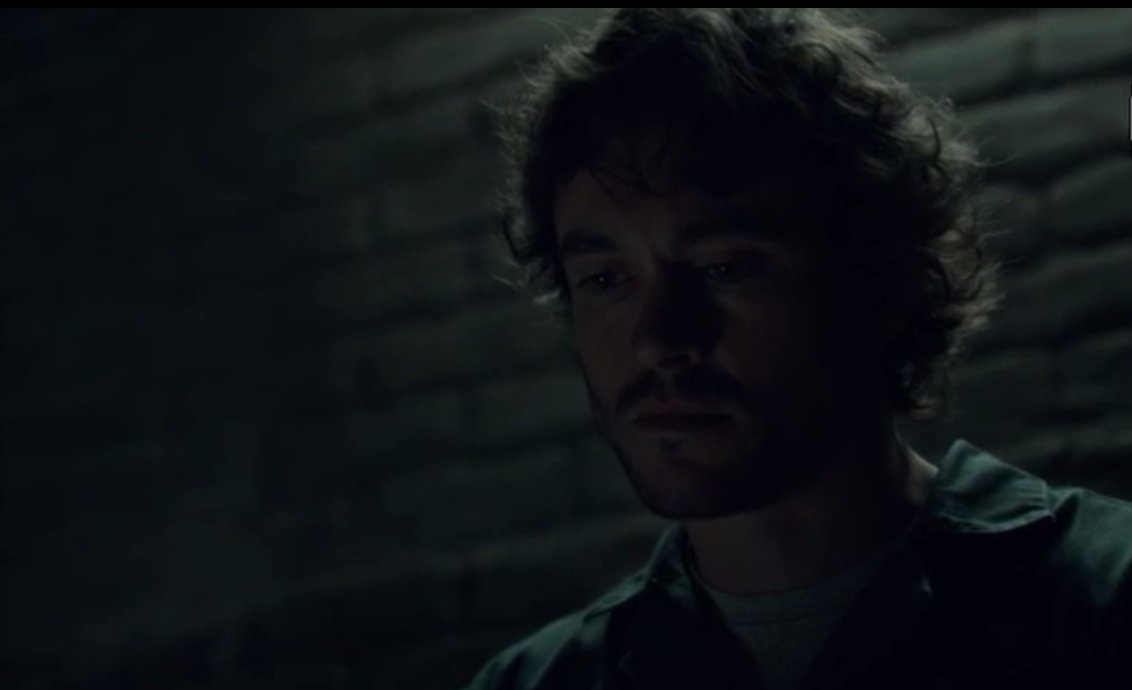 The Heateus (aka “hiatus”) has been long and grueling, but finally the moment Fannibals have been waiting for has come.  Hannibal has returned.  He’s had quite a lead up to the premiere with a brilliantly constructed trailer, the first two minutes released a few days ahead of the premiere, Mads Mikkelsen participating in a Q&A on Twitter (and briefly stopping by Tumblr, causing quite a panic), and Hugh Dancy hosting an AMA on Reddit.  Did the season 2 premiere live up to expectations?  Was all of the hype and build up worth it?  Absolutely.  Though there were some obstacles to overcome as far as narrative goes, this episode satisfied our cravings and left us wanting more.

Having the protagonist of the series behind bars has presented an interesting challenge.  His mobility is limited and he’s generally isolated from people, so how can you construct an exciting narrative surrounding him?  This has pushed Hannibal to the forefront, whereas before he was very much second to Will for screen time.  This show is one of the rare instances where the title character is not actually the protagonist.  Even rarer still, in this show the title character is the antagonist.  During the first season we followed Will Graham’s journey as he slowly unraveled Hannibal’s secret.  We were shown solitary Hannibal moments, but the narrative was very much Will Graham focused.  For the first half hour of this episode we only saw two brief glimpses of Will, while the rest was focused on Hannibal and his satisfaction at having gotten away with framing Will for murder.  Will’s presence was felt heavier in the back half of the episode, but it still felt like a reverse of the first season as far as point of view is concerned. 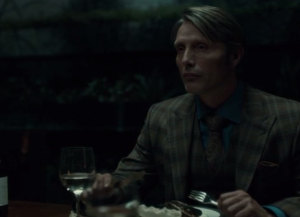 Speaking of satisfaction, we have the continued theme of Hannibal telling jokes that only Hannibal understands.  When Dr. Chilton reveals that Will Graham can’t stop talking about Hannibal, he jokes that Chilton is dining with “a serial killer.”  That smug little grin when he makes such an inappropriate joke is something I’ll never get over.   He’s so clever, but he’s the only one that truly appreciates his own humor as he’s the only one that really knows what’s going on.  It must be very lonely having so many one sided jokes.  Unfortunately when others are let in on these jokes there is less likely to be laughter and more likely to be nausea, anger, fear, and violence.  Poor Hannibal is much better off being an audience of one.  At this point his audience is in danger of growing, but that worry isn’t enough to stop him from telling truly awful jokes.

The show continues to push the envelope as far as levels of violence are concerned.  Will began to remember the whole ear incident and we saw something I never thought I’d see on television.  We were shown how Hannibal crammed that ear down Will’s throat.  It was grotesque and absurd, just how we Fannibals like it.  The bodies of the murderer were also grotesque to an extreme that is shocking on network TV.  Our first season had a totem poll of bodies and this season has a color wheel of bodies.   I’m continually surprised at the level of violence this show can get away with on network television.

The fact that we didn’t catch the killer at the end of the episode is also a departure from the first season’s narrative structure.  Out of twelve episodes we only had one antagonist whose arc lasted more than their introductory episode.  Abel Gideon spanned two, and even those were separated by several smaller cases before returning to his story.  Georgia Madchen also spanned two episodes, but her second episode merely highlighted her death and then moved on to the main story.  I’m hesitant to categorize Georgia as an “antagonist” anyway, because her killing was done out of confusion and mental illness, and she was merely a scapegoat for Hannibal for the most brutal murder that was attributed to her.  She hardly counts no matter how you look at it.  I’m personally a big fan of larger overarching plots, but I wonder how long they can sustain the main plot and secondary serial killer plot. 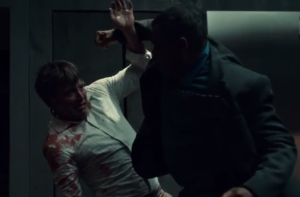 Another structural element that I’m questioning is the use of a non-linear narrative.  As I mentioned in my review of the first two minutes of the episode earlier this week, I’m not a fan of the device.  Showing us where the plot is going takes some of the steam out of the journey.  We know that Crawford is going to discover Hannibal’s true nature.  We know they’ll get in an epic brawl.  But there’s still a lot left as a mystery, so I’m putting my faith in showrunner, Bryan Fuller, to construct the journey in an interesting manner.  We don’t know how Crawford will find out or even when, though I strongly suspect the battle will actually occur much later in the season.  I’d put money on it being the last scene in the final episode.

Overall I was very pleased with this episode.  There were parts that concern me, but Bryan Fuller has never once let me down.  I’ll be eagerly looking forward to this show every week and I’m sure I’ll be severely upset when we head into the second Heateus.  For the next twelve weeks, though, I can look forward to Mads Mikkelsen, Hugh Dancy, Lawrence Fishburne, Hettienne Park, and the rest of the cast knocking it out of the park week after week.