Where the past two episodes of Helix have been frustrating on several levels, Aniqatiga sheds light on some of the show’s mysteries while presenting more questions.

So let’s be honest, that makes it the best episode since 274.

I mean, who hasn’t been wondering about the details of cold-hearted Hatake ‘adopting’ Daniel, the man now acting as his head of security? Or about why Hatake is so interested in Julia? While Aniqatiga didn’t answer these questions, it certainly shed more light on them – and that’s a good thing considering there are still seven more episodes this season.

One thing this show needs is more characters – real ones, not hallucinations – and at the very least we got that. While little Julia and Daniel’s apparent twin brother are likely no more than passing appearances, Anana was a breath of fresh air – despite the fact that she rescued the annoyingly and obviously evil Balleseros – because she also brought up the fact that over thirty children had disappeared since Arctic Biosystems showed up in the area, one of whom was her brother. 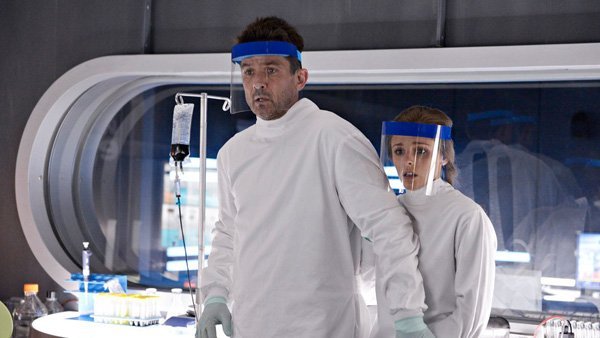 Back at the research center, the proof was in the pudding that Sarah’s test to determine who did and did not have the virus wasn’t legit, yet this was largely ignored. Instead, Alan and Daniel were concerned with Sarah helping the infected doctor kill herself – though this did lead them to do some more tests and lo and behold discover the same thing my beloved Doreen (may she rest in peace) discovered some time ago. From there Alan and Sarah decided to break into Level R – which made for a good bit of action, at least. Unfortunately, the predictable and honestly weak ‘romance’ between them was also realized. While it’s not a development that is interesting to me, it would have behooved Helix to wait at least a few more episodes to take it to this level.

However, we also got to see Hatake’s interest in Julia realized when he injected her with some sort of sedative or serum that turned her eyes silver like his. This – along with Anana’s story about the abducted children and the realization that one of those was her brother’s twin, who we know as Daniel – is what I mean when I say that Aniqatiga shed some light on the show’s mysteries while presenting more questions.

I think that viewers can only hope that Helix continues to give us more episodes like this one, even with its flaws.

Previous:Teen Wolf 3×18 Review: Riddled
Next: Teasing Major Character Death: Is It Worth It?