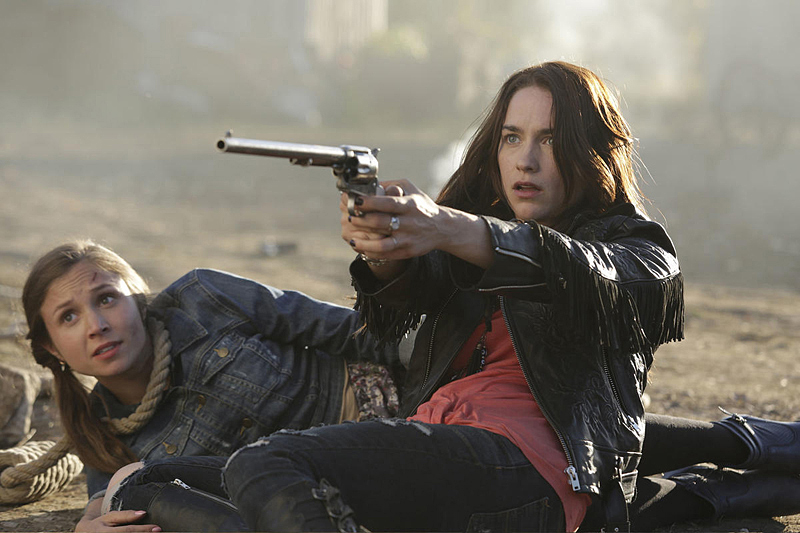 As any huge TV fan will tell you, having the ability to watch your fave show on Netflix just isn’t enough. What if your internet goes down? What if you want behind-the-scenes footage? Sometimes only that Blu-Ray will get you through. Fortunately, Wynonna Earp fans can make their season one Blu-Ray dreams come true by crowdfunding the project…and getting some amazing perks out of the deal.

IDW Entertainment, the company that launched the fan favorite Wynonna Earp, started the campaign on Indiegogo with an initial goal of $50,000 to make it happen. Not only will the Blu-Ray include all 13 episodes of season one, but will feature cast interviews and behind-the-scenes content. As someone who has sat down and talked to the cast, let me say, you are going to want all the extra goodness you can get your hands on. (And maybe some extra #WayHaught fantasy sequence if we are lucky?)

As with most successful crowdfunding projects, this Indiegogo campaign has some incredible perks depending on your level of donation, and we are not just talking getting your own copy of the Blu-Ray (which of course, you will!). Other perks include copies of the comic book on which the television show was based, autographed photos, personalized videos from members of the cast, and even a chance to have your likeness featured as a villain in the comic book! For those making the annual trek to San Diego Comic-Con, there are even perks that include passes to the Wynonna Earp party and lunch with the cast in San Diego.

Perks for the campaign start at just $30 US, and the anticipated arrival for the Blu-Ray discs will be September 2017. That will give you plenty of time to watch the entire season two which starts on June 9 on Syfy. (And you will get plenty of SDCC goodness this summer as well.) I want to be sure to mention that donating to the Indiegogo campaign is the only way you will be able to get your hands on the season one Blu-Ray, so be sure to donate ASAP! You can contribute and learn all about the campaign by heading to Indiegogo or click below. Good luck!

Previous:Boruto: Naruto Next Generations 1×8 Review: The Dream’s Revelation
Next: That Cool Spider-Drone From “Spider-Man: Homecoming” Can Be Yours!