“Illuminae”: For When You Want to Be Blown Away by a Book 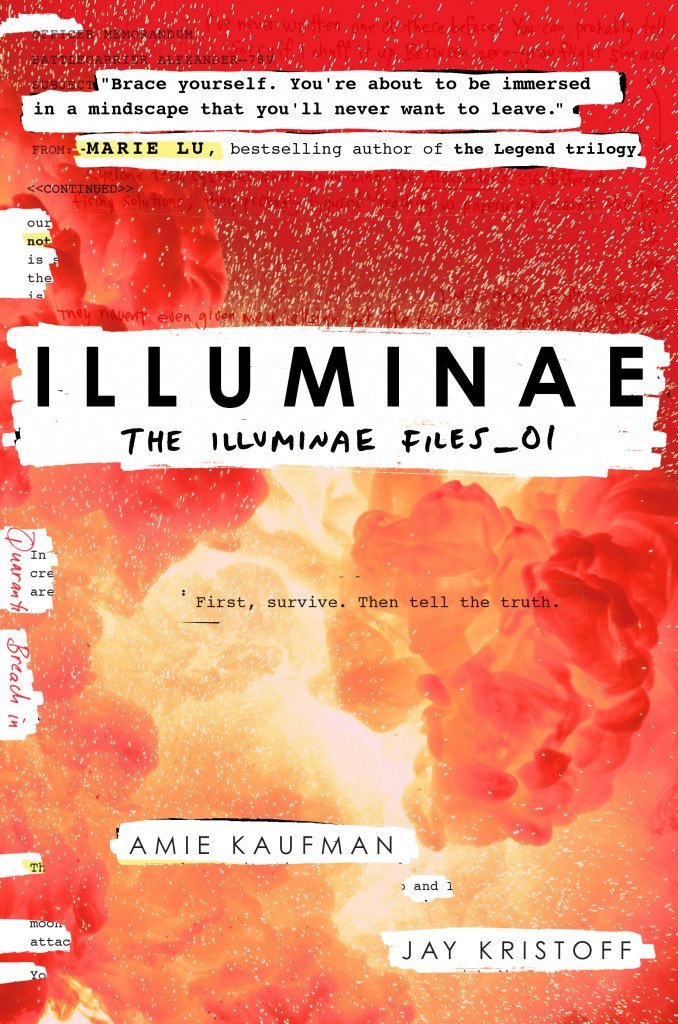 Illuminae by Amie Kaufman and Jay Kristoff, is about the invasion of an illegal mining operation that results in the deaths of thousands of civilians. Two rival mining companies are at war, and one is willing to use biological weapons in order to completely wipe the lone outpost out of existence. After the attack, the damaged ships limp through space seeking help. Newly broken up Kady and Ezra are able to escape the devastation but are then stuck on separate ships and forcibly conscripted into the military. The story is really about two things: the mystery surrounding the attack and the strange virus unleashed during it, and the relationship between Kady and Ezra.

I’m a big fan of epistolary novels. I have no idea when this love affair with that format started, but if I had to wager a guess I’d say it was sometime during college, when I had to read Evelina for a class. It’s a format that many people don’t particularly care for, but a lot of popular books utilize it (like The Princess Diaries – Meg Cabot uses this literary device a lot). Illuminae takes the epistolary novel to a whole new level. Honestly, I would recommend this book based on the format alone. I picked up an ARC at the BookExpo this past May, and oh my stars, it is probably one of the most creatively put-together books I have ever read.

Let me tell you something about me and the BookExpo. I usually don’t know very much about the books I pick up. They put out the list of titles every year, and I painstakingly read through every single summary and mark down the ones that sound interesting. Occasionally I will note a book by an author I like (or even just one I recognize), and I usually prioritize that way. I’m not that familiar with Jay Kristoff, but Amie Kaufman is half of the writing pair that writes the Starbound Trilogy, which I love. Illuminae piqued my interest first because of Amie and second because it takes place in space, and there is far too little science-fiction in YA books.

Illuminae is made to look like a dossier. It’s a collection of various documents – interview transcripts, journal entries, chat logs, even ship schematics – chronicling the attack and ensuing flight into deep space. The attention to detail is incredible. Reading this was an experience. Despite its thickness (it’s over 600 pages), I completely devoured it. I read it in about two days because I simply could not put it down. The ARC is really a thing of beauty, as I’m sure the published book is as well, but there was something amazing about checking the inside flap of the ARC (most ARCs are paperbacks – a hardcover is rare) and reading about how you were deemed worthy enough to receive a copy of the dossier in advance.

Okay, but enough gushing about the format, because as fantastic as it was, I wouldn’t have read a 600+ page book just because it was pretty. Illuminae has a really great story as well, with some pretty fascinating characters and relationships. Kady can come across as very “chosen one”, a trope way too overdone in YA literature, but in this context I feel it’s more that she’s incredibly skilled and a lot of people died in the attack. Ezra, while not being her polar opposite, is different enough that there are clear tone and language differences between the two of them.

Sometimes, love stories – especially in YA novels – can detract from the plot. They feel stuck in there out of obligation more than anything else. Kady and Ezra’s relationship, however, manages to propel the story forward, because Illuminae is really about the search for answers, and a lot of those questions are raised by Ezra and Kady keeping tabs on each other. Still, it’s just an afterthought to finding out what is really going on. That is the true story, and that is the story that’s so compelling. You will become absorbed as Kady tries to uncover the truth and just finds more questions.

I cannot recommend this book enough. I’ll be waiting for the sequel with bated breath.

Illuminae by Amie Kaufman and Jay Kristoff is published by Knopf Books for Young Readers and currently available wherever books are sold.