Heroes Get Ready to Fight an Alien Invasion in Mega Crossover Kicking Off on The CW on Monday! 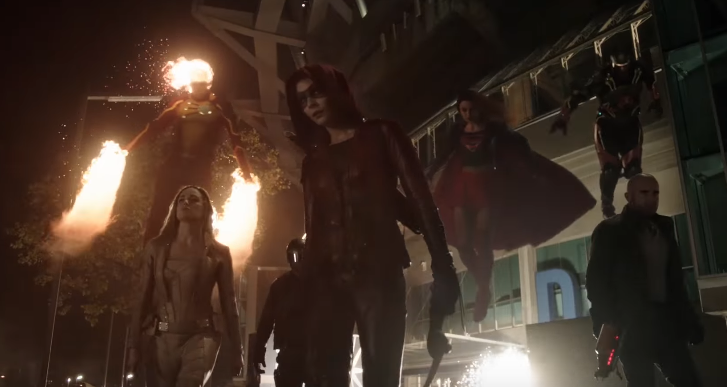 A new promo for the DC TV universe mega crossover shows some interesting character interactions and heroes getting ready to take on an alien invasion!

While the promo shows Flash telling Arrow about aliens, and Felicity’s hilarious reaction, my favorite scene is between Supergirl and Heatwave. The two verbally spar with each other, and I love that Supergirl won’t take insults against her name. Also, Kara can take them all out in a second so the rest of the heroes better stay in their lanes.

The upcoming mega crossover, titled “Invasion”, feels like traditional comic book crossovers with the event spanning four nights and four shows. The event includes Arrow, The Flash, DC’s Legends of Tomorrow, and Supergirl. You can also see Vixen, Cisco, and Speedy in the promo.

The plot deals with an alien race called the Dominators invading Earth because they see metahumans as a threat. Flash, Supergirl, Arrow, and the Legends of Tomorrow, along with their friends, will need to team up to fight the massive threat.

It is based on a comic book series of the same name. In the series, the Dominators partnered with other alien races to destroy metahumans. However, the Dominators had a hidden agenda; they wanted to control the metagene and create an army for total universal domination. While the heroes were able to defeat the invasion, a Gene Bomb detonated and created more metahumans on Earth. Let’s see how much of the comic book plot we’ll get to see in the DC TV mega crossover.

The event debuts in Supergirl on Monday, 28th November at 8 pm ET/PT on The CW. It will be followed by The Flash on Tuesday at 8 pm ET/PT. The story will continue in Arrow on Wednesday in the same timeslot. The conclusion will occur in DC’s Legends of Tomorrow on Thursday at 8 pm ET/PT.

Are you excited for the crossover? Let us know!

Previous:“New Mutants” Will Reportedly Fight Demon Bear in Upcoming Film!
Next: Netflix Gilmore Girls Has Its Moments, But Leaves a Lot To Be Desired