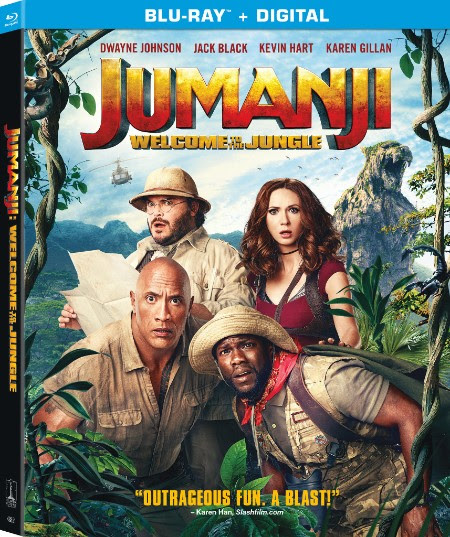 Sony Pictures Home Entertainment will be releasing Jumanji: Welcome to the Jungle 4K Ultra HD, Blu-ray, and DVD copies on March 20, 2018. The movie will be available on Digital on March 6, 2018.

Jumanji: Welcome to the Jungle ended up being a surprise box office hit. The Dwayne Johnson-led movie took the lore from the classic Jumanji film and expanded it for both new and old fans to enjoy. Now, on March 20, 2018, you’ll be able to own Jumanji: Welcome to the Jungle 4K Ultra HD, Blu-ray, and DVD copies. The film will also be available on digital on March 6, 2018. The upcoming releases include bonus content.

For the first time ever, the home entertainment packaging will feature a Snapchat Snapcode which allows you to unlock an augmented reality experience. After picking up a copy of the film on Blu-ray or DVD you can scan the Snapcode with the Snapchat app and see “the jungle brought to life” in front of you. After that, you can record your AR experience and share it with your friends.

Furthermore, an additional Snapcode will be present on an insert inside the package. This Snapcode will be exclusively for customers who purchase the disc. It’ll trigger a second “first-of-its-kind AR experience that will bring the characters from Jumanji into your living room.”

I don’t know about you, but the inclusion of such Snapcodes does sound very interesting to me. I won’t be surprised if it becomes a normal thing with Blu-ray and DVD releases to help get more sales and offer a more interactive experience.

Coming to the bonus materials, there’s a gag reel, a music video, and three behind-the-scenes featurettes. The Blu-ray and digital releases will feature two additional exclusive featurettes including “Surviving the Jungle: Spectacular Stunts!” which offers a look at the conception and execution of the stunts in the film, and “Book to Board Game to Big Screen & Beyond! Celebrating The Legacy of Jumanji” which shows the cast and filmmakers reflecting on the beloved original 1995 film and how Jumanji: Welcome to the Jungle honors the original’s exciting history.

When four high-school kids discover an old video game console with a game they’ve never heard of–Jumanji–they are immediately drawn into the game’s jungle setting, literally becoming the avatars they chose: gamer Spencer becomes a brawny adventurer (Dwayne Johnson); football jock Fridge loses (in his words) “the top two feet of his body” and becomes an Einstein (Kevin Hart); popular girl Bethany becomes a middle-aged male professor (Jack Black); and wallflower Martha becomes a badass warrior (Karen Gillan). What they discover is that you don’t just play Jumanji–you must survive it. To beat the game and return to the real world, they’ll have to go on the most dangerous adventure of their lives, discover what Alan Parrish left 20 years ago, and change the way they think about themselves–or they’ll be stuck in the game forever …

The Blu-ray and Digital Bonus Materials Include:

The DVD Bonus Materials Include:

With an approximately $100 million budget, Jumanji: Welcome to the Jungle (as of writing this) has gone on to collect $883.4 million at the worldwide box office. It was released on December 20, 2017, in the US. Make sure to read our review.

Are you excited about the Jumanji: Welcome to the Jungle 4K Ultra HD, Blu-ray, DVD, and digital release? Let us know.