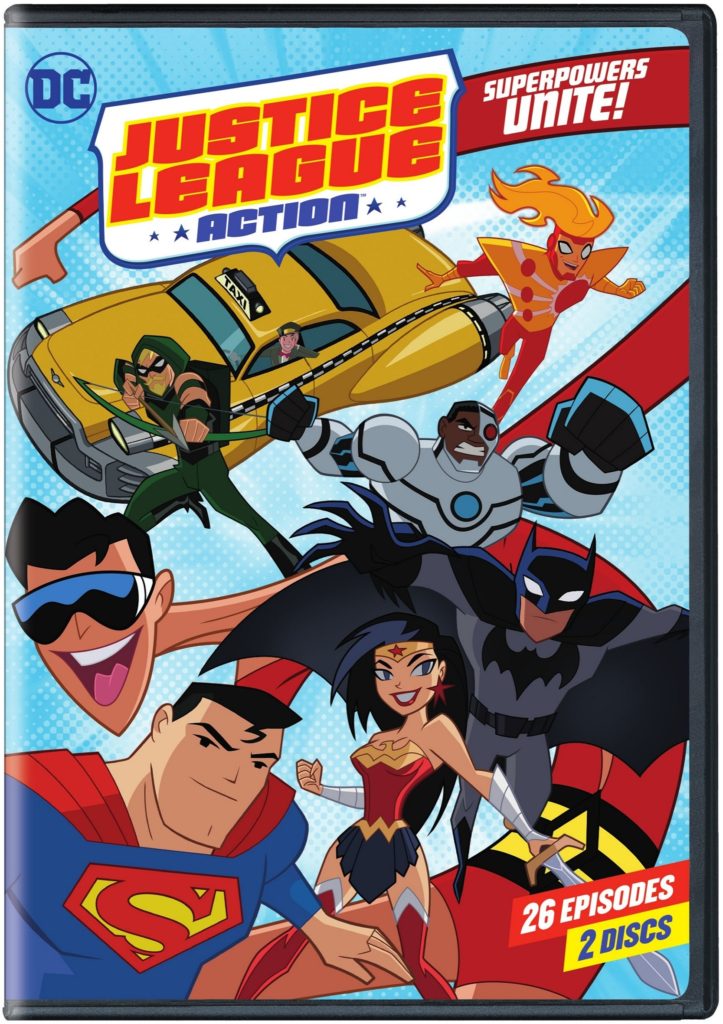 Warner Bros. Home Entertainment and DC Entertainment will be releasing the first DVD collection of the popular Cartoon Network animated series next month. You’ll be able to own the Justice League Action Season 1 – Part 1 DVD for $18.94 SRP on October 10, 2017.

Witness the Justice League like never before in this all-new animated series where the pace is quick, the action is relentless and the fun is non-stop! The “Trinity” of DC’s Justice League– Superman (voiced by Jason J. Lewis), Batman (Kevin Conroy) and Wonder Woman (Rachel Kimsey) – are joined by a galaxy of rotating allies and enemies like John Constantine, Zatanna, Booster Gold, Plastic Man, Lobo, Mr. Freeze, Black Adam and Swamp Thing. The Super Heroes must battle enemies that include space invaders and bizarre forces of magic as they try to defend Earth from Super-Villains intent on destroying the planet. No matter the threat, the Justice League is ready for the challenge.

“We are delighted to bring our fans the first release of the hit Justice League Action series,” said Mary Ellen Thomas, WBHE Vice President, Family & Animation Marketing. “With action-packed adventure and a star-studded voice cast, this DVD is perfect for kids and families to enjoy together.”

The 2-Disc DVD release will have a total of 26 (11-minute long) episodes from the first season of Justice League Action.

The approximate runtime for the Justice League Action Season 1 – Part 1 DVD is 286 minutes.

I enjoy watching Justice League Action. It allows writers to showcase other characters from DC Comics in an enjoyable manner instead of always focusing on Batman, Wonder Woman, and Superman. While the comedy isn’t as wacky as Teen Titans Go!, it’s still a fun way to spend 11 minutes of your time every week.

Speaking of Teen Titans Go!, the hit show will be getting a theatrical film which currently has a July 27, 2018, release date.

Are you a fan of Justice League Action? Are you looking forward to the DVD release? Let us know.

Previous:Star Trek Is for Everyone