‘Kingsman: The Golden Circle’ Adds Channing Tatum to the Cast! 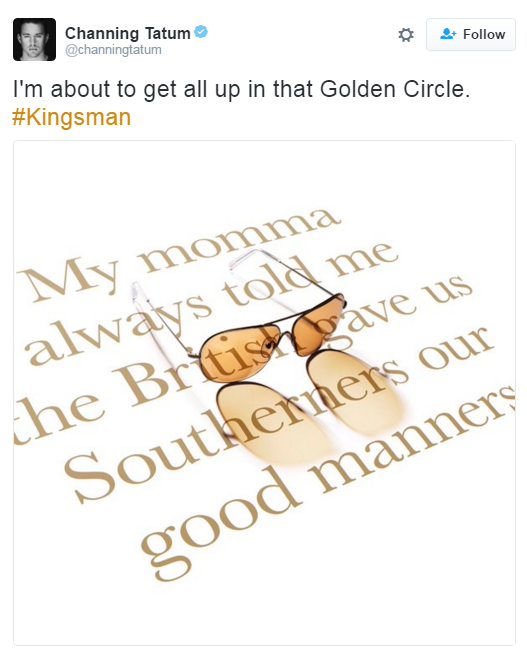 Another famous name has joined the upcoming spy-action film Kingsman: The Golden Circle. Actor Channing Tatum broke the news on his Twitter account, along with another promotional image for the film. Check it out!

I have no idea what the final film is going to be like when it hits theaters next year, but all of the casting news for Kingsman: The Golden Circle has certainly peaked my interest. Channing Tatum is the latest name to join the project. While details about his character haven’t been revealed yet, he will be joining the likes of other newcomers to the Kingsman franchise. Halle Berry and Pedro Pascal have been cast as Ginger and Jack respectively. They will be in charge of the Statesman, which is the American alternative to the Kingsman. Actress Julianne Moore will play the main villain, Poppy.

Taron Egerton will return as Gary “Eggsy” Unwin along with Mark Strong, who will reprise his role as Merlin. Some details regarding the film were released and the plot will show Eggsy and Merlin travelling to America after their own headquarters falls under attack.

Director Matthew Vaughn revealed that Eggsy will meet his match in an American spy. It is safe to assume that Channing Tatum might end up playing the role of the said spy. I will keep you all updated as soon as more details are released.

Singer Elton John is reportedly in talks to join The Golden Circle as well.

Along with the sequel to Kingsman, Channing Tatum will also be reprising his role in the 23 Jump Street/Men in Black crossover. Sony recently announced the official title to be MIB 23.

Kingsman: The Golden Circle is currently set to be released on 16th June, 2017.

Are you excited for Kingsman: The Golden Circle? What are your thoughts about Channing Tatum joining the project? Let us know!