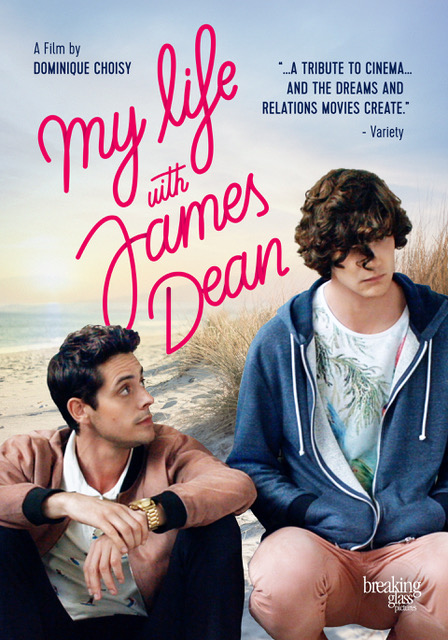 My Life with James Dean focuses on a young director named Gerard Champreux as he is invited to present his film in Normandy. What follows is a hilarious turn of events as Gerard meets the locals and finds the inspiration for his next project.

Breaking Glass Pictures provided me with a screener of My Life with James Dean for review. The opinions are my own.

I adore My Life with James Dean. Directed by Dominique Choisy, this French film has definitely earned a place on the list of my favorite queer movies. The entire feature has a whimsical charm to it which had me smiling throughout the 1-hour and 43-minute runtime (excluding the credits). It is silly but so good! I loved every second of it!

We are introduced to Geraud Champreux (Johnny Rasse) as he reaches Normandy to present his film. Things don’t start well for the director as he loses his cell phone and realizes that the locals aren’t interested in his queer piece titled My Life with James Dean because they prefer American action films and comedies.

Of course, the first screening doesn’t go well and Geraud finds himself drinking his disappointment away. He is also trying to figure out his relationship with his on again/off again boyfriend who is the star of his film (and I think is married to a woman).

A very young man named Balthazar (Mickael Pelissier) falls in love with Geraud and his movie and comes to the rescue by lying about the tickets sold. From there we follow Geraud, Balthazar, and an entire ensemble of weirdly pleasant characters on Geraud’s film tour.

Each cast member has their own issues to deal with. Sylvia van den Rood (Nathalie Richard), who invited Geraud to Normandy, is trying to win her girlfriend back. Gladys (Juliette Damiens) wants more in her life than just being a hotel receptionist. Balthazar is yet to come out to his parents and wants Geraud to fall in love with him. An elderly woman has a reason to watch every screening of Geraud’s film. There’s also a mysterious man Geraud keeps seeing.

Cinephiles are sure to notice homages to the history of cinema scattered throughout this movie. I personally loved the scenes where certain characters secretly followed other characters down the street. It was a wonderful homage to the silent days of cinema.

My Life with James Dean is a very vibrant film to watch as it showcases some beautiful scenery. There is so much color everywhere!

There’s also a sense of drama and sadness revolving the cast, but the comedic undertones make for an enjoyable viewing experience. It does get silly during many moments, but it all works to strengthen the overall charm.

Speaking of charm, Johnny Rasse’s Geraud kind of looks like a weird mix of a younger version of Robert Downy Jr. and Matthew Goode. Geraud has a fish-out-of-water aspect to his character which makes him all the more adorable.

Released today, My Life with James Dean is available on DVD and VOD (iTunes, Amazon) from Breaking Glass Pictures. You should definitely check it out!

Feel free to share your thoughts about My Life with James Dean with us.