Netflix Greenlights Live Action “One Piece”: Can They Do It Justice?

Are you ready to sail the high seas? Netflix announced today that a live action One Piece adaptation is in the works with Eiichiro Oda, the author of the original manga series, as Executive Producer.

Based on one of the most popular manga series of all time, Netflix has partnered with Tomorrow Studios and Shueisha to produce the ten-episode live action One Piece. Netflix will handle the physical production. Steven Maeda (Lost, The X-Files) and Matt Owens (Agents of S.H.I.E.L.D., Luke Cage) will both write and executive produce, with Maeda acting as showrunner as well. Other executive producers include Marty Adelstein and Becky Clements of Tomorrow Studios (Cowboy Bebop, Snowpiercer, Hanna) and Oda-sensei.

The announcement was made on Twitter via a graphic by Oda-sensei. 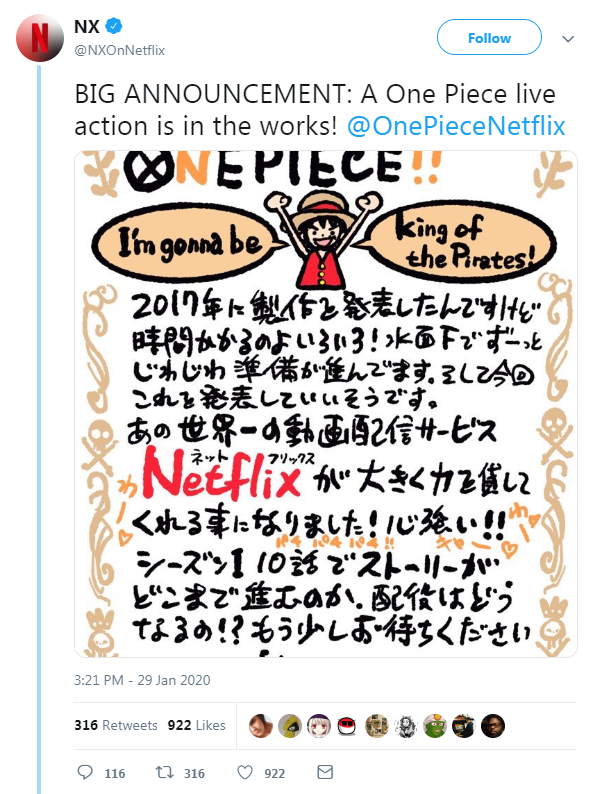 Translation of the quote:

I know I announced the production of this back in 2017, but these things take time! Preparations have been slowly progressing behind the scenes, and it seems that I can finally make the big announcement: Netflix, the world’s leading streaming entertainment service, will be lending us their tremendous production support! This is so encouraging!! How far will the story progress over the 10 episodes of Season 1? Who will be cast!? Please be patient a little longer and stay tuned!!

One Piece is the story of Monkey D. Luffy, a boy whose body gained the properties of rubber after unintentionally eating a Devil Fruit. Together with his Straw Hat Pirates, he searches for the ultimate treasure – the One Piece – that will make him the next Pirate King.

Anime fans tend to be wary of Hollywood-produced live action adaptations, and for good reason. They are usually terrible, either featuring a whitewashed cast or lacking the necessary cultural components to make the story make sense. Hollywood just doesn’t seem to be able to grasp what it is about anime that fans latch on to, and something is almost always lost in the translation.

I won’t even get into the discussion about how devalued anime is as a medium (like how anime films are often left out of the “Best Animated Feature” category even though they totally deserve the nomination). But I will mention that animated properties sometimes don’t translate well to live action. Some thing are just better animated; not everything needs to be live action.

So One Piece fans are justifiably skeptical that Netflix can put out a good adaptation. (They already missed the mark with their Death Note.) There is, however, some cautious optimism, considering Oda-sensei is involved with production. Fans are hopeful that he won’t allow a subpar product. One even pulled up some receipts, mentioning a quote from Oda-sensei regarding a live-action adaptation from a few years ago. 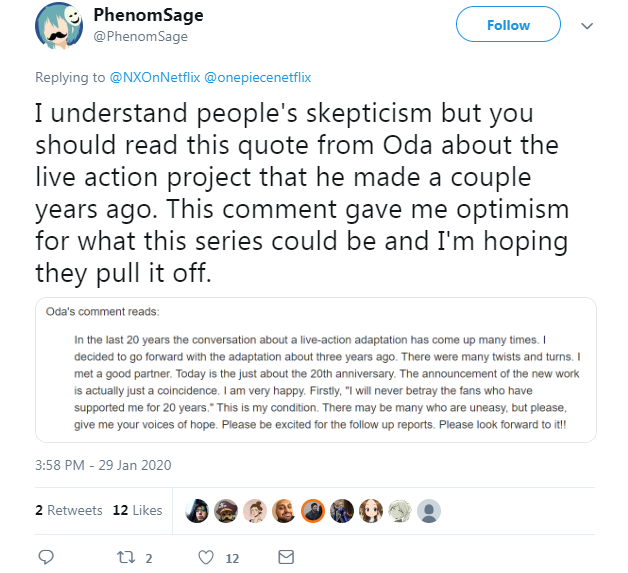 In general, feelings are mixed with this announcement, as they always are when something like this happens. A live action adaptation of an anime has the potential to bring in new fans, who may then be drawn to the original. Some people like having various incarnations of their favorite series. And with the creator involved, there is a less of a chance that there will be ridiculous changes made.

As always, it’s very much a “wait and see” situation. It’s not a good idea to condemn something without having seen it (though we do it all the time); then again, sometimes you just have to look at a studio’s track record.

What are your thoughts on the live action One Piece? Does Oda-sensei’s involvement affect your opinion?