Imagine a world where everyone spends their lives working towards one goal: kill the Demon Queen. Everyone, that is, except one person. She just wants to marry her. This is the world of Mage & Demon Queen. 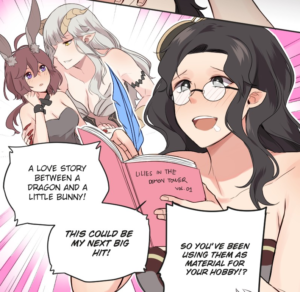 Mage & Demon Queen, hosted by Webtoon, is the story of young Malori, a mage and adventurer who has made it her mission to win over the heart of the Demon Queen, Velverosa. In this world that functions as a real-life fantasy RPG, Malori joyfully journeys to the Demon Tower on a regular basis and tries to woo Queen Vel, only to be rebuffed at every turn. She’s charmed all of the lesser demons, though, and even one of Vel’s generals, Melathia, ships the two of them to the point of writing erotic fiction based on them. No matter how many times Malori is killed, she keeps going back for more.

This is a really fun comic. Malori is pretty endearing as a main character with her stubbornness and determination, but you can also see why Vel finds her annoying. Yes, the romance is full of tropes, but honestly, who cares? So what if it’s stereotypical that one of the characters relentlessly pursues the other, and the other repeatedly refuses until the one day when the first character stops showing up and they realize that they actually did like that person? I happen to like stories like that. (There’s also a nice little side plot with Malori’s friend, Cerik, who is obsessed with Melathia, and Melathia has no idea who he is.) 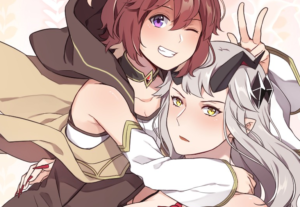 I’m a big fan of the art style, and I think Mage & Demon Queen in particular is very well drawn. There’s a lot of attention to detail in the panels, and I really like the coloring. Plus, it’s funny. There’s a lot of comedy, especially among the various demons. It’s a light-hearted romance with a heavy dose of adventure.

Unlike my previous Webtoon recommendations, Mage & Demon Queen updates twice a week, so the chapters are shorter. This makes it pretty easy to binge, but once you’ve caught up and are waiting for updates, it can feel slow. It’s not something I noticed when I started reading, but now it does feel a bit like the plot is dragging. But if you get behind, the shorter updates make it easier to catch up.

Mage & Demon Queen by Color-LES is hosted by Webtoon and updates on Tuesdays and Thursdays.

Previous:Why You Should Watch Queer Comedy Series “OUT On Stage” Premiering On Dekkoo This January!
Next: Uncanny X-Men Issue 10 Finally Acknowledges Storm Is An Actual Goddess?