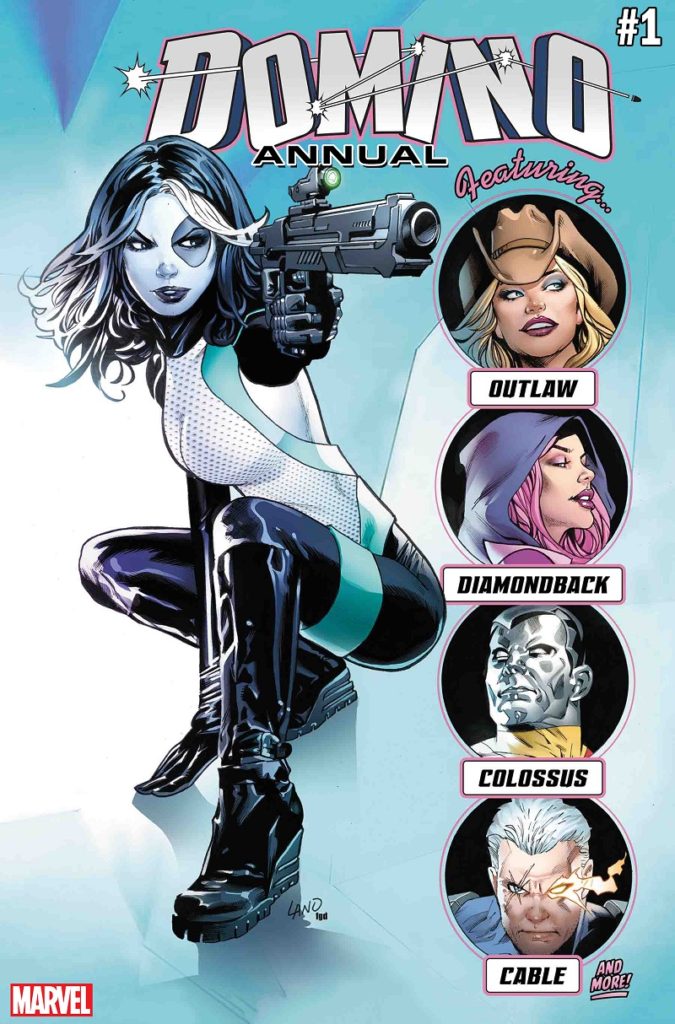 The current Domino solo series written by Gail Simone is awesome and that’s why I am glad we are getting an annual. Marvel will release Domino Annual Issue 1 on September 26, 2018!

According to the press release, Marvel has “assembled an all-star team to chronicle” Neena Thurman’s adventures. Writer Gail Simone will be joined by Fabian Nicieza (co-creator of Deadpool), Dennis Hopeless (Spider-Woman), and Lead Williams (X-Men Gold Annual #1) for the upcoming annual issue.

“Everyone’s been asking where this partnership between Domino, Diamondback, and Outlaw began…” says series editor Chris Robinson “…but there’s so much to cover in the present with Domino’s newest antagonists that we couldn’t take a pause from the action. When the opportunity arose to break that story in Domino Annual #1, the team jumped at it!”

The upcoming issue will also include Cable and Colossus. Both men are Domino’s exes. You should know that Colossus is all set to marry Kitty Pryde (Shadowcat) in the current X-Men Gold run.

The cover art for Domino Annual Issue 1 is by Greg Land.

Domino Issue 3 was released this week. The series by Gail Simone is teaching me a lot about Neena Thurman. I like knowing how her mutant power works. And even though Neena is one lucky individual (due to her limited telekinesis) she has gone through a lot ever since she was a child. Gail Simone brings a sense of empathy for Neena and I am looking forward to where she takes Domino’s story next. There is also a strong sense of friendship between the female characters which I appreciate.

Marvel will also be releasing a new Iceman series this September.

Are you a fan of the current Domino solo series? Let us know.