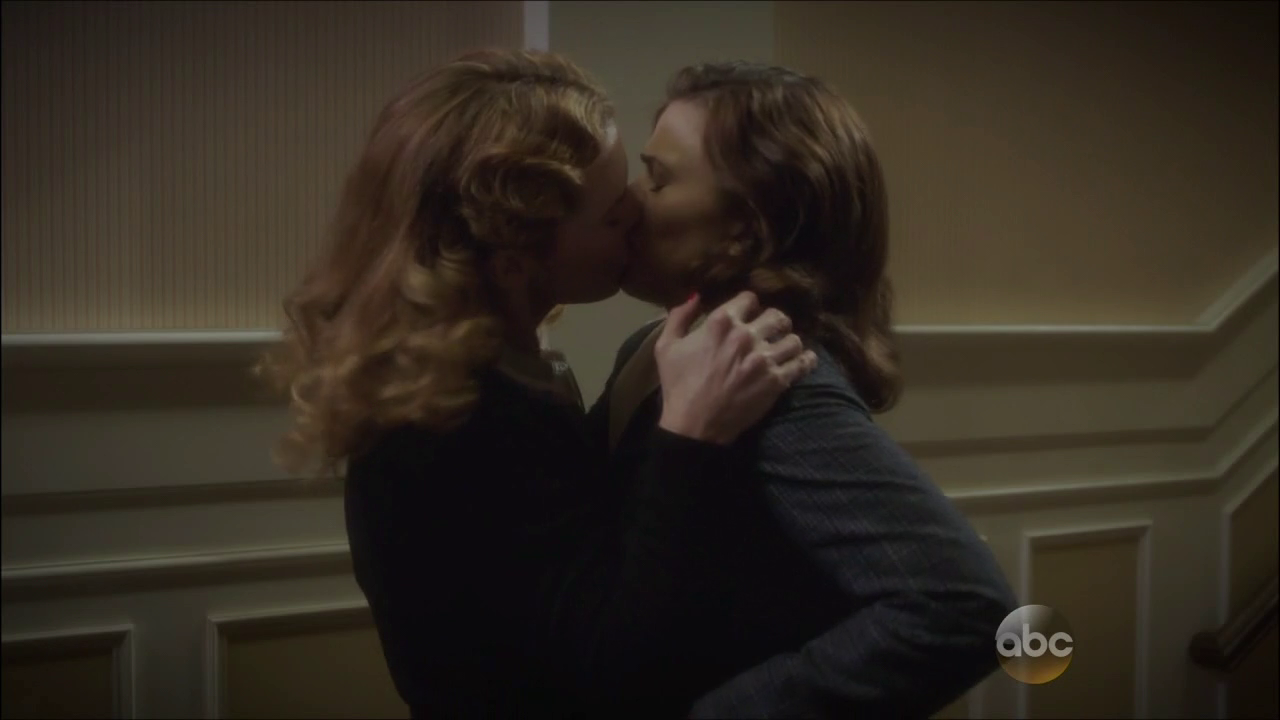 My writing partner Bandit was so busy hanging out at New York Toy Fair this past weekend – check out her coverage, she found some cool stuff – we kind of let last week’s Agent Carter review slide, but I just couldn’t miss the opportunely to talk about such an awesome episode. While “A Sin to Err” didn’t fix any of the diversity issues this show has been struggling with since day one, it did show a woman beating a man that attempts to sexually assault her and a couple of women kissed but it wasn’t for the male gaze. That’s definitely worth talking about.

In “A Sin to Err” Peggy has FINALLY earned the begrudged respect of Chief Dooley and thanks to her trip to the Red Room she’s also figured how Howard Stark got involved in this mess to begin with. If Howard Stark has one weakness it’s women. Unfortunately soon after Peggy is given the freedom to follow her hunch Sousa finds definitive proof that they’re own Agent Carter is the mysterious woman they have been one step behind throughout this investigation. Also the Soviet Scientist that supposedly defected is actually still on team Leviathan and in communication with Black Widow, Dottie.

First of all I got a little bored with the Soviet Scientist Ivchenko’s scenes towards the end of the episode. While they ended up building to a rather shocking climax they still felt kind of superfluous once we knew that he was still a Leviathan agent trying to infiltrate the SSR to find a mysterious item that was obviously one of Stark’s bad babies. So he can hypnotise white dudes by making them talk about their feelings. I’m pretty sure I could do that, and to be honest Agent Yauch was so painful that I was a little relieved when he got flattened by a truck.

Everything else about the episode was brilliant though. Maybe that’s why I got so annoyed with Ivchenko’s scenes. Why would I want to watch dudes talk about their feelings when I could watch Peggy beat the crap out of three government agents to a rocking soundtrack? Or see Dottie Underwood using a dentist drill on a sleaze that tried to take advantage of her?

“A Sin to Err” was so great for women besting the men around them. Peggy totally owning the agents that came to arrest her – with the added bonus of Jarvis playing the role of helpful girlfriend in the background. And then we finally got to see her punch Agent Thompson, which was just as satisfying as I thought it would be. Dottie might be a brainwashed Soviet assassin but it was still amazing to watch her take control of that situation in the dentists office – the whole drill bit might have been a tad extreme but everything before that was the exact reaction a girl should have to an asshole like that. 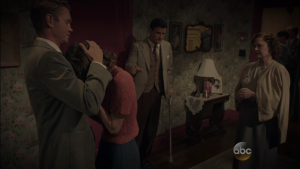 But without a doubt the best woman-besting-men moment was when Angie burst into tears to prevent Agent Thompson from finding Peggy. One, she just automatically helps Peggy even though there are government Agents looking for her and it’s obvious she’s been lying. That’s some super awesome lady camaraderie happening there. Two, Thompson and Sousa have literally just discovered that they’ve been tricked by a woman because they underestimated her and yet they keep falling for it. I shouldn’t complain though because it makes me happy, and really it’s pretty accurate.

Finally let’s talk about that kiss. You know the one. Dottie kissed Peggy. Unfortunately it wasn’t because she had fallen in love and decided to defect from the Soviets. It was just so she could transfer some of that night night lipstick Peggy uses. Was it exploitation? I don’t think so. I mean sure I would like it a whole lot more if it turned out Peggy is actually bisexual and that’s why she doesn’t pull back when Dottie kisses her. But I try to get my hopes up. I did like that as a Black Widow – Dottie is trained to use her sexuality as a weapon and she does so without regard for gender. That’s pretty cool.

What did you think of all the women-on-top in this ep? Did you love it? Are you shipping Dottie and Peggy? Do you want Thompson to get punched again? Let us know in the comments.

Previous:Dear Geekiary: Where Do I Start With Deadpool?
Next: “Just So We’re Clear, Recorder…”: An interview with Todd McFarlane (wherein my iPhone is a secondary character)