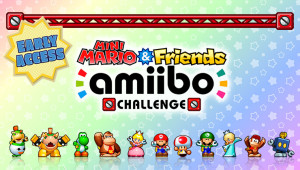 Last month during the March 3 direct, Nintendo announced that select Best Buy and GameStop locations as well as Amazon would be distributing early access codes for Mini Mario and Friends Amiibo Challenge for Wii U and 3DS with the purchase of any Amiibo figure or pack of cards. This game is part of the larger Mario vs. Donkey Kong series, which features small toy versions of the Mario characters. I am proud to say that this game is both adorable and a lot of fun for the price of an Amiibo.

Mini Mario and Friends Amiibo Challenge presents players with colorful and sometimes challenging puzzles that can be accessed by tapping a Mario-related Amiibo. Compatible Amiibo include all of the red-bottom Mario series Amiibo that were released with Mario Party 10 as well as Smash series Amiibo of characters that have appeared in Mario titles, such as Bowser Jr. and Rosalina. Fortunately, if you only have the Smash series version of a playable character but not the Mario series version, it still unlocks that character for gameplay. Better yet, if you do not own any Amiibo of Mario characters, you can still play with what you do have. For example, if you only own a Link Amiibo, you can still tap him in and you will unlock a playable robot character named Mini Spek.

The goal of the game is very simple: help your toy navigate each level, collect as many coins as possible, and make it to the exit door. The playable characters all have unique special abilities to help them complete stages and access to special stages only for them. The puzzles feature removable platforms that the player must place in order to provide a place for the toys to walk. The stages also include obstacles such as enemies and bottomless pits. Most of the puzzles are very straight-forward, making this game suitable for young children. Conversely, some of the puzzles can be quite tedious, but that is what makes the game entertaining. Regardless of difficulty level, there is something very satisfying about watching your toy in action going through each stage. The puzzles are exactly the same on both the 3DS and Wii U versions.

Overall, the demo alone is a lot of fun. I’ve gotten more use out of my Amiibo collection with Mini Mario and Friends Amiibo Challenge than any other game. I’m not sure that I would personally enjoy the full-length game without getting bored of it, however, that brings me to a huge praise for Nintendo in recent months. Nintendo has recently begun advertising more frequently for free, sizeable demos of popular titles such as Pokken Tournament and Bravely Second: End Layer. As a gamer on a budget, I cannot be more pleased with this. Rather than having to awkwardly wait for a turn at the Nintendo kiosks in stores or just buy a game and hope for the best, I can now try out a game in the comfort of my own home, sometimes before the game even comes out like with Mini Mario and Friends Amiibo Challenge and Bravely Second: End Layer. This will entice gamers to try out new products that they might normally have skipped on and find that they want to purchase the full version, and it will also help gamers to decide against games that might not be the best fit for them without wasting their money.

The full game is set for release on April 28. Have you tried Mini Mario and Friends Amiibo Challenge yet? What are your thoughts?

Previous:Chatting with the Creator and Cast of “Blindspot” at Paley Center NYC
Next: The Winds of Winter Delayed… Again.