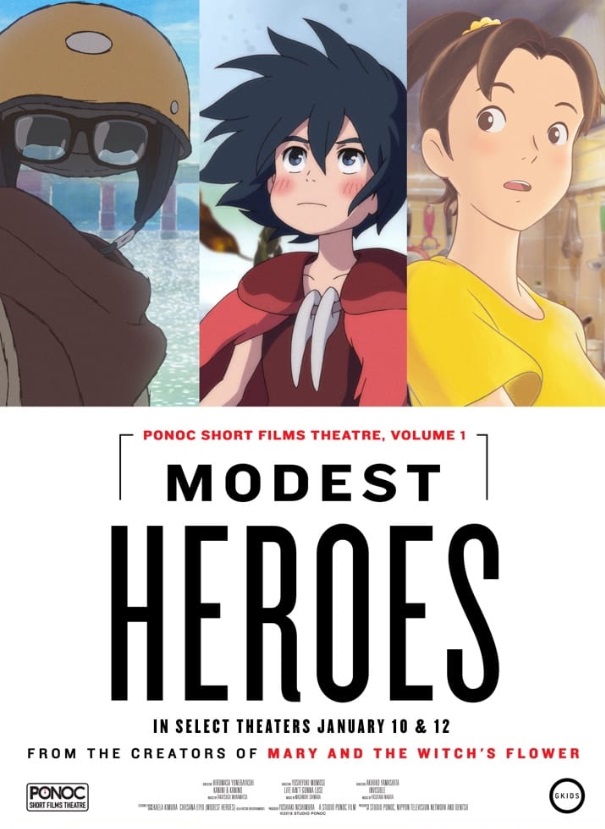 The upcoming theatrical offering is a feature-length collection of three short films from Studio Ponoc, the new Japanese animation studio founded by two-time Academy Award-nominee Yoshiaki Nishimura (The Tale of The Princess Kaguya, When Marnie Was There) and featuring many artists from the iconic Studio Ghibli.

Modest Heroes is the studio’s follow-up to last year’s “critically acclaimed” animated feature Mary and The Witch’s Flower. In addition to screening the anthology, attendees will be able to view behind-the-scenes exclusive content.

Tickets for Modest Heroes are currently available at FathomEvents, ModestHeroesFilm, and at participating box offices.

“Studio Ponoc is delighted to partner once again with GKIDS and Fathom Events to bring our Modest Heroes to fans and new audiences in the United States,” said Studio Ponoc founder and producer Yoshiaki Nishimura.

Here’s the synopsis for the three stories in the anthology:

Kanini & Kanino, Life Ain’t Gonna Lose and Invisible. Kanini & Kanino is directed by Academy Award®-nominee Hiromasa Yonebayashi (When Marnie Was There, Mary and The Witch’s Flower); Life Ain’t Gonna Lose, featuring the voice of Maggie Q (Nikita, Designated Survivor), is helmed by Yoshiyuki Momose, who was a key animator on Isao Takahata’s films at Studio Ghibli; and Invisible director Akihiko Yamashita was a key animator on many of Studio Ghibli and Hayao Miyazaki’s best-known films. Each is produced by Studio Ponoc’s Nishimura. Together, the stories explore ideas of heroism large and small, and the infinite potential of the short film format allows the directors and Studio Ponoc to experiment with breathtaking, action-packed visuals, concise human drama and gorgeous fantasy worlds, in an unforgettable anthology that is further demonstration of the studio’s exciting future.

In Kanini & Kanino, directed by Academy Award®-nominee Hiromasa Yonebayashi (When Marnie Was There, Mary and The Witch’s Flower), two crab brothers embark on a grand underwater adventure to find their father, after an accident carries him far downstream. Depicted as tiny beings in a large and merciless natural world, the brothers must evade a series of freshwater predators if they are ever to reunite with their family again.

In Life Ain’t Gonna Lose, acclaimed animator Yoshiyuki Momose (key animator on Isao Takahata’s films at Studio Ghibli, and animation director of the video game “Ni No Kuni”) makes his directorial debut with a very different kind of story. Eight-year-old Shun loves baseball and to run. Only eggs defeat him. With the love of his strong-willed mother (Maggie Q), Shun faces the challenge of an everyday life threatened by a deadly allergy.

Lastly, in Invisible (the directing debut of Akihiko Yamashita, a talented key animator on many of Studio Ghibli and Hayao Miyazaki’s best-known films) a man wakes up one morning and goes through his day in a world where no one can see him. But just when he seems to have reached his limit, a momentous decision gives him the chance to reclaim his humanity.

“Along with our friends at GKIDS, we brought some of the finest and best-loved Japanese animation to American shores in 2018,” said Fathom Events CEO Ray Nutt. “We are proud to once again partner with GKIDS to kick off 2019 with this wonderful anthology.”