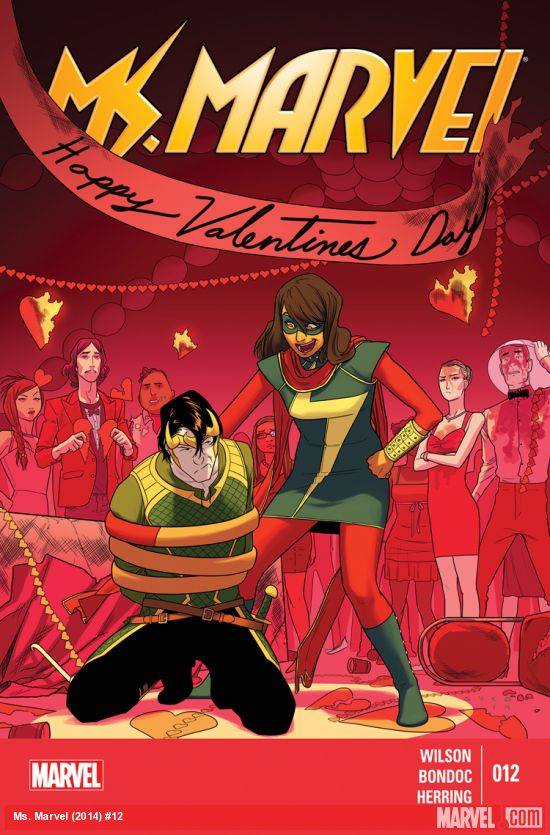 Ms. Marvel #12 was pretty much Valentine’s Day filler, and it would’ve been a very bad excuse to introduce Loki if not for G. Willow Wilson’s entertaining writing style and the humorous art by Takeshi Miyazawa. It’s fun to see heroes sit back and deal with their relationships, rather than go after villains in every issue and that’s why I enjoyed this story.

So, how does Loki end up in New Jersey? After Ms. Marvel defeated The Inventor, the All-Mother teleports him to the city. She’s worried The Inventor’s side-kick was close to making a machine that could open a passage to Asgard, and there could be spies in the area. I have no idea why she would send the God of mischief to weed out possible spies in the high school Kamala attends but I went with it and enjoyed it immensely. 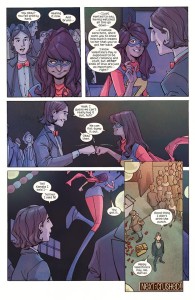 Bruno’s crush on Kamala Khan has been obvious from the start but her religion, as well as her family’s background, make it hard for him to confess his true feelings. I liked how Loki tried to help Bruno by making him write a love letter to Kamala. It didn’t work in the end because Kamala wasn’t sure who sent it because Bruno didn’t sign his name. Kamala also shared a hilarious conversation with her friend Nakia about how she was going to play videogames until the possibility of someone loving her came up through the letter.

Willow Wilson used Valentine’s Day quite wonderfully in this story. Kamala went to the party to see who sent the letter and Loki was already there to find spies. He spiked the punch with truth serum and it was awesome seeing teenagers be honest to each other and the fight that ensued. There was also a female couple at the dance so points to Wilson for showing some sexual diversity in the issue.

Loki and Ms. Marvel fought it out and even the high school students joined in. Loki’s plan to make the teenagers speak the truth backfired on him. In the end, he placed a protective spell on the high school when he found out there were no spies there. It’s obvious Wilson knows Loki and he didn’t feel out of character throughout the story. She did a great job with him just like when Ms. Marvel and Wolverine teamed-up.

Coming to the ‘romance’ part of the issue, Bruno still didn’t confess his feelings to Kamala. However, I did like that Kamala kind of knew he was into her. Whether or not she liked him back due to differences in religion, etc. is another issue. Wilson also gave a good message about love existing in different forms. Love doesn’t have to mean something sexual or romantic because you can also love your friends. It’s a different kind of love than we usually see privileged in mainstream media but it is still love and it should be cherished.

What did you think of Ms. Marvel #12? Did you enjoy Loki being in the story? What do you think of Bruno having romantic feelings for Kamala? Let us know!