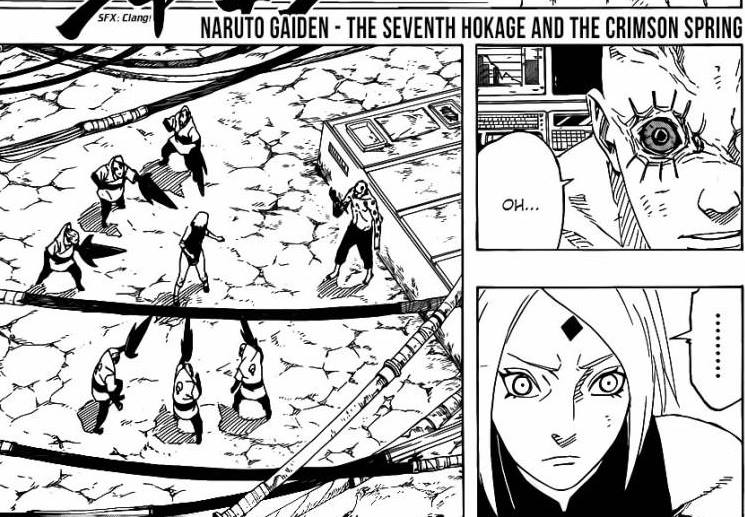 Nothing much happened in this week’s manga issue of Naruto Gaiden – The Seventh Hokage in terms of plot because it was quite action-oriented. Seeing Sakura fight it out with Shin was a treat, and Salad revealed some of her hidden powers.

Naruto Gaiden – The Seventh Hokage: I’ll Protect You more or less cemented the fact that even if Karin was revealed to be Salad’s biological mother, in the end Sakura was still her ‘real’ mom. I still highly doubt that Kishimoto made Sasuke have a child with Karin, but even if I’m wrong, it’s good to know that Sakura has a very special place in Salad’s life.

Is it just me, or is Naruto a better father figure to Salad than his own son Boruto? We haven’t seen the two interact much yet in the manga and I do hope Naruto gives time to Boruto, too, even if it’s off-panel, and Boruto acting out is just him being childish.

I would’ve liked to see Sakura landing more punches on the enemy. The whole fight occurred off-panel and after being hit in the arm with Shin’s paralyzing blades Sasuke came into rescue her. I still can’t understand why Shin even thought of attacking powerful beings like Naruto and Sasuke. His whole plan felt weak from the start and seeing him fail didn’t come as a surprise. 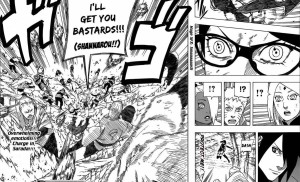 The biggest surprise this week was Salad jumping in to protect the grown-ups. She performed a similar attack Sakura did when she activated her forehead seal during the Ninja War. I liked how Sasuke looked impressed by his daughter’s incredible strength the same way he was by Sakura’s years ago. Salad even yelled out her mother’s battle cry during the attack and the whole thing was awesome to see.

Some of you might think Salad was shown too overpowered for someone who wasn’t even a Genin yet. But then again Kakashi had already become a Jonin when he was about her age so seeing Salad, the daughter of Sasuke and Sakura, performing such a powerful attack felt right to me.

Did you read Naruto Gaiden – The Seventh Hokage: I’ll Protect You? What did you think of Salad’s power? What kind of powers will Boruto have? Let us know!