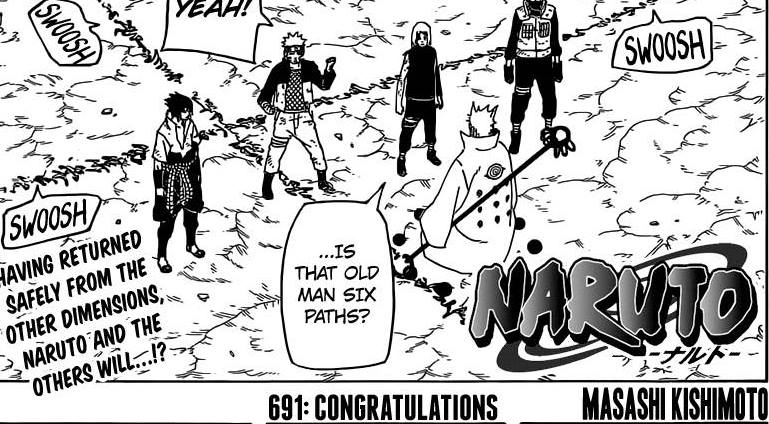 It’s finally here Naruto fans, the epilogue to the Ninja War and the end of an amazing series. This week’s issue said farewell to a lot of characters that popped up during the war.

I guess last week’s issue really was the beginning of the finale. Kaguys was sealed by Team 7’s efforts and they were summoned to the real world by the Sage of the Six Paths. The Sage of the Six Paths is a legend in Naruto Universe, a character that only lived in myth. I liked how Sakura was too tired to make sense of what she was seeing. Through her Kishimoto gave us a little meta moment. With all the things that have happened throughout the war, seeing the legendary Sage of Six Paths was something Sakura was ready to admit at this point.

If I was Kakashi I would’ve felt proud being praised by the Sage. He clearly said that it was Kakashi’s leadership that helped Naruto and the rest take down Kaguya. Then Kishimoto made Kakashi mention Obito and ruined the moment for me. I can’t understand why Kishimoto decided to make Obito redeem himself. Obito was the reason the ninjas went to war in the first place and he personally killed countless people in his plan to bring back Rin, his crush from when he was twelve years old. Even though Kakashi and Naruto forgave Obito, I don’t think all the readers have.

The issue was all about saying farewells to each other. Sasuke wanted to kill Madara but the Sage told him he was going to die either way because the Bijju’s had been extracted from him. I have been a huge fan of Madara since his debut as an Edo Tensi during the
war and I wanted him to go out a villain. His little conversation with Hashirama felt as if he regretted the decisions he made in his life. I really wanted Kishimoto to give me a villain who didn’t have any regrets when he or she died. At this point he has turned every major antagonist into a good guy. 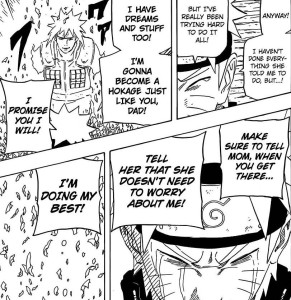 The best parts of the issue was the last few panels. Minato got to wish Naruto a happy birthday and Naruto’s speech reflected what his mother told him before she died. In a sense Naruto has grown a lot throughout the series. He’s still the dumb hyper-active kid we were introduced to back in Part I but he has definitely matured in his own way. I like how he accepted that it was going to be the last time he would be able to speak to his father and he utilized the moment. When he started to talk about the type of woman he should marry I was expecting him to mention Sakura or Hinata. However, that didn’t happen and I think Kishimoto will resolve the ‘shipping war’ in the last issue of the series.

With the Edo Tensi gone I’m curious to know what the Sage will do with all the tailed-beasts. Will he release them into the world as pure energy or will the cycle of Jinchurriki’s begin anew?

What did you think of this week’s chapter of Naruto? What are your thoughts about all the villains being redeemed before their deaths? Let us know!