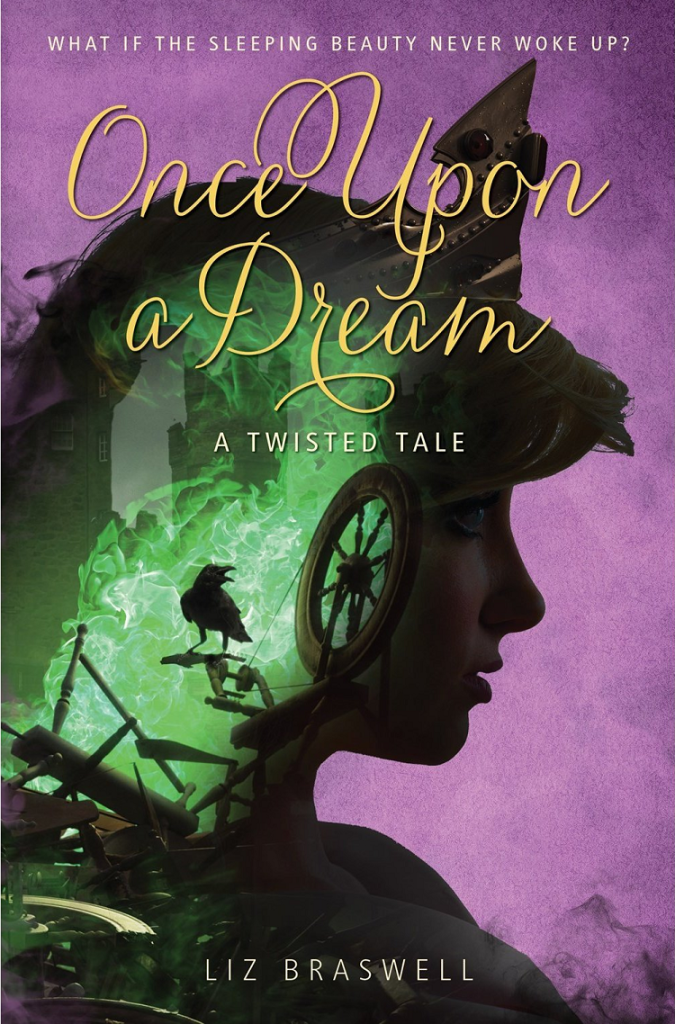 Imagine a world where Sleeping Beauty never wakes up, where Maleficent is more like Voldemort than anyone realized, and where the three good fairies channel their inner-Leo and pull off inception.

This is the world presented to us in Once Upon a Dream, Liz Braswell’s second offering in Disney Press’s “Twisted Tales” series. It gives us an alternate ending for the classic tale of (Disney’s) Sleeping Beauty, where instead of being awoken by true love’s kiss at the end, Princess Aurora stays asleep, trapped in a dream world that seems just as real – and just as deadly – as the waking one.

Sleeping Beauty has long been one of my favorite Disney films for reasons I’ve never been able to fully identify, and even though I was disappointed in Braswell’s first book in the series, when I found out that Sleeping Beauty was the focus of the next one, I knew I had to at least check it out. I didn’t have very high expectations going in, considering how I felt coming out of A Whole New World, but I decided that I wasn’t going to let my opinion of the first book sully my opinion of the second before I’d even read it.

I’m not going to lie to you – Once Upon a Dream is not an amazing book. The writing is too modern and casual for a story set in the 14th century, and a lot of the dialogue is either WRITTEN LIKE THIS or written like this, and it just seems way too juvenile for a book supposedly aimed at teenagers. The twist has a twist, and it took a shade too long for the actual story to get moving. Aurora often comes across as bratty and childish, but then she’s going through a lot, so I can generally forgive her that. The inconsistencies in her character, though, can be a little jarring.

Additionally, a lot of the characters lack true depth. Maleficent is still cartoon evil; there is a little bit of interesting development at the beginning, but eventually it goes away. It’s hinted that there is a reason she became this way, yet we never learn what it is. I still greatly enjoyed the character of Phillip (one of my favorite Disney princes), but even though his relationship with Aurora is more fleshed out in this, it still doesn’t really make any sense. Even after finding out that his first impression of her was incorrect, he never loses his admiration or love for her; however, she tends to find him annoying and tiresome, though she does seem to care for him.

One thing that Once Upon a Dream does well is giving Aurora more agency. One of the many, perfectly valid criticisms about Sleeping Beauty is that Aurora doesn’t do anything. She’s pretty and then she falls asleep and gets rescued by Prince Phillip. In Once Upon a Dream, the entire premise is that Aurora must wake herself up, and in the process of doing so she goes on a journey of self-discovery where she tries to determine who she really is apart from her beauty and grace.

Calling Aurora’s struggle to reconcile the two parts of herself (the fake history she was given in the dream world, and the “real” history that was also a lie in the waking world) a metaphor for depression is giving it too much credit. Mostly because I don’t think it can be called a metaphor if you’re being smacked in the face with it. Once Upon a Dream shows us that charming, happy Aurora is all a mask to hide her loneliness, depression, and suicidal thoughts. Aurora’s inner monologue can be dark and triggering at times, but I think it is important to have this kind of story; yes, Aurora suffers from feelings of inadequacy and self-doubt, at times to a crippling degree, but she is able to power through and overcome it. She doesn’t do it alone, but in the end it is ultimately her actions that save the day.

Something else that people may enjoy about Once Upon a Dream are the callbacks to the original story which blatantly point out the issues with it: the fact that Maleficent cursed an innocent child to die because she wasn’t invited to a party, the fact that Phillip and Aurora fell in love at first sight, the fact that “beauty” and “grace” are ridiculous gifts to give a princess who is the sole heir to a kingdom…

On the whole, I enjoyed Once Upon a Dream more than I did A Whole New World. It still suffers from underdeveloped characters and a writing style too young for its intended audience, but I thought that the plot was more clever and engaging. I also found its message to be a little more applicable to teenagers – and all readers in general – and its ending, though bittersweet, to be more uplifting.

Once Upon a Dream by Liz Braswell is published by Disney Press and is currently available wherever books are sold.

P.S. If you are a fan of Sleeping Beauty and Princess Aurora, please read Mary Costa’s (the original voice of Aurora) open letter to her fans in honor of her 86th birthday.

Previous:iZombie Ratings Slip – Can the Season 2 Finale Save Them?
Next: New Avengers Issue 9 Review: Up From the Depths