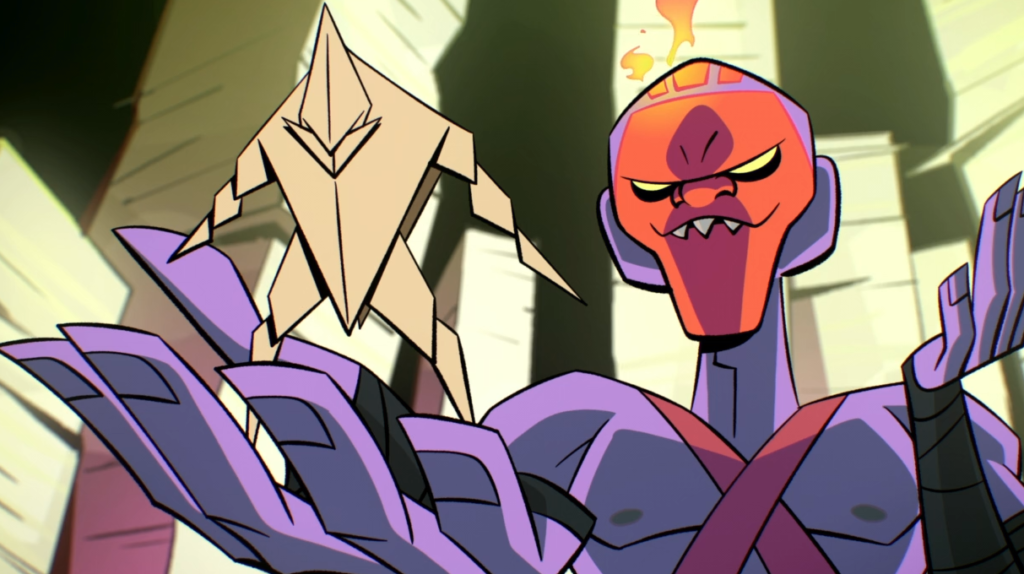 The second episode of the Rise of the Teenage Mutant Turtles animated show introduced us to more new villains that will be appearing in the new series. ‘Origami Tsunami’ showed us the Foot Clan while ‘Donnie’s Gifts’ served as the debut of Meat Sweats.

With the premiere showing the turtles still requiring a lot of training to become proper heroes, episode 2a or ‘Origami Tsunami’ had them decide on their first mission. I enjoyed how Leo wasn’t interested in handling anything dangerous like the villains responsible for breaking spines and mangling people. The brothers finally decided on apprehending some paper thieves, not knowing they were from the Foot Clan.

I have already mentioned how the series featuring hand-drawn 2D animation is likely to urge artistic kids to draw the characters themselves. And with the Foot Clan using origami to create constructs, I wouldn’t be surprised if some kids decide to try out origami in real life as well. It is great to see a show having the potential to inspire.

The turtles weren’t able to properly defeat the Foot Clan members, but it was cool to see Raph figuring out that his magical tonfas can create an amazing looking full body armor made of red energy for him.

In ‘Donnie’s Gifts’ or episode 2b, we got to see more of the turtle’s personalities. Even though Raph is supposed to be the leader because he is the oldest, you can tell he isn’t cut out for such a position. He acts before he thinks and relies too much on his brute strength. Fans know Leo is supposed to be the leader. That is why it will be interesting to see how Rise of the TMNT handles Raph giving up his leadership role to Leo.

‘Donne’s Gifts’ is the title because Donatello gives his brothers wearable gifts. Raph got a helmet with an AI telling him what to do. Leo got a shock collar, and Mikey got an inflatable body suit. While we don’t get to see Donnie explaining how the gifts are supposed to be used, it was fun to see the three brothers trying to figure it out themselves while complaining about Donnie not appreciating their unique personalities. I also liked how Leo and Mikey wanted Raph, because he is the oldest, to tell Donnie what they really thought about the gifts he gave them.

As for Meat Sweats, I like his character design. I am not sure if he is also able to kill the beings he absorbs powers from if he doesn’t stop draining them, but having the ability to steal someone else’s powers does make him a formidable opponent for the turtles to fight.

I am very interested in the ratings for the current series. I have been keeping an eye on things, and while ‘Origami Tsunami’ and ‘Donnie’s Gifts’ weren’t able to cross the 1 million viewership mark, the viewing numbers seem to be improving. The series has already been renewed for a second season, and I hope the current season is able to perform well so Nickelodeon doesn’t decide to cancel the second outing it has already greenlit.

In related news, do check out the awesome Rise of the TMNT items from Playmates Toys.

What did you think of ‘Origami Tsunami’ and ‘Donnie’s Gifts’? Let us know.