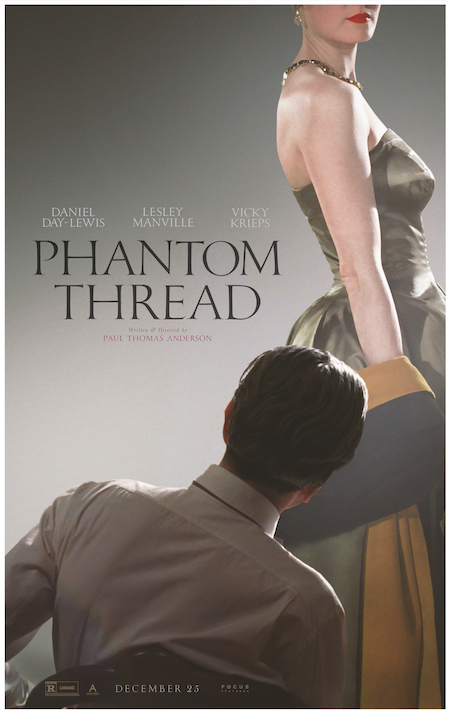 The first official trailer for Paul Thomas Anderson’s film Phantom Thread has been released. It stars Daniel Day-Lewis, who’s teaming up with Anderson after their 2007 film There Will Be Blood.

The official trailer for Phantom Thread showcases a project that’s perfect Oscar bait. It is beautiful to look at but has a sense of dread as the two leads try to make sense of their relationship. Also, you can always count on Daniel Day-Lewis to deliver spectacular acting.

Set in the glamour of 1950’s post-war London, renowned dressmaker Reynolds Woodcock (Daniel Day-Lewis) and his sister Cyril (Lesley Manville) are at the center of British fashion, dressing royalty, movie stars, heiresses, socialites, debutants and dames with the distinct style of The House of Woodcock. Women come and go through Woodcock’s life, providing the confirmed bachelor with inspiration and companionship, until he comes across a young, strong-willed woman, Alma (Vicky Krieps), who soon becomes a fixture in his life as his muse and lover. Once controlled and planned, he finds his carefully tailored life disrupted by love. With his latest film, Paul Thomas Anderson paints an illuminating portrait both of an artist on a creative journey, and the women who keep his world running. “Phantom Thread” is Paul Thomas Anderson’s eighth movie, and his second collaboration with Daniel Day-Lewis.

The film features a score by Radiohead’s Jonny Greenwood. Focus Features will release Phantom Thread in select cities on December 25, 2017.

“You can sew almost anything into the canvas of a coat. When I was a boy, I started to hide things in the lining of the garments,” says Reynolds Woodcock (Daniel Day-Lewis) in voiceover. “Things that only I knew were there. Secrets.”

I got to know about Daniel Day-Lewis after seeing his queer-centric film My Beautiful Launderette. It’s an awesome movie which talks about Pakistani and English communities in London. Apparently, Phantom Thread is the actor’s final film before retirement.

If the trailer for Phantom Thread made you excited for the film, I recommend watching The Collection while you wait for December. The Collection is a highly enjoyable show on Amazon Prime that shines a light on the fashion world in Paris after World War II.

Also, after you’re done streaming The Collection, check out Harlots, a series on Hulu (The Handmaid’s Tale, Marvel’s Runaways) that’s inspired by The Covent Garden Ladies by Hallie Rubenhold. Lesley Manville who plays Cyril Woodcock in Phantom Thread is part of Harlots cast and does an awesome job.

Feel free to share your thoughts about Phantom Thread? Do you it’ll be winning any Oscars in 2018? Let us know.