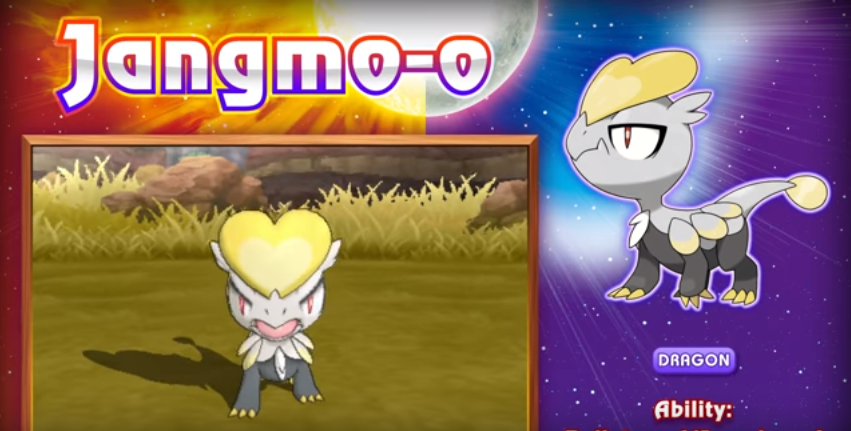 The official Pokémon Company knows how to keep the world excited for the upcoming Sun and Moon game. A new trailer for the next installment in the Pokémon franchise provides fans with more content.

The trailer shows two new Pokémon from the Alola region. The first is named Type: Null. It is a Normal-type Pokémon with an ability called ‘Battle Amor’. It has a unique kind of design. The tail of this creature looks like that of a Water-type Pokémon, and the front legs seem to belong to a Flying-type.

The second new Pokémon that was revealed is named Jangmo-o, a Dragon-type. The ability of this tiny creature is ‘Bulletproof/Soundproof’.  The forehead also appears to be in the shape of a heart. It’s kind of cute and I’m looking forward to seeing its evolutionary stages.

The new game will also be featuring Alola forms of some previous Pokémon. The trailer revealed the Alola form of Raticate, making it a dual Dark plus Normal-type Pokémon. It has the ‘Glutton/Haste’ ability.

The trailer also revealed that both Sun and Moon are set 12 hours apart. This also means that certain events in the game will play out differently in both versions. The trailer gave an example by showing the different types of Pokémon players will encounter during key moments in Sun and Moon.

Another feature is a Zygarde Cube that allows players to explore the Alola region for Zygarde’s cores and cells. There is also a Poké Finder for taking pictures of Pokémon encountered in the wild. Sun and Moon also introduces Ultra Beasts. The one shown in the trailer is UB-01.

I’m excited to see how the content from the Sun and Moon game will translate to the Pokémon anime. Does making Zygarde a part of the game means that Ash’s current companions will join him in Alola as well?

The upcoming Sun and Moon will be released for the Nintendo 3DS on 18th November, 2016.

What did you think of the new trailer for Pokémon Sun and Moon? Let us know!

Previous:Hit the Floor 3×11 Summer Special Review: Till Death Do Us Part
Next: Blood & Gourd Issue 2 Review: All the Gore! All the Fun