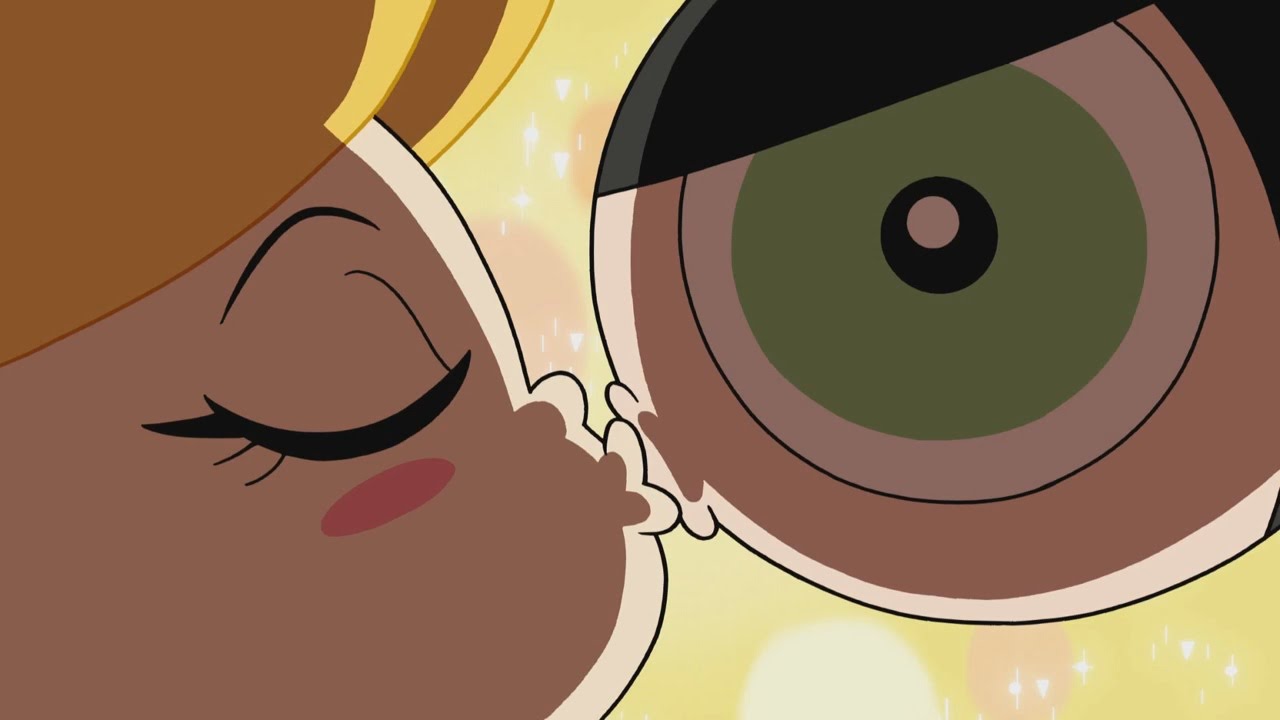 In the Powerpuff Girls (2016) episode “Once Upon a Townsville”, a surprising milestone was reached for queer representation: Buttercup shared a long, on-the mouth, onscreen kiss with another female character.

In a time where depictions of same-gender romance are still heavily censored and discouraged, especially in children’s entertainment, this marks a huge step forward. However, even with all the progress that’s been made in recent years, there are still a lot of strange double standards and strides which need to be made to overcome them.

It doesn’t exactly come as a surprise to anyone that getting LBGTQ characters into kids’ media remains a challenge. Issues of gender identity and sexual/romantic orientation remain very taboo across the globe, and companies are wary of losing revenue by touching upon them. But the tide has been turning, and with the recent legalization of gay marriage in countries such as the USA, Ireland and Scotland, companies have been willing to take more risks. Creators have finally been allowed to include openly queer characters into their shows, providing young LBGTQ kids with valuable role-models, while also helping an entire generation learn tolerance and acceptance.

One of the most memorable and discussed examples of these characters comes from the 2014 series finale of Nickelodeon’s The Legend of Korra, where after two seasons of build up, the main character Korra begins a romantic relationship with her friend Asami. After a touching heart-to-heart, the very last scene is the two holding han

ds as they’re enveloped in a magical golden light, a direct reference to the last shot of the series’ predecessor, Avatar: The Last Airbender. There’s just one key difference.

The lack of on-the-mouth kissing is a recurring motif, even as lesbian, bisexual and gay characters become more and more common in animated media aimed at children. Korra and Asami were allowed to gaze longingly into each others eyes, but no kissing actually occurred, which left many arguing the romantic nature of their relationship was ambiguous. While series creators quickly posted online to confirm that the two were together, co-creator Bryan Konietzko admitted that it wasn’t a “slam dunk for representation”. Other shows have faced similar struggles.

In Clarence, the titular character’s friend Jeff has two moms, who have been shown holding hands, but never kissing. Indeed, the show had previously had to change a planned on-the-mouth kiss shared by a background gay couple into a cheek peck. Steven Universe has been rightly praised for its queer representation, notably Pearl’s for Rose Quartz, as well as the utterly adorable couple Ruby and Sapphire. Yet while Ruby and Sapphire have kissed multiple times — on the eye, the cheek, and even the chest — a lip kiss has yet to happen. Some might wonder what the issue is, but simply put, two characters locking lips remains one of the strongest symbols of romance in our culture. 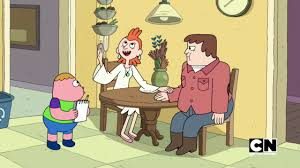 This is what makes the kiss between Buttercup and Princess so monumental. In a society where public displays of affection between gay couples remains illicit, The Powerpuff Girls reboot is the first show to cross that line.

Yet even then, the kiss was rather… underwhelming, at least for such a big First. It didn’t mark the start of some long-term romance, or even a single-episode crush. The kiss was entirely accidental. The set-up for the plot was that Princess Bluebell, a parody of a traditional Disney princess, is accidentally transported to the City of Townsville while searching for her prince. As her unconscious body plummets to the ground, she’s caught by Buttercup. The first thing she does upon waking is kiss her savior, assuming Buttercup to be a boy. The whole kiss is played for comedy, and then left untouched for the rest of the episode as it rushes into a story about damsels, distress, and traditional femininity. None of this is necessarily bad. The moment still marks a shift in societal opinions, and casual depictions of same-gender kisses will definitely help the normalization of queer people in general. Still, it would be nice to finally see a gay kiss given the same grandeur of something like Beauty and the Beast. 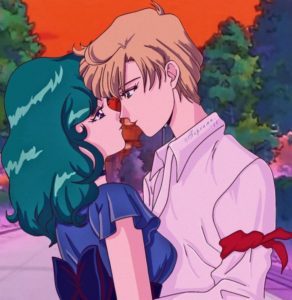 Of course, at least the above examples have even been allowed to be up-front about the existence of their gay characters. Other cartoons aren’t even given that opportunity. During the 1990s, creators of shows like Batman: The Animated Series, Hey Arnold!, and X-Men Evolution had to be subtle about slipping in signs that characters were queer. When faced with Japanese shows which were more explicit, American censors responded by hiding the characters as best they could, such as the American Sailor Moon dub changing the characters Hakura and Michiru into ‘cousins’ to disguise their intimacy as platonic, or the Cardcaptor Sakura dub flat-out hiding the romantic relationship between Yukito and Touya. Currently, American cartoons are now facing international censorship for queer themes, such as the editing of Steven Universe episodes in the UK and Sweden to downplay the romantic relationships between the Gems. This phenomenon isn’t restricted to the past or other countries, but remains prevalent within the American industry itself.

While one does have to give credit to Cartoon Network for the representation they’ve given in Clarence and Steven Universe, one sore spot that remains is Adventure Time — specifically, the relationship between Princess Bubblegum and Marceline. Hints of their romantic past have been evident since the 2011 episode “What Was Missing”, and recent seasons have made these undertones more and more evident, with the two sharing many a tender moment. Olivia Olsen (Marceline’s voice-actress) has gone on record saying the two had dated previously, but Cartoon Network can’t show it explicitly, due to the potential of those episodes being banned in countries where 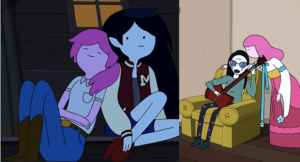 homosexuality remains illegal. That interview is a couple of years old now, and considering the risks they’ve taken on other shows, one has to wonder what’s with the network’s continued hesitance. Is it because unlike in Clarence, Marcy and PB are main characters, and unlike Steven Universe, they don’t have the excuse of being ‘agendered space rocks’? (To which I’d say: Marceline is a half-demon vampire, and Peebs is literally a sentient wad of bubblegum).

Disney’s doing even worse. It’s true that they included a minor lesbian couple in a episode of the live-action show Good Luck Charlie. Otherwise, they’ve been very reluctant to include any queer characters in their kids’ media. Storyboards from the Gravity Falls episode “The Love God” included a moment where Cupid was going to match two 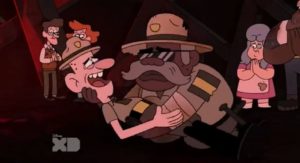 ladies together in the storyboards. In the final product, they were changed to a straight couple. The recurring characters Sheriff Blubs and Deputy Durland were often implied to be in a romantic relationship, and the series finale gave as much confirmation as it could, with the pair embracing each other and professing love — but again, no kissing occurs, and plausible deniability remains in place. It’s because of examples like this that I remain wary of the recent excitement of there being a lesbian couple, however minor, in the upcoming Finding Dory, or that Disney would be willing to give Elsa a girlfriend. 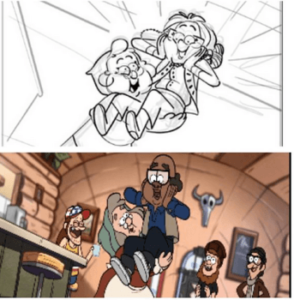 Storyboard from the Gravity Falls episode “The Love God” vs the finished product.

There are other examples of representation double standards that persist across the western animation industry as a whole. You’ll notice, for example, that the majority of the examples listed here are of lesbians or bisexual women, with gay men being even rarer in comparison. This may possibly be due to open displays of affection between women being more easily written off as platonic than between men. Transgender characters fair even more poorly. There’s an example in Adventure Time’s BMO, a talking video-game console that switches between he/him and she/her pronouns. There’s also Steven Universe’s Stevonnie, a fusion who canonically uses they/them pronouns. While they’re both great, in terms of representation, they do leave something to be desired; the average non-binary person isn’t going to be a robot or magical fusion, and when these make of the sum total of non-binary characters in kids’ cartoons, it leaves the unfortunate implication of it being something inhuman. There are a few other possible examples of shows that provide transgender characters, but their cases are more ambiguous. The 1999 series Cybersix followed its titular character, an artificial human who turned against her creator 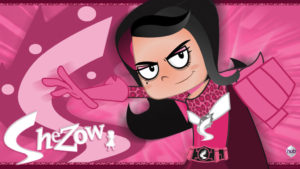 , and poses as a male high-school teacher Adrian by day, but is a vigilante femme-fatale by night. Another animated show which plays with the gender binary is SheZow (2013), about a boy named Guy who gets bonded to the magical ring of a dead superheroine, and takes on her mantle, complete with dress and high heels. There’s barely any representation of non-binary and transgender for children looking to see themselves — and that representation is needed, considering that these are some of the groups most at risk of depression and suicide.

This is why the issue of representation is so important. It’s not just an issue of tokenism or throwing certain groups a bone. The media we create and consume has an impact on real-world attitudes. By seeing queer people on TV, children get to learn that they exist — that they can be funny, and smart, be heroes, save the day and live happily ever after. It fights hate before it ever has the chance to form.