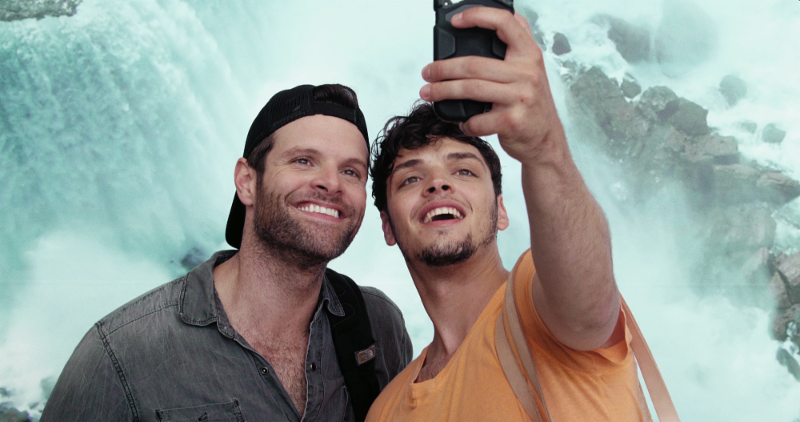 Cole Burden as “Darren” and Chris Modrzynski as “Dean” in The Rainbow Bridge Motel (Image: PR)

The premise of The Rainbow Bridge Motel is simple. Two gay men want to get married near Niagra Falls, but a reservation mishap takes them to a rundown motel. Comedic situations ensue. The film does talk about certain serious issues faced by the queer community, but overall, it keeps a lighthearted tone.

I was provided a free screener of The Rainbow Bridge Motel for review. The opinions are my own.

The two gay leads are Darren (Cole Burden) and Dean (Chris Modrzynski). Darren is the one who ends up making the reservation at The Rainbow Bridge Motel, a location which is nothing like the romantic wedding destination Dean wants, due to a false advertisement. The motel, at risk of closing, is run by Mr. Shibbawitz (National Lampoon editor Scott Rubin).

The rest of the characters include Dean’s friends and mother, Darren’s family, his ex-wife, and a family who are in the U.S. seeking asylum. There is also a trans man getting married to his fiance at the motel. There are a ton of people around Darren and Dean which adds to the stress the couple is already feeling being stuck in the weird motel. Everything goes wrong, keeping the narrative at an enjoyable pace.

Even though this film is a comedy, there are a number of subplots which talk about certain important queer issues. Darren and Dean hesitate to show affection in public. Darren seems to experience internalized homophobia. Dean wants to try and connect his sexuality with being Catholic. The story shows everyone as human beings who make mistakes and try to learn from them.

As for any issues I found in this film, I wasn’t a fan of the gag showing a woman drinking hormones from a trans man’s thermos. I also didn’t like Darren keeping his previous marriage a secret from Dean. It went against the fact the two are supposed to love each other.

Anyway, The Rainbow Bridge Motel is a fun comedic indie film and a welcome addition to queer movies with happy endings.

The Rainbow Bridge Motel, released by Gravitas Ventures, is available on DigitalHD and DVD.