As you know,  I have a soft spot for both fan projects and female-led films.  I stumbled across a Kickstarter project called Ravager by Richard Cassidy, which fits the bill in both categories. This particular project revolves around Rose Wilson (Ravager), the daughter of the infamous assassin Deathstroke. Rose has appeared in a number of pieces of media including an episode of Arrow, but she doesn’t often get the spotlight directly on her for any significant period of time. That seems to be a trend with a lot of female superheroes, which is why I’m so drawn to fan projects that take the “risk” and shine the spotlight on them.

I had a chance to chat with Richard Cassidy and discuss some of the motivations behind the project.

1) What initially drew you to wanting to adapt Ravager for your next fan film?

Well Chris and Larry White, the directors on the project, are both constantly trying to develop something that no one has seen before. They love taking the less beloved characters and giving them more life. Ravager is not well know in the comic book world and we feel we can really explore some new ground in this fan film with her. 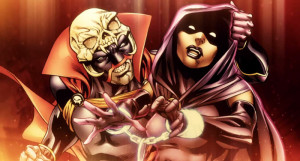 2) Most mainstream production companies shy away from producing female-led superhero films. When they do create them they tend to perform poorly and companies will use that as proof that they couldn’t possibly ever succeed. Do you think a female led superhero film could do well on the big screen?

I unfortunately feel it would not with today’s production companies that currently exist. Everything has to be sexy with the current age of women. Instead of relying on a great break through performance it feels like casting is more reliant on is she hot. I mean again we have not seen her portrayal yet but does Gal Gadot really strike you as Wonder Woman?

3) Your last project “Deathstroke: Arkham Assassin” garnered lots of views and praise. With this one you’ve stated you’d like to do better and make not just a great “fan film,” but a “great film.” Do you see yourself possibly making a mainstream Hollywood film someday or do you prefer the fan film environment?

I can’t answer that for my directors but I think they have what it takes. Just need the right company to take them on I feel.

4) Any plans after Ravager? Or are you purely focused on your current project right now?

We always have something in the tank over at AC and I know the same can be said with the folks at Going No Where. We already are batting around idea of something to do after this.

Thanks for talking with us, Richard Cassidy.

While I disagree that all of the current studios lack what it takes to make a female superhero film (lookin’ at you, Marvel, and your constant circling of Black Widow), I do agree that we need female superheroes whose strength lies beyond their sex appeal.  I’m looking forward to the finished product!